Other Lives releases a sonic adventure

Embark on a musical journey with this wandering album. 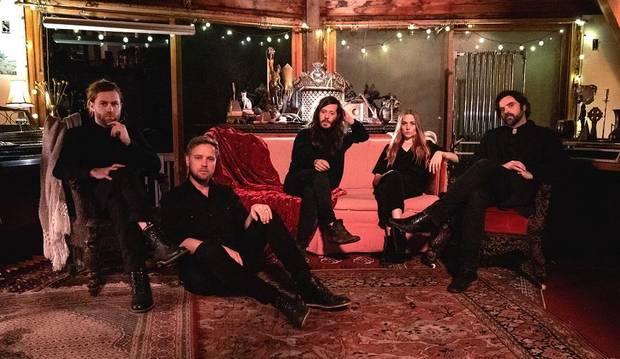 Courtesy of The Oklahoman

On April 24, Other Lives released their long-awaited fourth album, “For Their Love,” after five years of near-silence. A triumphant comeback, it features a theatric, James Bond end-credits feel, opening to lush musical landscapes that transport the listener.
SOUND OF THEIR LIVES
“Sound Of Violence” opens the nearly 37-minute album with smoky vocals and an orchestral flourish—two sonic themes that melt seamlessly through all 10 tracks. Only by listening to the first half of the song again will listeners recognize that it changes entirely by the second half—to criticize a lack of musical contrast would be like judging an ombre for lack of structure.

The album continues its dark, bittersweet, old-school-bass groove in “Lost Day.” However, this time there is a heavier downbeat. It keeps the whimsical nature while also perking the ears by adding direct contrast to the previous song. Floating above the head, it still leaves space for interpretation.

Overall, there is a healthy amount of dissonance, some unidentifiable instruments and a refusal to stick to traditional song structure. This may be what causes that James Bond feel, but it could also be the scuttling bass, ethnically-inspired interludes or weaving melodic themes that never seem to reach their conclusion.

“For Their Love” is the perfect album to listen to while going on a safari in Africa, driving a morning commute, raiding a temple, taking a midsummer road trip or even falling asleep. The lilting diversity never fails to captivate, leaving the listener with questions rather than a concrete idea of what the artist is trying to communicate. Because of this, every listener is sure to come home with something they personally relate to, or a sticky musical phrase they cannot get out of their head.
OTHER-WORLDLY MEANING
Other Lives seems to live in a musical world of their own, rarely adhering to the simple verse-chorus-bridge structure that is often exhibited in the mainstream. The lyrics lack clear correlation to real-life events, meaning that even while reading through them, it is not immediately plain what they are writing about. This is not a criticism—with room for interpretation there is a good chance everyone can connect with something in their songs.

There is a bitter taste to everything written, giving air to the depth of whatever is wrong. In “Cops,” the third track of the album, lead singer Jesse Tabish sings:

“You forgot your wallet, so the cops come rushing in/ Was a matter of a simple task, too much to ask?”

Upon speculation, it could seem that this is about a supposed overreaction to a simple mistake, not on the part of the victim, but from the outside. It takes a possibly religious turn, in the second verse:

“You didn’t learn your lesson in the good book you have read/ Was a matter of a simple rule, didn’t you think it through?”

If the good book is the Bible, it seems to be mocking this person’s religious beliefs in contrast with their mistakes. This theme runs through “Who’s Gonna Love Us” in the second verse.

“Don’t talk to me I’m silent, I/ Got fire burning in my sight/ ‘Cause when you find your love is gone/ You cannot figure how/ Who’s gonna love you now?” Tabish sings.

The fire burning leaves the writer with a feeling of loneliness for the other person, which could only be possible due to the end of some sort of relationship, whether friendship or romantic. The point is to communicate what kind of wake the boat of disaster leaves.

However, this isn’t the only theme the band addresses on the album. According to their website, “For Their Love” is about “addressing the individual and society in these turbulent times.” In “Sound Of Violence,” a broader voicing is implied, while pondering the “thread” society seems to be hanging from. There’s an undercurrent of impending disaster when Tabish opens the album with “Make some room for the afterlife,” implying the end of this life.
LOOKING FORWARD
The mood of the album seems timely, as Other Lives has canceled upcoming concerts until further notice. However, they did say on their website that they are currently making a catch-up schedule. In light of the gravity of the COVID-19 pandemic, this is the only response a band can give. In the meantime, listeners can enjoy the sonic adventure that is their latest album.