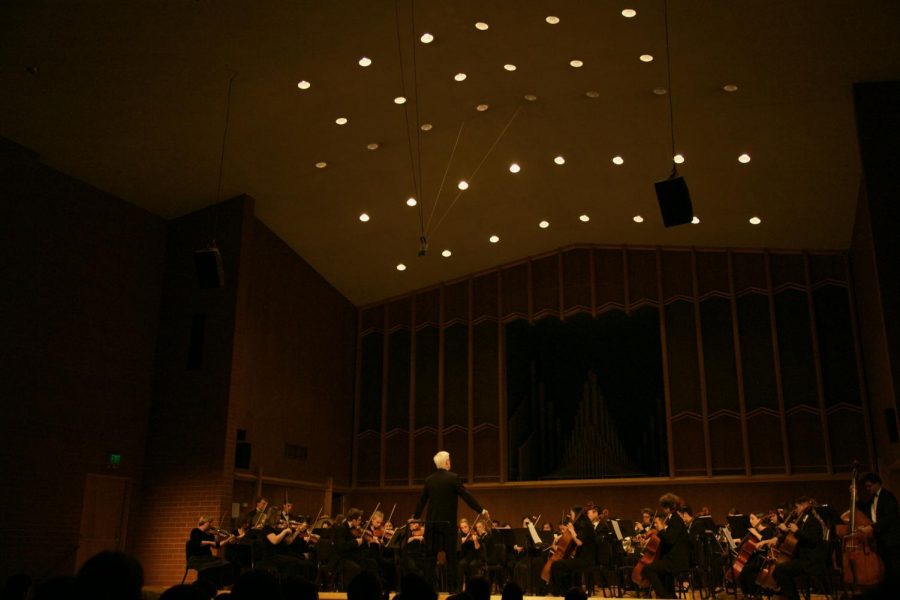 Amid the chaos of the coronavirus, Conservatory students have adapted to online education. Music majors are reeling the effects of the switch, as physical presence is an integral part of the musical learning process. But with some patience and creativity, students and professors alike are overcoming the hurdles remote education brings.
RELAXING REQUIREMENTS
Music majors typically carry a heavy academic load, many of which include a 17-18 course credit load on top of zero-credit classes, like Ensembles and Concert Music. Many also take part in a chapel band, orchestra or jazz ensemble, each of which rehearses for hours every week.

Because the coronavirus pandemic has caused the school to move all classes online, the Conservatory is relaxing some of these requirements. Concert music, which includes attendance of a certain amount of concerts every semester, is a required class for all music majors. The Conservatory of Music invites students to attend Music at Noon weekly, which features artists from around the world, and many other events, including student recitals, semester performances and ensemble concerts. The Conservatory has canceled these events, and students taking concert music have received an A for the course, even if they did not attend all of the required concerts.

They have also canceled ensembles entirely, giving students full credit for their ensemble. Because working with the groups requires a lot of in-person instruction, performing remotely is not ideal.

“The switch to remote has been pretty tricky with music because so much of that is based on in-person instruction,” said Jorden Davis, a senior music composition major. “So for all of the ensembles, all of those are just not meeting in any capacity because there’s nothing we can do remote in that format.”

One-on-one lessons have been moved to platforms like FaceTime, Skype or Zoom, leaving students to the mercy of lower-quality audio—something Davis has been experiencing with his private French horn lessons.

“All of the professors are doing as best as they can, but so much nuance is lost not being in the room with someone,” Davis said. “You can’t hear the tone quality and detail within the sound you’re making if you’re doing it through the phone.”
SENIOR RECITALS
While senior recitals are not lost entirely, they will be different. Senior commercial music major Evita Larissa is now required to record and produce 40 minutes worth of tracks to count toward what would have been a live, hour-long performance. She is doing it on her own in Indonesia, with a 14-hour time difference from La Mirada, as well as keeping up with her other 18 credits of work. She loses the performance experience and, as a result, has to put in extra work to accomplish the unexpected task set ahead of her—commercial music majors usually rehearse with a band made up of other students to perform their set.

“I am making my own tracks and everything,” Larissa said. “Some people have friends they can do it with, but most people are doing it on their own.”

Unlike Larissa, Davis does not have the benefit of showcasing his work through a performance. Composition majors would usually conduct an hour-long recital of pieces they have written throughout their time at Biola, but the switch to online learning does not pose a feasible alternative since Davis needs a large group of musicians to play his piece. For half of the recital, Davis was supposed to conduct a piece that the orchestra would have played live and a few small ensemble pieces for the other half.

“At the moment, I don’t seem to have any alternatives beyond just showing the sheet music for the adjudicators to look at,” Davis said. “They’ll give comments as normal, but no actual performance. Across the board, a whole lot is lost in this kind of format.”
PROFESSORS’ ADJUSTMENTS
The adjustment, though both emotionally and academically difficult for students, presents challenges for the professors as well. Professor of music theory and trumpet player Robert Denham is thankful for how everything has worked out so far.

“I think that it worked out well to have Missions Conference week as a buffer for us to all prepare for the last six weeks of the semester,” Denham stated in an email.

Thanks to this “buffer,” many professors were able to catch their breath and plan the rest of the semester. Denham also sees ways this interruption to normalcy can benefit the Conservatory.

“All in all though, I see faculty thinking in new and innovative ways,” he said. “A ‘jolt’ like this is never something we would welcome to our routines with open arms, but it does give us an opportunity to rethink what we do in a way that we wouldn’t have done otherwise!”

Davis, a teaching assistant for his music production class, has demonstrated this by using Facebook to connect with students via calls and group messaging. This way, he can answer questions for the class all at once instead of replying to separate emails.

“I’m trying to find ways to try and still be useful in a class that is hard when you’re not there in person,” Davis said.