Corey apologized for his response to racial inclusion that may have been seen as insensitive or hurtful. 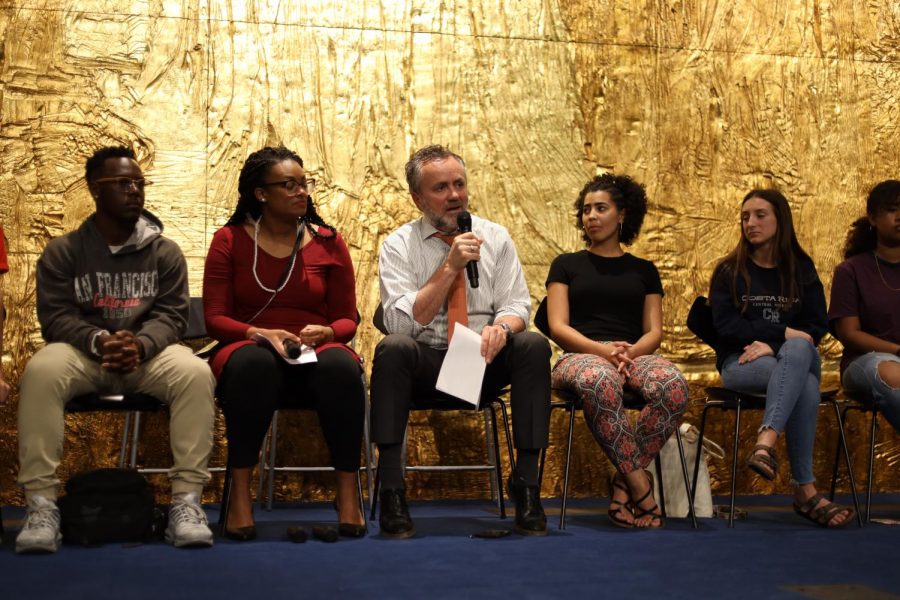 This afternoon via a school-wide Google Meet livestream, President Barry Corey announced the launch of an institutional diversity strategic plan and apologized for coming off as oblivious in the past in regard to racial issues and inclusion on campus.

Chief Diversity Officer Tamra Malone explained that this is the first strategic plan for diversity that has been approved by the Board of Trustees. It includes 33 recommendations and highlights four themes created by 27 faculty, staff and students from various disciplines. The group studied why the previous two diversity plans failed to reach approval.
UNITY NOT UNIFORMITY
Corey reminisced on an event on March 11 where students shared their concerns about diversity on campus.

“A student asked me why I didn’t speak up sooner when a racially insensitive comment was posted on an anonymous social media website,” Corey recalled. “Another student, a senior about to graduate, recounted the many times he’s called his mother over the years, wanting to quit, but she said ‘No son, just persevere.’ So I was reminded that night, March 11, that as a Christian university, above all, we aspire to embody the love of Christ and we do this by coming to know and love one another in all of our diversity.”
COREY APOLOGIZES
“I thought I understood it way more than I really did,” Corey expressed. “I know some of the things I said back then were meant to be inviting, but now they seem like I was oblivious. Frankly, actually, there were times when I said things that I probably could have said in a different way, or sometimes I didn’t say anything at all because I was afraid I might say the wrong thing.”

Corey sought out advice from Malone in the past to better understand how to navigate difficult conversations.

“Sometimes I felt like, ‘What if in my sincerity I come across as insensitive and hurtful?’ and I really wanted to do this well,” Corey said. “Tamara has been so helpful for this and I’ve just learned that if I’m made aware that my words or my actions hurt somebody else, I want to acknowledge it and repent it. We need to work hard not to offend, and we need to work just as hard to forgive if we’ve been offended.”

Corey reminded the community that there is a need for attention to a “healthy Christian diversity,” which has risen out of many conversations he has heard on campus. He restated multiple times how vital diversity is not only for a community, but for Christians.
MALONE’S PERSPECTIVE
Malone noted her experiences at Biola, including her time spent as a student and the culture shock she faced, coming from a Baptist background. Malone empathized with students who feel marginalized and said she believes Christians must not pit diversity and unity against each other.

“Yet as Christians, God has called us to pursue diversity and unity differently, not as an ‘either or’ but as a ‘both and,” she said.
CABINET MEMBERS SPEAK OUT
Malone invited each member of the President’s Cabinet to share how they are implementing the strategic diversity plan within each area of the university.

Provost and Senior Vice President Deborah Taylor explained that she plans to diversify required course texts. Taylor confirmed there is approved funding to provide a faculty advocate or team of advocates for pedagogical advice for specific academic disciplines and in individual teaching styles.

Vice President of Student Development Andre Stevens said a discrimination and harassment policy was added to the Student Handbook.

“We’re one of the few institutions that did not have a separate discrimination and harassment policy, so I’m grateful for the good work and collaborative work of our team,” Stevens said.

Vice President of University Operations and Finance Mike Pierce expanded on the need for a diverse and inclusive work environment. Pierce added that gender inclusion is also important within his division and within the university as a whole. Pierce said Chief Human Resources Officer Dave Grant will be engaging across all levels of the institution to ensure consistency and fairness throughout hiring practices.

Vice President of University Marketing and Communication Lee Wilhite elaborated on a new partnership with the Hispanic Association of Colleges and Universities, as Biola is attempting to fulfill the HACU’s requirements to become a designated Hispanic Serving Institution. Biola is currently 21% Hispanic, which means the university needs to increase the Hispanic population to 25% in order to be compliant with HSI standards. Wilhite said there is a group of 12 thought leaders across the university committed to recruiting Hispanic students and giving them “a great experience.” Wilhite said Biola wants to not only be “Hispanic serving but a Hispanic graduating institution.”

Vice President of Advancement and Strategic Planning Adam Morris confirmed that 450 donors supported students who needed emergency support due to COVID-19. The donors collectively contributed $100,000 for the emergency relief fund and the fund assisted 150 students.

Morris also said his team is finalizing the case for diversity support and sending the strategic plan to the donor community. This allows donors to partner with specific efforts to engage in diversity across campus and promote change through funding. Morris also confirmed a partnership between the Office of Advancement & Strategic Planning and the HSI task force.

A THEOLOGICAL PERSPECTIVE
Dean of the Faculty for Talbot School of Theology Scott Rae and Director of Intercultural Education and Research Walter Augustine represented Talbot during the livestream. Rae explained that differences are important to forming who we are and emphasized that the coming kingdom includes every tribe, tongue and nation.

Augustine elaborated on the second part of the diversity statement by saying our “relationships of mutual interdependence” emphasize a need for unity and harmony. He also expanded on the ways sin thwarts harmony and encouraged students to read the statement for themselves on Biola’s website.
TIME FOR ACTION
Loraine Ho, the Student Government Association’s diversity and inclusion coordinator, closed the conversation by sharing that she is confident in the university’s leaders to promote diversity and inclusion.

Dean of Spiritual Development and Campus Pastor Todd Pickett and Director of the Center for the Study of the Work and Ministry of the Holy Spirit Today Oscar Merlo concluded the meeting by praying.

“This is a biblical vision and it’s a beautiful vision of community and of diversity and it draws me, it should draw you, persons from every tribe and language and people and nation as we see in Revelation 5,” Pickett said.
COMING UP
The Biola community will receive a recording of the event and a community feedback form. The form will ask for individual responses regarding the event and diversity practices on campus. The university hopes to create a frequently asked questions list and begin to search out answers for students, faculty and community members.