The Eagles’ season was full of memorable moments that are etched in BU history. 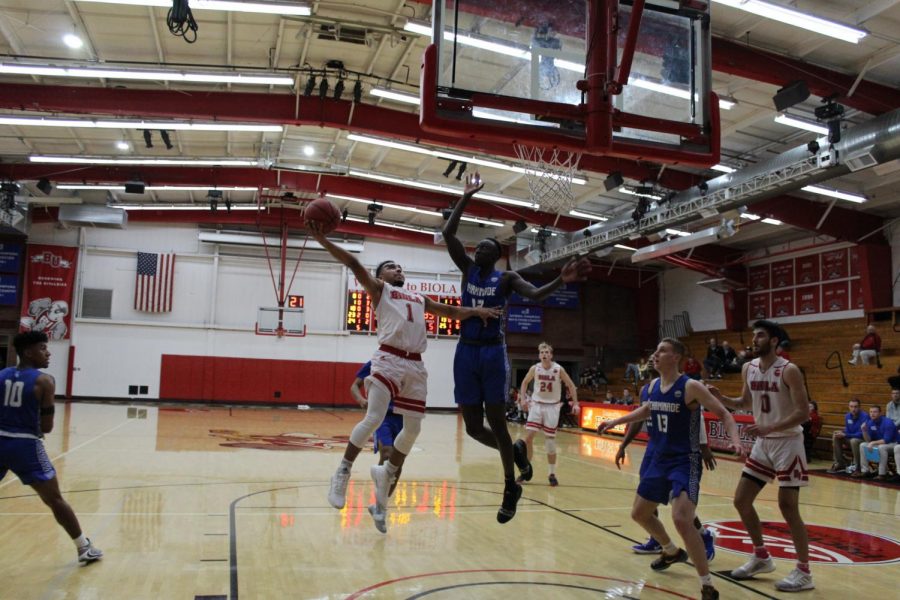 Men’s basketball’s 2019–20 season was one to remember. This year, head coach Dave Holmquist led his team to a 19-12 record (13-9 PacWest) and a first-ever PacWest tournament berth. While there were plenty of ups and downs, the Eagles’ success could not be overlooked.
CHAMINADE CLASSIC
The Eagles began to flourish in early January in Honolulu, Hawaii. The four-overtime game against Chaminade University became an instant classic in Biola history and one of the most memorable moments of the 2019–20 season.

The matchup between the preseason No. 3 Silverswords and No. 5 Eagles would prove to be key for the rest of the season. On BU’s end, an away win against a Top 3 team in the conference would not only boost their record, but also their confidence early in the season. Despite the Eagles’ domination early in the game, and their nine-point lead at half, the back-and-forth nature of the game forced it into overtime.

With the pressure increasing as the time ticked down, sophomore guard Chris Rossow rose to the occasion, scoring the game-tying bucket in the first overtime. Then in the second overtime, after the Silverswords took the lead from the free-throw line with only three seconds left, he dashed down the court to receive a long outlet pass and hit a little floater to force the third overtime as time expired. Rossow was not finished—in the fourth and final overtime period he nailed a 3-pointer from the corner to give the Eagles a six-point lead and the 113-107 win in Honolulu.
HOLY NAMES DOMINATION
Toward the end of the season, the Eagles’ dreams of reaching the PacWest tournament were seeming all the more real. While the top three spots in the tournament were secured by Azusa Pacific University, Point Loma Nazarene University and Chaminade University, the bottom three spots were still up for taking.

The Eagles took control of their own destiny, winning their final four regular season games and securing the No. 5 seed in the PacWest tournament. While all four games were key regarding which seed they would land up in, their win over Holy Names University clinched the playoff spot for the Eagles.

The Eagles dominated throughout the whole game, and even had a 26-point lead in the second half. With only six minutes left, Rossow made a layup on the fastbreak that put the Eagles over the 100-point mark for the third time of the season. Holmquist’s team took care of business in the final minutes and won the game 113-102.
ALL OVER AZUSA
Despite being the underdogs of the PacWest tournament, BU pulled off the biggest upset of the weekend when they defeated No. 1 seed APU, after being down 20-2 in the first five minutes.

The Eagles bounced back from their extremely slow start and cut the lead to 10 by the half. Then within the first three minutes of the second, they had the score to within two after a layup from sophomore guard Alex Wright. The game was back and forth throughout the rest of the half, and eventually was tied at 72 with five minutes left.

While the Eagles had the lead throughout those final five minutes, a 3-pointer from APU’s junior guard Terrence Becvar tied the game again with 57 seconds left. Both teams then missed layups that would have given them the lead before Holmquist called a timeout with 22 seconds left.

After the timeout, Wright received the ball from the inbound, dribbled off a screen from Bagatourian and drove baseline. He whipped the ball back to Bagatourian, who caught the ball right behind the 3-point line and nailed the game-winning 3-pointer right before time expired, sending the Eagles to the PacWest tournament finale.

In the PacWest championship game, the Eagles fought valiantly against No. 2 seed Point Loma. The two evenly matched teams went to overtime, where BU led by one point with only 13 seconds left. Despite incredible team and individual defense, PLNU sophomore guard Brock Mackensie made a game-winning three as time expired, ending the Eagles season. No matter the outcome of the finale game, the Eagles’ season was one to remember.