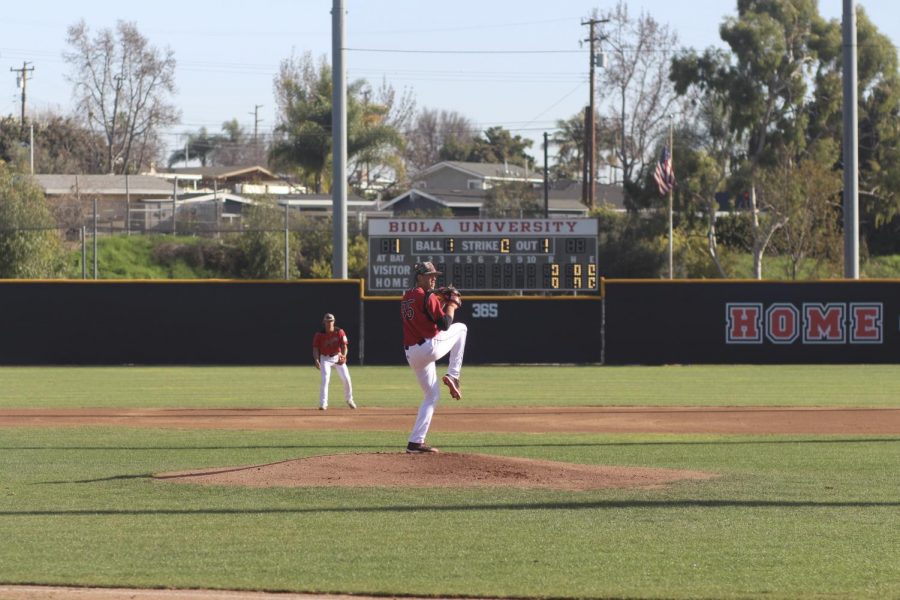 After the suspension of all Biola Athletics competition, athletes are left stunned.

The sudden spike of COVID-19 cases in the US has not only shut down our nation’s schools and businesses, but it has also put a hold on the sports world, where teams of all levels are on a hiatus.

The NBA, NHL, MLB and NFL have all pushed their seasons back with hopes of beating the virus. With professional leagues taking significant action, it was only a matter of time before the collegiate sports world made a statement too.

To take precautionary measures, Biola Athletics officially announced on March 15 that all spring sports will suspend all competition, effective immediately. This was in accordance with the PacWest and the NCAA, which have canceled all sporting events, including March Madness, to prevent the spread of COVID-19 among players, staff and fans.
STUNNED SENIORS
The call for action follows the Centers for Disease Control and Prevention’s guidelines to prevent the spread of COVID-19. The hiatus has put an abrupt end to athletes’ seasons—and for many, this spring 2020 season was their last.

Before the virus arrived on US soil, athletes were solely focused on playing the best level of competition they could, with hopes of ending up in postseason play—something Biola had just been granted to compete in this year.

“Our new coaching staff instilled in us a sincere belief that this would be the beginning of a decade of dominance for Biola baseball,” said senior pitcher Joey Leavitt. “This translated to an incredible confidence on the field. And with several key players dealing with injuries, we were certain that once we were all healthy and able to reach our true potential we would be unstoppable.”

However, just 14 games into their season, competition was shut down, leaving in-season athletes distraught.

“We’ve been playing, training and sacrificing for this game since we were little kids, and many only dream of being on a team like this one,” Leavitt said. “Having our season come to such an abrupt end is heartbreaking.”

Paula Damas, a senior pitcher with Biola softball, has been perfecting her craft for 15 years. Now, Damas can only wonder what the outcome of her senior season could have been.

“It is disappointing, as is the whole situation,” Damas said. “We all knew this team was special and we were excited to see how the rest of the season was going to play out for us. I definitely planned for my senior season to go differently, but God clearly had a different plan.”
DIFFERENT APPROACH?
The COVID-19 virus still presents a lot of unknowns. Because of the uncertainty surrounding the length of time it will take to contain this virus, the NCAA decided to cancel all spring sports instead of postpone play. Other leagues came up with a different plan for action.

“I think the best course of action [for Biola] would have been to mirror the decisions of MLB and their suspension until mid-April,” Leavitt said.

But while professional sports leagues may push their seasons to continue into the summer, Biola Athletics and other collegiate sports leagues decided to scratch the remainder of the season since expanding the season after school is out could cause challenges.

“I wouldn’t say that I agree with the NCAA or Biola, but I understand that they are looking out for the well-being and health of student-athletes and with how this virus seems to be progressing,” Damas said. “Although, I do understand it does not take away from the fact that we were disappointed when our season was canceled.”

Even with the abrupt halt in Biola Athletics, competition will continue, it is just a matter of time. Damas said what matters for the time being is focusing on the health and safety of the country.

“Everything happens for a reason,” Damas said. “And at the end of the day, this is a sport and compared to what is going on in the world right now, I understand why it all ended the way it did.”