President Corey and Chief Diversity Officer Tamra Malone respond to a plethora of concerns that has been plaguing Biola's campus. 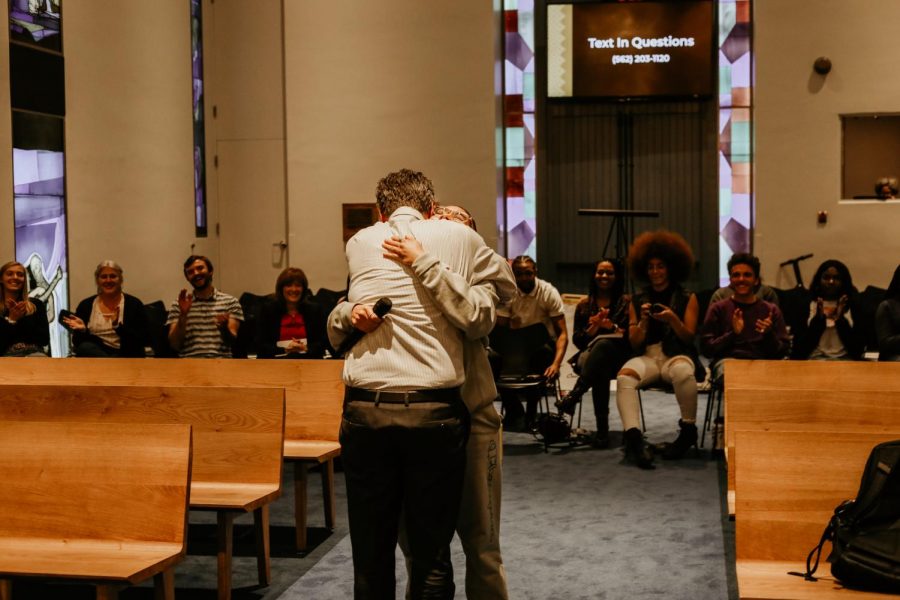 “Use ‘I’ statements, don’t interrupt, suspend judgment, speak up and listen up, affirm those who speak, show respect and extend grace.”

These were the ground rules established by students and faculty present at the Lament Session that took place Wednesday night at Calvary Chapel.

Sparked by the recent defacing of Horton Hall’s Black History Month posters, the President’s Office and Division of Diversity and Inclusion held the school’s first event aimed toward helping affected students through the pain following the incident. The Division of Diversity opened the panel up to discuss racial hurts that take place on Biola’s campus as a whole.
PHYSICAL CUES
Gospel Choir Director Aja Grant opened the session in worship with “How Great is Our God.”

Hoping to establish the panel as a space for attendees to be vulnerable, students from Biola’s Black Student Association encouraged a “posture of openness” by reorganizing Calvary Chapel’s chairs into a large circle and instructing all attending faculty to sit in between two students.

Sitting between students of color in the middle of the stage was President Barry Corey. Next to him was Chief Diversity Officer Tamra Malone, who led the students into a session of sharing.
“I’M SO TIRED”
First to speak was Marissa Vasquez, vice president of affinity group “Unidos.” Coming from Boston, Massachusetts, the junior sociology major shared that she feels like she stands out negatively on Biola’s campus because of the way she speaks, dresses and expresses her opinion.

“I’ve been here for three years and I’ve never ever said this out loud in my life, but I didn’t have a good experience here to be honest,” Vasquez said. “I just feel so different here, it’s hard for me to express who I am. I’ve tried to hide my accent, I’ve tried to dress differently, I’ve tried to stop listening to music that I like to make people feel more comfortable around me and I’m tired of it. I’m tired, I’m tired, I’m so tired.”
THE STUDENTS SPEAK
After Vasquez, students volunteered their stories one by one. Malone later said she noticed there seemed to be a shared dissatisfaction for the authenticity of Biola’s student body and distribution of Biola’s funding.

“Whether conscious or unconscious, Biola’s message to us has been disappointing because you would spend $14,000 on a lip-sync competition, but SCORR was missing funding this semester,” Roberts said.
BIOLA’S SILENCE
Multiple students at the panel expressed concern about the length of time it took for Biola to release official statements about both Horton Hall’s vandalism incident, as well as xenophobic remarks made toward Asian students via social media about the coronavirus.

“When Biola didn’t say anything for such a long period of time, I felt like their silence spoke volumes, I felt very invisible and I thought that the school didn’t care,” said junior Christian ministries major Erin Lee.

After the panel, Lee was approached by members of Biola’s faculty as well as a representative from the Biola Counseling Center to learn more about how they could assist her through her experience.

Malone shortly described Biola’s response system to the students, saying that the members of Biola’s Division of Diversity could not confirm the vandal’s intent because the posters had both racial slurs such as the N-word as well as uplifting statements such as, “This is a great quote!” Malone said the school had to carry out a more in-depth investigation before responding.
DIVERSITY MATTERS
In closing the session, Malone invited students from the panel to Sutherland Auditorium on April 16, where the university will announce plans for a new diversity program.

“When I was a student, I too thought that SCORR should be made compulsory,” Malone said. “But I now realize that you can’t feed a baby meat if they are only able to drink milk. This is what the upcoming program is for.”