One of the oldest Spanish Bibles comes to Biola for the 41st annual Hispanic Conference. 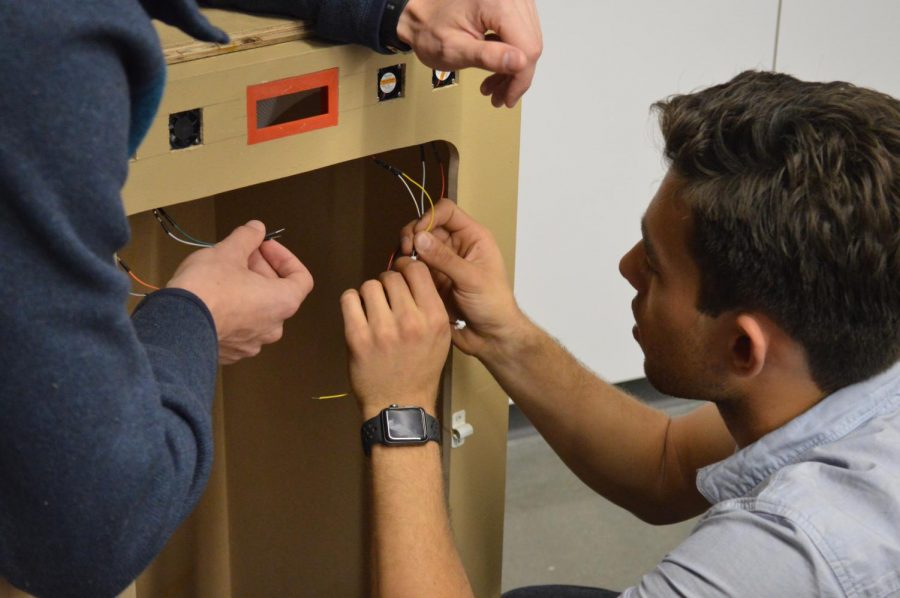 The team works alongside each other to create the complex display box.

A team of engineering students built a controlled humidity box to house one of the first Spanish translations of the Bible, which will be on display in Biola’s library on March 12th. This project was a part of a directed research class and was completed by four students to keep the cost of displaying the Bible low.
THE TASK
As part of the 41st Hispanic Conference on March 28 sponsored by Talbot School of Theology, Biola is bringing in a 500-year-old Spanish translation of the Bible. The text, La Biblia, que es, los Sacros Libros del Vieio y Nueuo Testamento, or the Bible of the Bear, is being loaned to Biola from the Museum of the Bible in Washington, D.C.

Junior engineering physics major Schuyler Montgomery said that the museum specified certain conditions for the space the book is kept in, such as keeping the book at 55% humidity and blocking radiation to preserve the book’s condition. These requirements can get costly for a smaller institution like Biola.

“The Smithsonian, or a big museum like that, might have a professional display case with the humidifier built in and everything, and that case might cost three to four thousand dollars,” Montgomery said. “Since Biola is only having one exhibit for a short amount of time, it wouldn’t really make sense to buy that whole mechanism, so they asked us to make one to meet their specific needs.”

Sophomore engineering physics major Audrey Tseng said that the project was scary at first due to the quick deadline and how much there was to learn in order to complete the project. However, she said it was rewarding to learn from her other team members and input from current and past professors.
THE PROCESS
Sophomore engineering physics major Nathan Chism said the project helped him apply the skills he wanted to learn in creative ways that he would not have learned in a textbook. The team was given an end goal without a manner to get there, forcing the students to generate unique designs and solutions.

“At some point you have to have creative ideas,” he said. “To be able to work as a team and just sit down and brainstorm and try and sort through ideas and see what works, I think it’s been cool because you don’t really get that in a classroom.”

The team also had to combine different techniques to make the box work.

Montgomery also said he enjoyed the opportunity to collaborate with other departments like the library and art department. The Bible will be kept near the main entrance of the library on Thursday after art students work to make the box more visually appealing.

But Chism said the team ultimately hopes the box serves to highlight the centuries-old artifact inside, not the engineering work behind it.

41st HISPANIC CONFERENCE
This conference is funded by Talbot to train Spanish-speaking church leaders in Southern California. This year’s theme is “La Palabra de Dios: Permaneciendo por siglos y todavía relevante.” The conference includes sessions led by keynote speaker Carlos Martínez-García and other workshops led by both Biola faculty members and others involved in local Spanish ministries. The conference will be held in Sutherland Auditorium.