The Eagles’ phenomenal 2019-20 season sets the pace for the future. 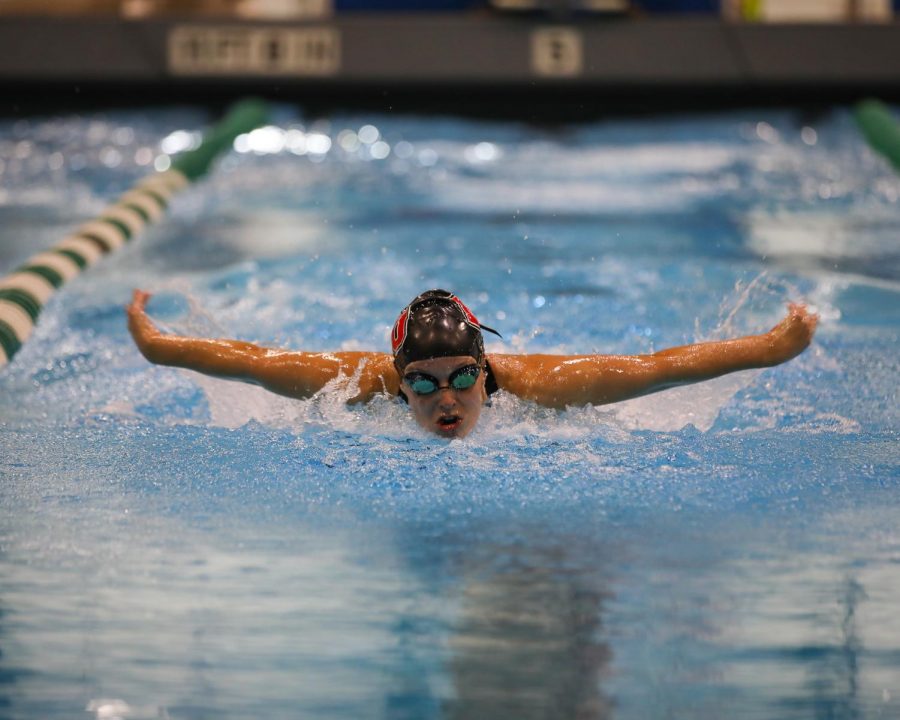 Biola swim and dive wrapped up their 2019-20 season after a stellar performance in the Pacific Collegiate Swim & Dive Conference Championships back in mid-February. The men and women consistently shattered records throughout the season, turning heads toward the darkhorse sport many have skipped over in the past.
NCAA STANDALONE SWIMMER
Katelyn Harper, a sophomore swimming sensation has earned herself a spot in the NCAA Division II Swimming and Diving Championships, the first ever Biola swimmer to be competing in the event. The freestylist and IM swimmer has been a leader for Eagles Aquatics this season. Harper said she first heard she had been selected to compete in the championships when the NCAA released the invitation list on Feb. 26.

“The moment that that list came out, my coach texted me with the news,” Harper said. “I was completely overjoyed, it had been back and forth for weeks whether I would be invited. At practice that day, my whole team was so excited and congratulated me.”

The Eagles kicked off their season back in early October at the PCSC relays and pentathlon by winning the combined team championship relay and placing third overall in the pentathlon. But the real accomplishment? Four lady Eagles beat Azusa Pacific University by 3.5 seconds in the 500-yard relay, earning the second-place quartet.

“I believe we did that so well because we wanted to succeed together,” Harper said. “We fight for each other, not just as individuals.”

Biola continued to carry their early successes into the Slug Shootout at UC Santa Cruz, where both the men and women placed second overall and won five different events. Super swimmers Liza Parahnevich and Gabe Weber were standouts at the event. Parahnevich swam at an elite level, winning the 200 IM, 100 backstroke and the 200 freestyle. Weber performed with similar intensity, bringing home first place in the 500 and 1,000 freestyle.

After a quick one-day turn around from the Slug Shootout, the Eagles crowned themselves the Bay Area Invitational champs after winning the event with flying colors. The men led all other teams by scoring a total of 899.5 points at the meet. Adding on the women’s 820 points, the Eagles collectively ended the meet with 1,719.5 points. The second closest score was a 581-point difference, where UC Santa Cruz placed second with 1,138.5 points, paling in comparison to Biola.

The Eagles won eight individual events collectively at the Collegiate Winter Invite. Both the men and women placed first overall in the invite as well. Parahnevich and Weber were yet again at the center of all the hype. Parahnevich broke the 200 backstroke record, swimming a new best time of 2 minutes, 5.20 seconds. Weber swam a whole 10 seconds faster than the previous school record that was held for six years. He clocked in at a split of 9:44.06 during the 1,000 freestyle. Three other Eagles broke school records during the invite as well.

The big meet took place in mid-February, where BU competed in the four-day long PCSC championships. Both teams earned the bronze medal, placing third out of 14 teams, and more importantly, the women beating out APU by one point for a spot on the pedestal. The men’s relentless relay squad took home second place in the 400 relay after setting a new school record with a time of 3:05.04.

“Both the men’s and women’s teams overcame a ton of adversity and made it arguably the best season in the history of both programs,” said head coach Ryan Kauth.
BU RECRUITS SECTION
WOMEN

With the Biola swim and dive team on the rise, Kauth is bringing in 14 new recruits to add an extra edge of talent to the Eagles’ era of dominance. His goal is to expand the depth of both the men’s and women’s team into a supersquad of swimmers who will have an immediate impact going into the Conference Championship next year.

“The expectation is that they arrive in September prepared to train, compete at a high level and ultimately mesh into our culture of continued success,” Kauth said. “We look for recruits who are driven in and out of the pool, competitive and Christ-centered. I believe this incoming class has those qualities, and will bring a lot to both of our programs.”

Mudd has been awarded several first-team all conference awards as well as first-team all-state for her academics. She was named the Colorado 5A Jeffco league swimmer of the year for the 2020 season. Mudd specializes in the butterfly and IM, but is also putting in long training hours in the water to perfect her backstroke, one she wishes to make a top event.

“I am excited to see what I am still able to do in the pool, dropping times and pushing myself like never before, but I have high hopes that BU swim is going to help me athletically, academically, spiritually, and I hope that I can carry all of those lessons with me for the rest of my life.”

Tolman is a highly decorated senior, soon to be freshman Eagle. She won MVP the last four years in a row for women’s varsity swimming. The team captain has broken three school records and was also awarded the Valley Oak League Champion in the 200 IM and 100 breaststroke since 2019. As a junior, Tolman swam in the CIF State Championship swim meet. She is a versatile swimmer, able to compete in the 100 breaststroke, IM, freestyle and butterfly.

“I [wouldn’t] be able to achieve any of these things without my great coaches, loving team and family, and trusting in God,” Tolman said. “Through the amazing Biola swim program, I pray that I will be able to go to [the] NCAA finals, and hopefully [the] Olympic Trials of 2024. With the fantastic coaches and teammates, I know I will be enjoying my time in the process.”