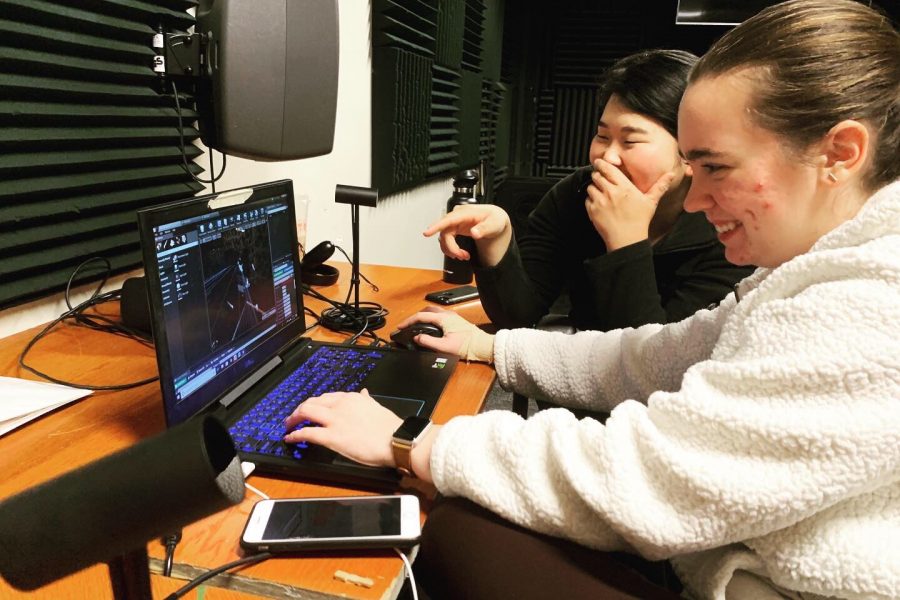 Imagine the intimidating yet mystifying feeling that comes with flying alone for the first time. “Avion” allows users to relive that experience. In the span of about 10 to 15 minutes, the virtual reality experience takes users on a journey through the skies. In the story, a lonely child experiences his or her very first solo airplane trip, flying to meet their mom for Christmas.

Though virtual reality is a frontier still relatively new and unexplored on campus, senior cinema and media arts major Megan Scott built “Avion” as a VR story for her senior thesis project. Through the project, Scott explored her passion for virtual reality storytelling, gaining experience in her field and making valuable connections.
CHRISTMAS CHRONICLE
Taking place on Christmas Day in the 1960s, Avion’s atmosphere reflects the time period through the project’s fashion, art and music. The user interacts with various people and objects throughout the story, such as their father, toys and a stewardess, while experiencing the loneliness that comes from being from a broken family. While on the airplane, the user longingly watches a mystical dream sequence of a family made out of raindrops take place as they gaze out the window.

VR varies from normal films in that it allows users to interact with the story and complete different tasks to further the plot. Wanting to craft a story she had never seen before, Scott used her flights home to the Midwest as inspiration for creating “Avion,” a story told from within an airplane.

“I love flying and seeing the aerial views and I was like, ‘Why has nobody told a story from the sky before?’” Scott said.
TALENTED TEAM
As Scott quickly learned, creating a virtual reality experience requires extreme collaboration. Luckily, students, professors and alumni alike poured in their efforts to help bring her vision to life. Sophomore cinema and media arts major Seth Bergen and alumnus Forrest Clark worked closely with Scott as producers for the project, and the team obtained help from computer science majors to work out bugs and errors they came across. Art majors also served as concept artists to create storyboards for the project.

“It’s been really cool to be on a college campus because you realize that you need everybody,” Scott said. “It’s not just film majors. It’s really taking a lot of people and recognizing their skill sets and showing them how they can use that in VR.”

Managing a team of 30 to 40 people was intimidating, but Scott says it taught her the importance of teamwork.

Much of the process was trial and error, and figuring out what you don’t know, according to Scott. At one point during development, one corrupt mesh in the system stopped an entire scene from opening, leading Scott to spend the whole weekend examining every single object in the scene to find the one corrupt piece.
PASSION PROJECT
“Avion” is not only Scott’s senior thesis project, but her passion project as well. She has grown more fond of the virtual reality world since being launched into it her sophomore year, when she was challenged to build a VR scene during her internship at video and animation studio Botka Collective. Since then, Scott has helped kickstart a VR lab and an on-campus VR club, while gaining additional experience through a program with Oculus VR. In addition, she served as the executive producer for the 2019 Biola Film Festival, which gave her valuable experiences to employ in the VR world.

“They seem like very different things, but in the end, you’re building an experience that you want people to enjoy,” Scott said.

Scott completed a prototype version of “Avion” in December. Currently, the team is in the process of optimizing the project, making adjustments where needed and deciding what their next step is. With the new game design concentration and VR lab and club up and running on campus, Scott hopes “Avion” is only the beginning of virtual reality at Biola.