The No. 5 seed Eagles fought their way to the PacWest championship game. 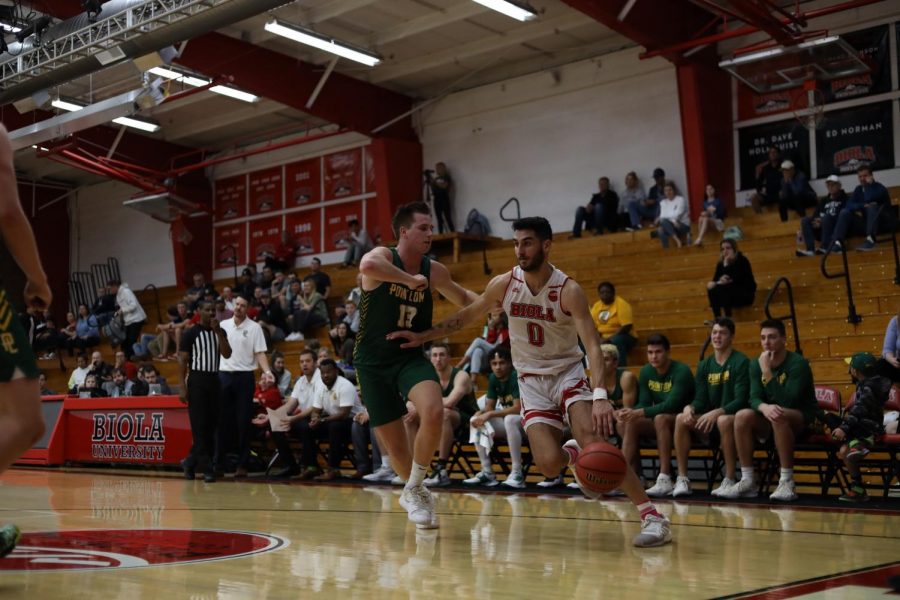 Biola's Cinderella story was led by junior Michael Bagatourian, who hit the game-winning three to defeat APU and send BU to the championship round.

The PacWest tournament took place from March 5 to 7, a grueling weekend where the Eagles faced top-tiered competition. The Eagles were in an underdog situation, not expected to make a considerable run. However, Biola channeled all the stamina and determination they had prior to the postseason and rode the momentum straight into a thrilling victory over rivals Azusa Pacific University during the semifinals.

BU rounded out their 2019-20 season in late February with a thrilling four-game winning streak after failing to find a consistent rhythm early on. Clocking out of the regular season with a 17-11 overall record, the Eagles squeaked their way into the NCAA Division II PacWest tournament at No. 5, an event they have never entered before.
MAKING HISTORY
The Eagles began their postseason Pacwest quest with a first-round matchup against Concordia University Irvine. Facing a hard defensive team in CUI, Biola combated their resistance with a big second-half scoring shootout—even without the standout senior guard Marquise Mosely, who had been benched multiple games prior to the tournament, due to injury. Yet, the Eagles adjusted well, even in the face of an unfortunate circumstance.

“We seem to have found the rhythm, so we were just trying to turn heads and go as far as we could,” said sophomore guard Alex Wright. “We knew it was going to be tough but we were ready for it.”

Junior guard Chris Rossow showed up in Mosely’s shoes, putting up a season-best 31 points during the battle against the Golden Eagles, which led Biola to advance into the second round of the tournament.
THE BIG DANCE
Moving deeper into the tournament meant matching up against tougher talent. BU would now claim a date with rivals Azusa Pacific University in the semifinals. After losing to the Cougars twice during the regular season and APU riding on a 20-game winning streak, earning a victory over the No. 1 seed would prove no easy task.

“In the warm-up everyone’s legs were already tired because we had played a game just the day before,” Wright said. “But we were all just focused, we were all just locked in. We knew what we had to do, our game plan, our personnel. We knew they wanted to win, but we went after them.”

The Eagles started the semifinals down 20-2, showing signs of yet another defeat by the Cougars. Yet, BU didn’t back down, and they faced APU with composure. The game went down to the wire, but junior guard Michael Bagatourian came in clutch with the game-winning 3-pointer to grace the Eagles with the victory over APU.

“It felt good, not going to lie,” Bagatourian said. “But we knew right after the fact that when we were celebrating in the locker room, we told ourselves we had to get ready for tomorrow.”

Biola not only knocked Azusa out of the PacWest tournament, but from their National Championship hopes. Head coach Dave Holmquist praised his team for their concentration during their first high-level tournament.

“The team kept getting better,” Holmquist said. “We hit a good percentage of our shots and played hard, so I was happy with how we stayed with it and stayed focused even when we were down.”
‘WE’LL BE BACK’
A quick turn around left little to no time for BU to prepare for the PacWest finale against PLNU. The Eagles had already played through two tough games against two great teams, and then had to face a dominating offensive team in Point Loma less than one day after. Yet, BU fought through fatigue and took to the big stage determined. They continued their impressive run and gave Point Loma a scare. A tied score of 37 at the half translated into the remainder of regulation, where both teams kept exchanging leads.

It wasn’t until the final four minutes of regulation where BU took off and held a comfortable 13-point lead over the Sea Lions. However, their run was short lived, and PLNU fought back from the deficit, going 5-5 to end regulation and send the finale into five extra minutes. It was an offensive battle during OT that unfortunately ended in a heartbreaking loss at the buzzer for BU.

“We fought hard to the last second, it was just a tough loss,” Wright said. “But it is nothing to hang our heads about. No one thought going into it that a first-year eligible program would go that far into the championship game.”

The Eagles now recognize their own potential, and the experience they gained from the tournament will translate well for them heading into the upcoming seasons.

“I think it is good for us, it’s an experience thing,” Bagatourian said. “Even though we would have liked to have come out with that win, and it does hurt, we learned from it and we take it in the off season knowing that people are coming back and we have a chance to do it again and win it all this time.”

BU might not have taken home the gold, but they were the Cinderella story of the entire tournament—the No. 5 seed taking second place in an overtime heartbreaker. It’s safe to say the first-timer Eagles have made waves in the PacWest, and don’t show signs of slowing down in the future.

“A common thread for all of us on the team is that we’ll be back,” Wright said. “We got a taste of [the championship] this year, but we want to do so much more.”