The Eagles upset No. 1 APU before losing to PLNU in the finale. 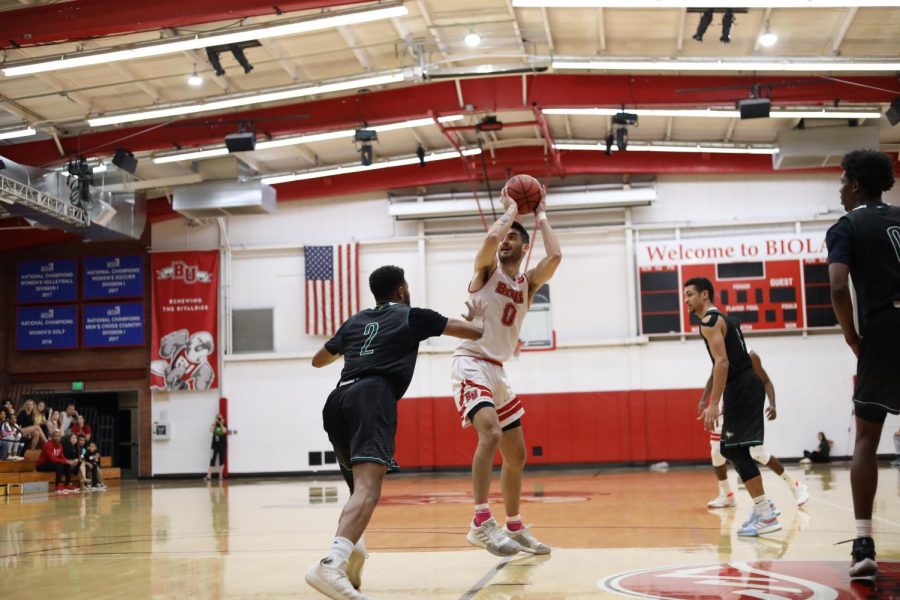 Men’s basketball competed in the PacWest conference tournament on March 5 to 7 for the first time in school history,  placing second in the tournament and showing they belong as one of the top programs in the conference. The men’s team pulled off the upset of the tournament, beating No. 1 seed Azusa Pacific University in the semi-finals before losing at the buzzer against Point Loma Nazarene University.
TOURNAMENT TO REMEMBER
Men’s basketball entered the tournament as the No. 5 seed, slated to take on No. 4 seed Concordia University Irvine in their first match-up on Thursday, March 5. The Eagles won this game 86-77. Junior guard Chris Rossow led the way with 31 points, filling up the major gap left by injured senior guard Marquise Mosley. Rossow dominated throughout the tournament with his quickness and tenacity on both ends of the floor.

His performance earned him a spot on the PacWest All-Tournament Team. Sophomore forward Alex Wright and junior forward Michael Bagatourian were placed on the All-Tournament team along with Rossow.

Things began looking grim as the Eagles’ faced off against No. 1 seed Azusa Pacific University in the second round. The Eagles had lost both regular season games against APU. The Cougars pounced early, jumping out to a 20-2 lead to start the game. However, BU battled back and cut the lead to just 10 points by halftime. With 12 minutes left in the game, Rossow made a fastbreak, and-one layup and free throw to take a 59-58 lead for the Eagles.

The game was back and forth down the stretch. Both teams took and lost the lead up until there was only 51 seconds left and the game was tied at 79. APU’s junior guard Brennan Rymer missed a layup with just 30 seconds left, which opened the door for BU to win the game.

After the Eagles’ head coach Dave Holmquist called a timeout, the ball ended up in Wright’s hands. He drove baseline and drew a double team from the Cougars, which opened a passing lane to Bagatourian. Wright made an incredible play to whip the ball back to Bagatourian, who nailed the game winning 3-pointer with just four seconds left on the clock. With this 82-79 win, the Eagles advanced to the PacWest Conference Tournament finals against Point Loma Nazarene University.

Bagatourian ended this game with 20 points and seven rebounds while Rossow once again filled the bucket, dropping 27 points along with seven assists. Wright had a double-double with his 13 points and 12 rebounds
MARCH MADNESS
Much like the semis, the finale was a back-and-forth battle between BU and PLNU. So much so that despite a 13-point lead for the Eagles with only three minutes left in the game, the Sea Lions never went away. They tied the game with 30 seconds left and took the game to overtime.

In overtime, the Eagles struggled to create on the offensive end. However, their solid defense kept them in it until the end. With only 13 seconds left, Rossow made two clutch free throws to tie the game at 91. But in the final seconds, Point Loma’s sophomore guard Brock Mackenzie banked in a prayer shot from behind the arc to win the game for the Sea Lions. Mackenzie was named Most Outstanding Player of the tournament.