Both the men and women controlled the Hawks in back-to-back victories. 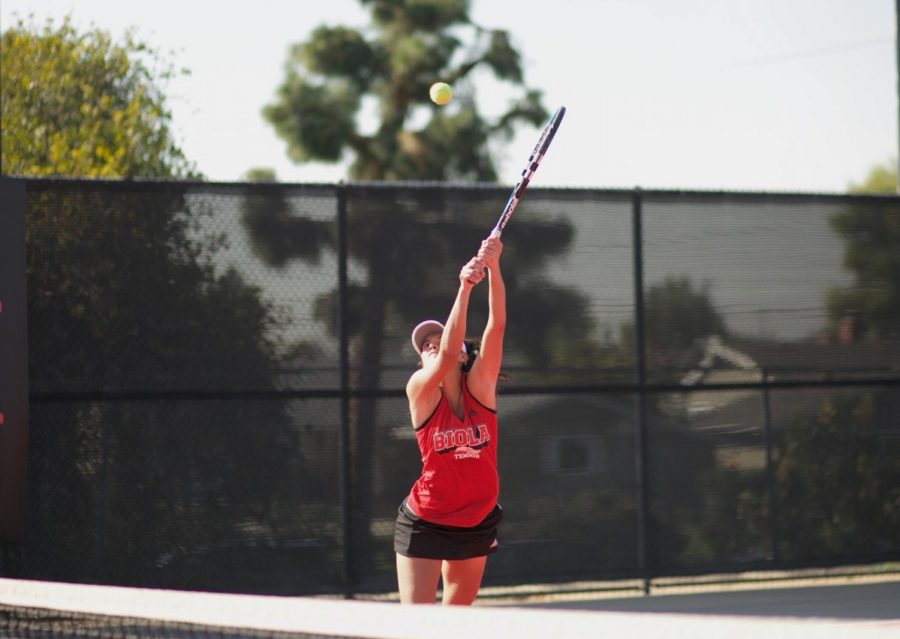 Eagles’ tennis hosted Holy Names University on Friday afternoon in a men’s and women’s doubleheader. The women set the tone, shutting out Holy Names in a clean 7-0 sweep. The men followed with the same intensity, winning their game 5-2.
LOCKED IN
The women’s doubles matches were controlled entirely by the Eagles. Freshmen Colbeyshae Emery and Brooke Fager earned the No. 1 doubles match after a thrilling 6-3 victory. Senior Lauren Lee and sophomore Ines Diaz continued the Eagles’ success and defeated their No. 2 doubles opponents, 6-4. Senior Allison Torres and junior Madison Swaney won by default due to the lack of a No. 3 doubles opponent.

All six singles matches were a breeze for the Eagles. Emery took down her No. 1 singles opponent in two quick sets, winning one 6-0 and the other 6-2. Fager clenched her No. 2 singles victory with ease, winning 6-3, 6-4. Diaz rose above her HNU athlete, 6-4, 6-4. Both Lee and Torres defeated their singles opponents after two sets, 6-1, 6-2. Swaney won by default in the No. 6 singles due to the absence of a Hawk athlete.

The men found success in the doubles matches, where they dominated Holy Names across the board. Sophomore Alexei Prokopchuk and senior Edwyn Ramos played out a tight No. 1 doubles match and secured the 7-6 victory. Junior Logan Blair and sophomore Andres Meneses found the same result, and defeated their No. 2 opponents 7-6. Junior Quentin Lau and senior Derek James rounded out the doubles with a 6-3 win, clenching the team’s doubles points for the afternoon.

The women (5-5) will return to the Biola Tennis Center on Saturday, Feb. 29 at 11 a.m. to take on California State University, Stanislaus. The men (5-3) will travel to San Diego, California on Monday, March 2 at 1 p.m. to take on the Point Loma Nazarene University Sea Lions.