The Eagles rose to No. 2 in the PacWest conference with a win over Fresno Pacific University. 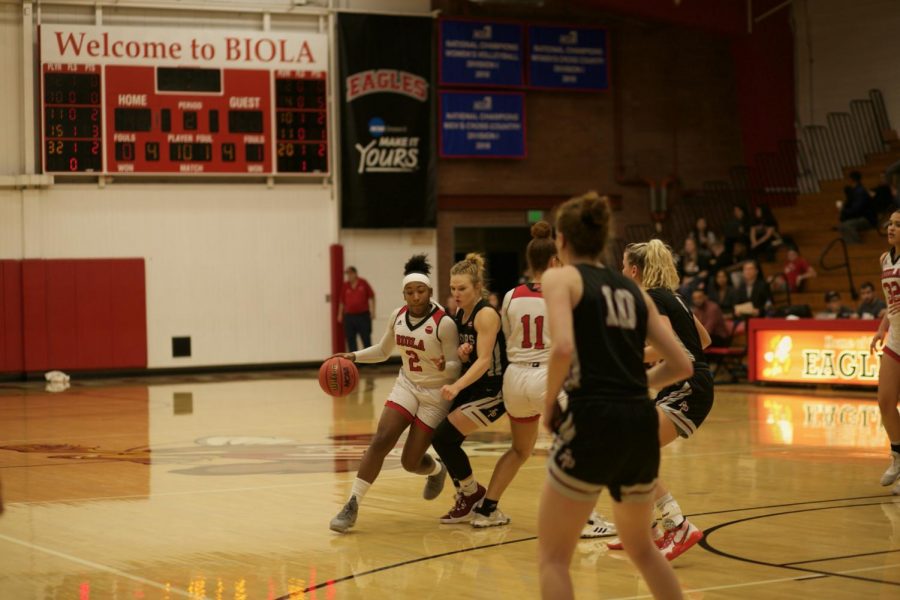 Senior guard Jelissa Puckett dribbles the ball around her opponent.

Women’s basketball secured a clutch win in the fourth against Fresno Pafcific University Monday evening on the Sunbirds’ homecourt, 61-56. The Eagles’ victory tonight places them at the second seed in the PacWest conference with just one game left in the regular season.

Senior guard Tatum Brimley charged the Eagles, shooting 5-10 from deep, contributing to her 22 points on the night, along with four rebounds and three assists. Sophomore guard Aysia Johnson almost hit double-double territory, scoring 10 points and racking up eight rebounds and three assists. Freshman forward Madi Chang and junior forward Jazz Benn combined for 16 points in the Eagles’ win.
EAGLES SNAG SUNBIRDS
The night began with a push from FPU. Poor field-goal shooting from BU allowed Fresno Pacific to advance past the Eagles, who were 3-17 from the floor. The Sunbirds found themselves on top after the first quarter of play, 13-9. Biola pulled themselves together at the start of the second quarter, raising their shooting average to 45.45%. The Eagles put themselves in a better position to make a run, only down one at the half, 22-23.

The game remained tight throughout the third. Fresno Pacific continued to make subtle gains with help from the bench, who scored 18 points on the night. However, Biola stole the momentum from the Sunbirds, carried throughout the majority of the game and came into the fourth quarter in attack mode. 8-9 shooting from the line helped push the Eagles to pass FPU, outscoring them 20-12 and ultimately winning the game 61-56.

The Eagles (18-9 overall, 14-7 PacWest) will take on the No. 1 seed Concordia University Irvine Golden Eagles on Thursday, Feb. 27 at 5:30 p.m. at Chase Gymnasium in their final regular season game before the PacWest Tournament beginning on March 5.