The Eagles showed no mercy to the Hawks as they soared into today’s 49-point victory. 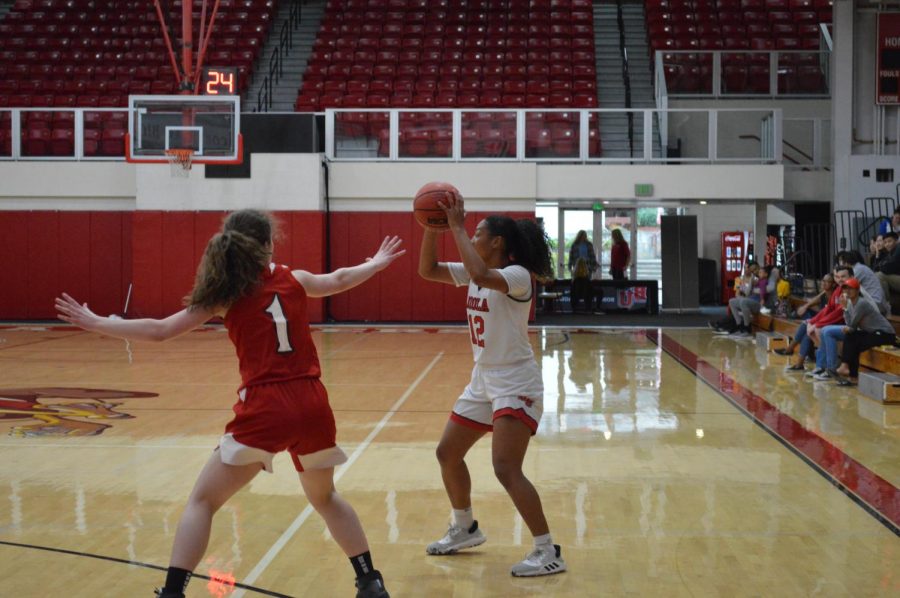 Biola hosted the Holy Names University Hawks women’s basketball team at Chase Gymnasium this Saturday afternoon. The Eagles played strong from start to finish against the Hawks and increased their lead through every quarter. Biola collectively executed 24 steals and 17 assists to contribute to this afternoon’s 80-31 victory.

Sophomore guard Aysia Johnson came close to a triple-double, contributing 10 points, 10 rebounds and seven assists for the Eagles. Following was freshman guard Stephanie Lee, with 16 points, four steals and four rebounds. Senior guard Tatum Brimley came in hot with 17 points for Biola in addition to two steals and three rebounds.
HOLY NAMES HAVE NO HOLY GAME
In the first quarter, Biola came out with high defensive energy going into a man-to-man, then switching to a zone. Johnson made a steal off the fast break to assist Brimley for a 3-pointer that made the Hawks call for a time out.

Only two and a half minutes in, the Eagles had a six-point lead and continued to fluster the Hawks both on defense and offense. The quarter continued and the Eagles were relentless in their efforts to steal and rebound the ball. The last bucket of the quarter was a buzzer beater by senior guard Jelissa Puckett to close the quarter 23-7.

The second quarter started with a steal by Brimley, followed by a layup. Biola communicated at a rate of efficiency that was unmatched by Holy Names’ defense. The Eagles put up another 29 points in the second quarter, a result of their defensive energy and aggression on the full court press. The half ended with the Eagles having a 41 point lead, 52-11.

“Our main priority was defensive energy and rebounding,” said head coach Alan Nakamura. “That’s [what] really turned the game our way, was our energy on the press. Right from the start, we rebounded really well and that created a lot of good looks on offense.”
HAWKS FLY… BUT EAGLES SOAR
Biola continued their offensive flow into the third quarter, despite the Hawks finally starting to play a little bit of defense. The Hawks made a small and underwhelming comeback of 10 points. However, the Eagles quickly put Holy Names to a grinding halt by putting up shots from behind the arc and getting points off of their turnovers. This furthered their lead to 67-21 to end the quarter.

Entering the fourth quarter, the Eagles were prepared to finish the game strong and wouldn’t let any easy baskets pass them by. In the first eight seconds, Lee stole the ball and followed with a jumper at the elbow to get the momentum rolling. Junior forward Jazz Benn continued with an offensive rebound in addition to a layup.

The crowd was out of their seats as they watched Johnson and Lee sink deep threes in the fourth quarter. The team as a whole played with high intensity, great communication and spectacular defensive energy, resulting in the final victory, 80-31.

“Today our goal was to hold the team to under 37 points and we really did that today,” Johnson said. “Our press was really effective, we got a lot of steals and we just moved the ball really well. My coach has been stressing a lot about offensive rebounding and moving the ball altogether so that was my number one goal today.”

The Eagles (17-9 overall, 13-7 PacWest) will compete against Fresno Pacific University at the FPU Special Events Center on Monday, Feb. 24 at 5:30 p.m.