The event served as a reminder of the prophetic call to freedom, justice and truth. 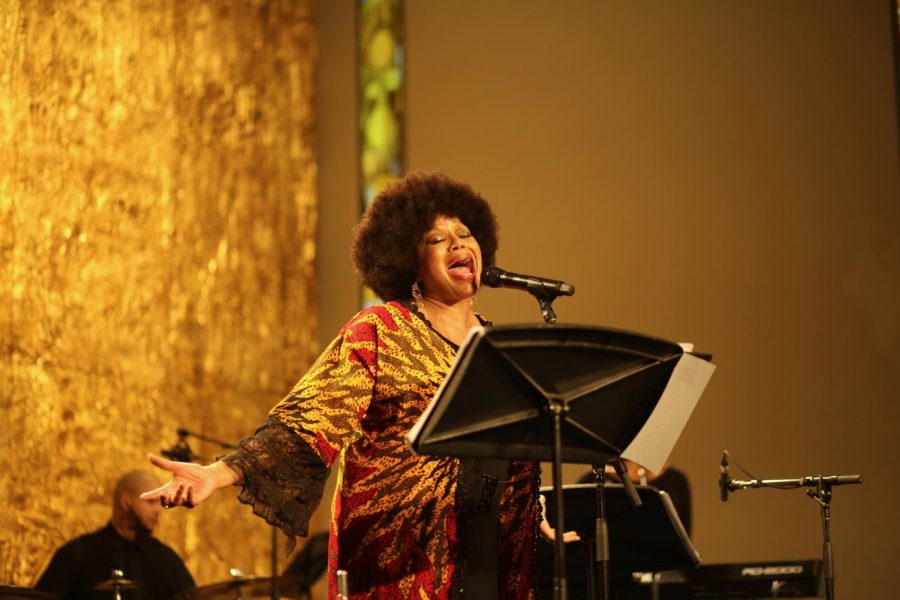 Biola welcomed the West Coast debut of Frederick Douglass Jazz Works, presented by vocalist and composer Ruth Naomi Floyd and her team of musicians on Thursday. The band, joined by orator V. Shayne Frederick and dancer Elyse Browning, came to campus to celebrate Black History Month and kick off the annual SCORR conference through Floyd’s original musical compositions.
CAPTIVATING WORDS
Floyd strode onto the stage wordlessly, with queen-like authority, her earrings glinting in the light of Calvary Chapel’s warm glow. Then, she sang.

“I prayed for 20 years, but received no answer until I prayed with my legs,” Floyd sang.

Hailing from Philadelphia, Pennsylvania, Floyd said she was raised by Baptist parents who cared deeply about bringing their children up in music. Floyd sings and plays a variety of instruments, including the flute, piano and bassoon. Her diverse musical experience was clear throughout the performance, as in one piece, she played the flute while humming.

Each piece of music morphed into the next, with intermittent recitations of portions of speeches written and spoken by Frederick Douglass. Orator V. Shayne Frederick was poised and firm throughout the concert and performed Douglass’s “Farewell to the British People,” “West India Emancipation,” his letter to Harriet Tubman, “Freedom” from the “Narrative of the Life of Frederick Douglass,” “What the Black Man Wants” and “What to the Slave is the Fourth of July?”
CREATIVE TRUTH-TELLING
Saxophonist Keith Loftis brought the audience back together with a soaring anthem after almost every piece, preparing the audience for the vocal performances.

“I will not sit still and be quiet. I lift my voice to speak and write on your behalf. I will not turn away. I will suffer with them. I know victory shall be mine,” Floyd sang.

When Valerie Gay joined Floyd in vocals, the harmonies were haunting and ominous to match the tone of Douglass’s work in freeing his people.

The horrors of slavery were physically represented through dance after the orator concluded a recitation with an emphasis on “whip, scarred, millions.” In an all-black, backless top, Browning faced the stage and emulated a slave being whipped. Every movement of her back was visible as she writhed in pain, collapsing and flailing. The room was breathless at the raw expression of excruciating pain.

Douglass’ well-known work, “What to the Slave is the Fourth of July?,” was met with knowing laughter and vocal response from the audience. Moans, murmurs and shouts of “Yes!” filled the room. The spoken word was broken up with the tune of “Yankee Doodle,” as the group created a musical dissonance.

The conclusion of the event was met with thunderous applause and a standing ovation at the depth of emotion and passion.