Spring Symposium kicks off with an interracial relationship panel

Four interracial couples spoke about the difficulties and benefits of their relationships. 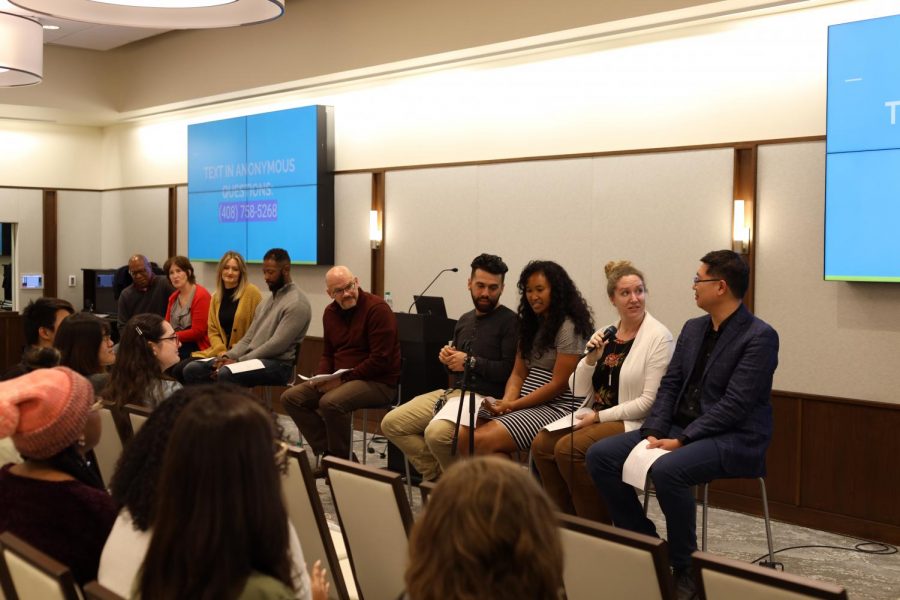 This year, Student Enrichment and Intercultural Development and the Student Government Association teamed up to present the Spring Symposium series on how to have grace-filled conversations. The series consists of three panel discussions, which they call ‘breaking the ice,’ followed by a student-led discussion over a meal, called ‘breaking bread.’ The series started on Monday with “Navigating Interracial Relationships II” in Andrews Banquet Hall, attended by 30 students.
THE EVENT
Author, speaker and research consultant Tim Muehlhoff from the Center for Marriage and Relationships moderated the panel. The panel consisted of four couples: Andre and Beth Stephens—married for 28 years, Victor and Camille Hernandez—married for five years, Madison Huebner and James Givens II—dating for five months and KiYong and Carolyn Kim—married for 10 years. They discussed questions regarding their families’ reactions to their relationship, how they handle cultural conflict and what the benefits of interracial relationships are. While the answers varied from couple to couple, some common themes that emerged were the discovery of faith as a common ground between cultures and the decision to try to understand their parents’ perspectives.

“If you’re a child of abuse or a child of parent with really toxic mentalities, then when the Bible says, ‘Honor your parents,’ you have to let them go and give them to God and pray that God is able to change their hearts,” Camille Hernandez said. “Another way to honor them is that you end the cycle of abuse, you end the cycle of racism and you end it by focusing on yourself and the next generation.”

Another common statement was that interracial relationships broadened their worldviews for the better.

“Be ready to move around your worldview, because often if you’ve grown up in one context the entire way you see the world, from how you understand humor to how you interpret theology to how you live life, is from that worldview,” Carolyn Kim said. “You have to be intentional about asking and learning and not just presuming.”
THE GOAL
This series is intended to continue the talk given by Director of Intercultural Education and Research Walter Augustine after Biola’s Martin Luther King Jr. Day chapel about proper posture during difficult conversations.

She said the next two symposium discussions in March and April will focus respectively on how to have political conversations and how to talk about immigration and hospitality. She said the goal of having these conversations is “coming to a common ground…even if at the end of the discussion we don’t totally agree with each other.”

This concept of finding common ground will be the focus of the discussion over a meal the week after each panel. This month’s meal will be catered by a local soul food restaurant, in honor of Black History Month. These discussions will be in small groups moderated by LEAD scholars to help keep the conversation flowing.

“What we envision for it is to bring in different ideas to people’s minds that might have never crossed their minds before, [so they will] want to be curious about it and explore it,” Juarez said.