Grab your brooms! Biola completes the four-game sweep of UCCS

The Eagles dominated on the mound and hit when it counted on Saturday. 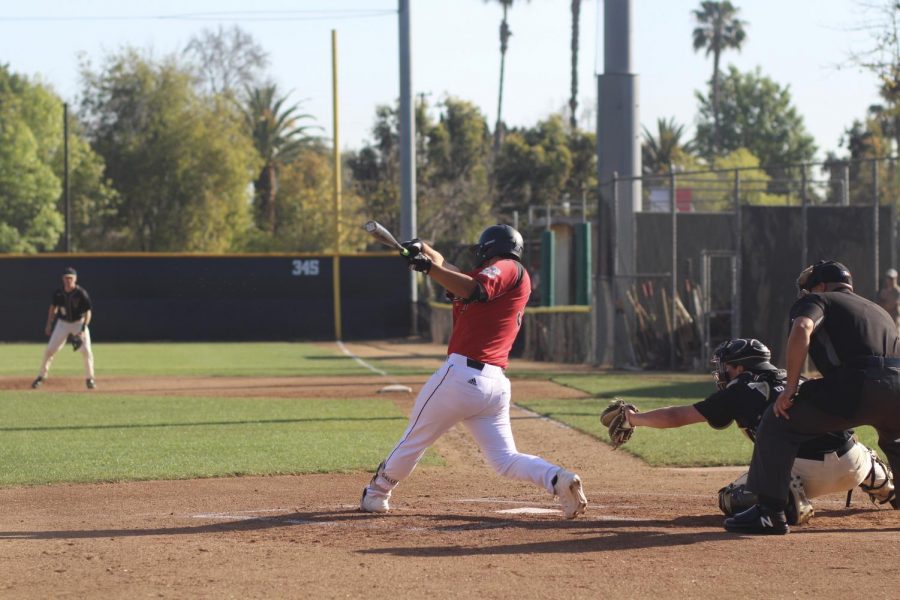 Biola baseball was back at it again on Saturday, finishing their series with University of Colorado Colorado Springs Mountain Lions with another two games. After showing no love on Valentine’s Day with a sweep of the doubleheader, the Eagles looked to do the same in these games. The Eagles looked to continue playing well, as they had only lost one game coming into Saturday’s action. The games on Saturday were low-scoring and showcased good pitching. Biola prevailed in both, taking game one by a score of 3-2 and game two 2-1.
GAME ONE
Game one was one of the oddest games to take place on a baseball field. Both teams were held scoreless through six innings and the pitching on both sides was dominant. Senior starting pitcher Joey Leavitt was great in this one. He worked into the seventh only allowing five hits and one run while striking out two. However, he wound up with a no-decision due to lack of run support. The Mountain Lion’s starter carried a no-hitter into the sixth before being removed in the seventh.

The strange aspect of the game came in the bottom of the seventh inning. Biola came into the inning hitless and would finish the inning hitless… but with a run on the scoreboard. Senior third baseman Jacob Portaro began the inning by drawing a walk. He then advanced to second base via a wild pitch. Junior first baseman Jackson Collins worked a great at-bat before eventually grounding out to the right side and advancing Portaro to third base. Junior shortstop Connor Kostecka proceeded to hit a sacrifice fly and drove in a run. The next batter grounded out to end the inning.

The Eagles eventually got their first hit in the eighth and took the lead with two runs. UCCS scored one in the ninth, but ultimately Biola took the game 3-2.

“Coming back from my last start, the biggest difference was just attacking the string. We have a string set up in our bullpen. The main objective was keeping the ball low. I was actually telling myself that after every single pitch and we had a lot of success after that,” Leavitt said. “All glory goes to God. He is the reason why I am able to play this game.”
GAME TWO
Game two was cut from the typical nine innings to seven due to the dwindling lighting at Biola University. Freshman right-handed pitcher Andrew Beauvais got the call for this one and he performed well. He only went three innings but only allowed one hit and one unearned run while walking no batters.

On offense, junior designated hitter Ryan Gallegos led the charge with a solo home run in the first. UCCS scored their only run of the game in the second. Both teams did not score again until the sixth inning when junior second base man RobertAnthony Cruz hit the go-ahead homer, which gave the Eagles a 2-1 lead. They would not look back, as sophomore right-handed reliever Tyler Mead pitched an inning and a third to shut the door for the Eagles. Mead also earned the victory in the game, striking out three batters.
GRAB YOUR BROOMS
With the four-game sweep of the Mountain Lions, Biola (9-1 overall) improved their current win streak to five games. The team has been rolling on all cylinders and looks to keep up their outstanding play on the road against the University of Hawaii Hilo (2-4 overall, 2-0 PacWest). The series will begin on Friday, Feb. 28 at 5 p.m.