The Eagles stepped up when it mattered most on Friday. 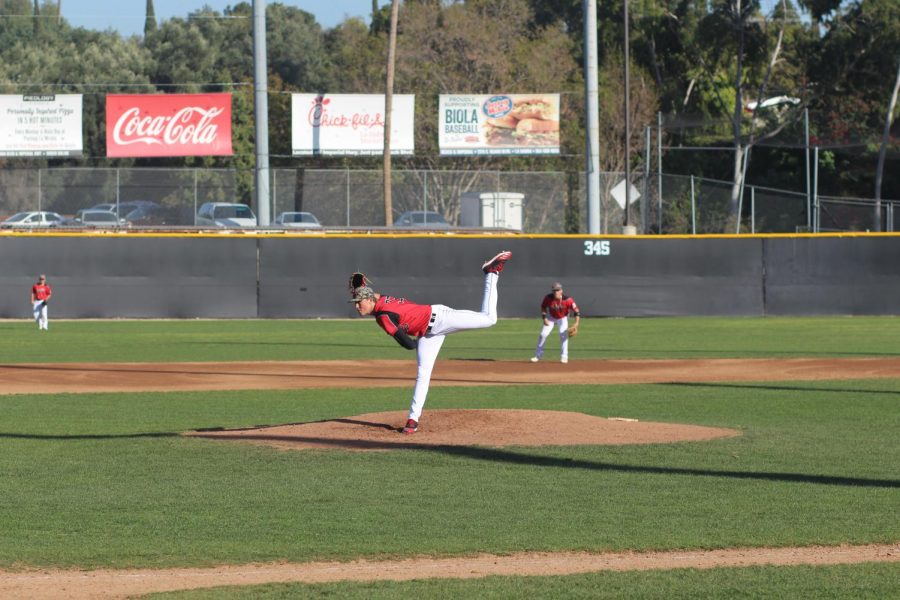 Biola baseball opened up a four-game series on Friday against the University of Colorado Colorado Springs Mountain Lions. The team entered Friday’s action with momentum, as they had won Thursday and looked to carry that momentum into the weekend. The four-game set will consist of two doubleheaders in consecutive days on Friday and Saturday, so Biola needed to kick off the first day with a bang. That’s exactly what they did by winning game one 6-5 and game two 3-0.
GAME ONE
Game one was intense, exciting and ended in dramatic fashion. The Mountain Lions scored in the top half of the first to take a quick lead. In the bottom half, junior second baseman RobertAnthony Cruz got the party started for the Eagles with a solo shot to knot the game up at 1.

As the game rolled on, Colorado Springs took control of the game and led 4-2 after five innings. In the seventh, Biola’s offense woke up. Senior outfielder Andy Van Antwerp smashed a two-run home run to tie the game and junior catcher Ben Smith followed with a home run to give Biola the lead, 5-4.

The Mountain Lions had some clutch moments of their own. They hit a home run in the top of ninth to tie the game once more.

This was the definition of a “back and forth game.” In the bottom of the ninth, senior third baseman Jacob Portaro came up with the bases loaded and promptly drove home the winning run with a base-hit, giving Biola the win 6-5.

This was an offensive showcase of power and drama. Game two would prove to be just a tad different.
WHO STOOD OUT?
Van Antwerp had a day to remember in this one. He went 2-3 with a home run and two RBIs to go along with a walk. Van Antwerp has been heating up as of late and hopefully he can continue seeing the ball well.
GAME TWO
Game two was only seven innings long due to the long day of baseball and dwindling light at Biola’s field.

Fans who appreciate low-scoring affairs with excellent pitching and good defense would have enjoyed game two. Sophomore left-handed pitcher Larson Kindreich got the ball in the second game and he showed why he is one of the most trusted arms on the pitching staff. He allowed a double in the first inning but did not allow any runs. He would only allow two more hits the entire game. The Mountain Lions attempted to rally in the seventh after a double. However, Kindreich would not crumble in this one. He struck out the next two batters to finish the shortened complete game and seal the 3-0 victory.

The offense did not provide as much run support as they did in the first game, but they still got the job done. Van Antwerp led the way once again with a two-run home run. Junior designated hitter Ryan Gallegos also homered and Cruz finished a 2-3 line at the plate.
WHO STOOD OUT?
Kindreich was simply electric in this one. His fastball sat around 85 to 89 mph, with his breaking pitches clocking in at as low as 69 mph. He kept everything low in the zone and only intentionally climbed the ladder with his fastball, which typically ended with a strikeout.

“Colorado is a really good team, so we had to attack hitters and Larson did a great job of that in game two,” said head coach Jeff Calhoon.

Kindreich finished with an astounding 15 strikeouts, compared to only one walk in only seven innings of work.

“We competed at the plate and our two-strike approach was really good. Nineteen out of our 25 at-bats in game two had two strikes and our on-base percentage was over .400, so we did a really good job of executing the plan,” Calhoon said.
WHAT’S NEXT?
Biola will close out the four-game set with UCCS tomorrow. Game one’s first pitch is scheduled for 11 a.m and game two is scheduled for 2 p.m.