The Eagles hang on to beat the Silverswords in the remaining minutes of a thrilling five-point victory. 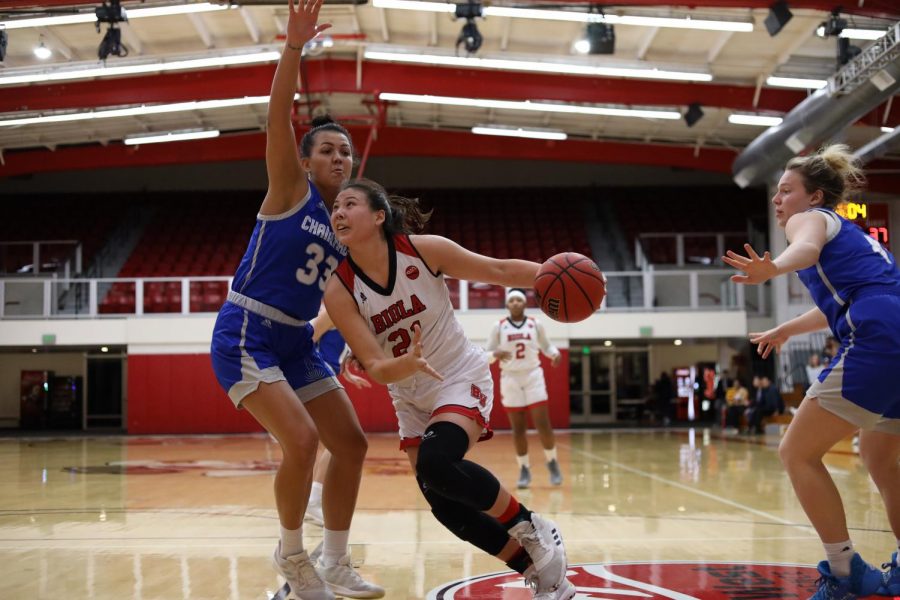 Freshman forward Madi Chang dribbles the ball around her opponent from Chaminade University on February 13th, 2020.

Women’s basketball hosted Chaminade University of Honolulu at Chase Gymnasium Thursday evening. Despite struggling in the first half from a slow start to the zone defense, the Eagles regained their communication and finished the half strong. Carrying this momentum into the second half, Biola became increasingly aggressive and controlled the court offensively, pushing them into the lead, finishing tonight 66-61.

Dominating the court tonight was freshman guard Stephanie Lee, going 7-10 from field goal range and 4-7 from 3-point range, bringing her to a grand total of 23 points. Following her teammate in the paint was freshman forward Madi Chang, going 5-7 from the field and totaling 13 points as well as four rebounds. Senior guard Tatum Brimley aided her team in tonight’s victory with 12 points and four assists next to junior forward Jazz Benn crashed the boards tonight with 10 rebounds.
TOO CLOSE TO CALL
In the first quarter, Biola was off to a slow and sloppy start due to disorganized defense, which complicated their on-court communication and transition into their offense. Scoring the first bucket for the Eagles was senior guard Jelissa Puckett with a 3-pointer. However, Biola still trailed by two points despite their efforts offensively. With three seconds left in the quarter, a guard from Chaminade hit a buzzer beater 3-point shot to keep Biola in a two-point deficit at 15-17.

The second quarter is where the Eagles found their rhythm and started their comeback against Chaminade. Biola continued to fluster the Silverswords on defense, leaving them frustrated and distraught. The Eagles scored, stole and rebounded their way out of their point deficit, tying the game 21-21 at a time out, to then end the half at an outstanding 36-31.

“I think the key part of the game was when we finished the second quarter strong with great defensive energy,” said head coach Alan Nakamura. “The players were working as a unit and we forced a couple of turnovers and scored off of the turnovers giving us a lead at half time. Second half was really even, the end of the second quarter was really key to the game.”
DOWN TO THE FOUL
With another stand still going into the second half, both teams were not ready to give up. Nine minutes into the third quarter, Lee pulled up with a 3-pointer to get the crowd roaring as Biola held their small lead. The Eagles prioritized their defense and covered Chaminade’s shooters, however, tonight’s efforts resulted in several turnovers for both teams both from personal and team fouls. The quarter ended with the Eagles in the lead 51-45.

In the fourth quarter, Chaminade brought every ounce of fight they had left in the game. Over the course of four minutes, Biola’s lead was at extreme risk of one point at the two-minute mark—with the score at 61-60. Lee got fouled three times in the last minute of the game and made five free throws, securing Biola’s win of 66-61.

“I feel like we started off a little slow,” Lee said. “We kind of let them come back in the game a little bit in that third quarter and I feel like we just had to mentally get into it again and build our lead up again towards the end.”