Both the men’s and women’s tennis teams found defeat at the hands of the rival Azusa Pacific Cougars. 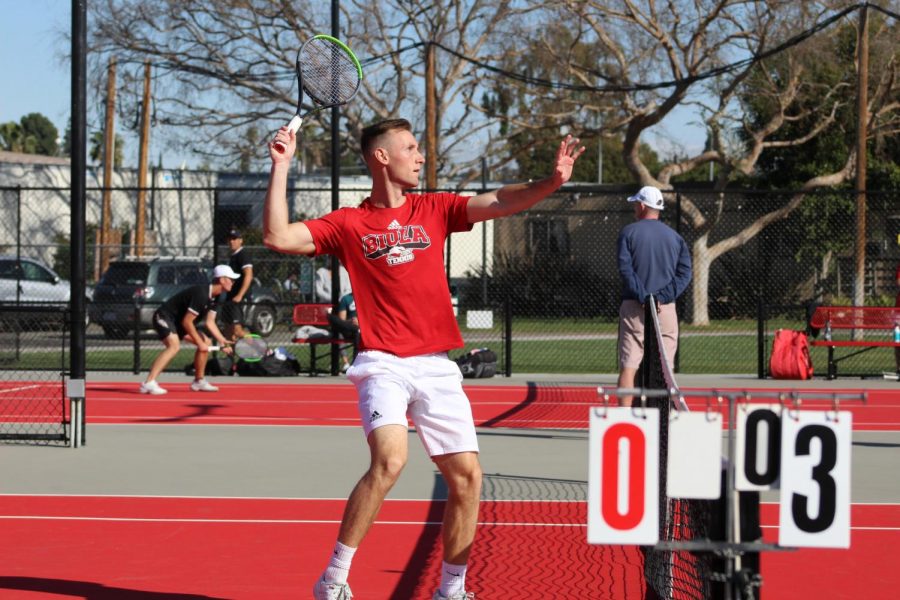 Senior Derek James gets ready to hit the ball from his opponents.

Biola tennis hosted Azusa Pacific University on Monday afternoon in a men’s and women’s doubleheader. The men kept it close against a strong APU team, but ultimately fell just one point shy of Azusa, 3-4. Women’s tennis struggled in both their doubles and singles, getting swept 0-7.
EXPERIENCED COUGARS
The PacWest No. 7 Cougars won two of the three men’s double matches and three of the six singles played out. Senior Edwyn Ramos and sophomore Alexei Prokopchuk pulled out the only doubles win for the Eagles, defeating APU 6-3. Senior Derek James won the No. 3 singles match after two tight sets, sending the game to a third set where James dominated the final match, winning 6-0. Sophomore Andres Meneses and junior Quentin Lau both won their singles matches, but it wasn’t enough to give BU the overall edge over APU.

The women took on the No. 14 Azusa team, who proved their ranking. Biola was taken out by Azusa in the doubles and singles in a clean 0-7 defeat. Senior Lauren Lee, sophomore Ines Diaz, senior Allison Torres and sophomore Anna Hartmann all lost in their doubles matches after a single round. Freshmen Colbeyshae Emery and Brooke Fager kept APU on their toes in the first set of their doubles match, but the game went unfinished when there was no chance for an Eagles comeback.

Eagles tennis will take to Concordia University Irvine on Thursday, Feb. 13, the women’s matches TBA and the men at 2 p.m.