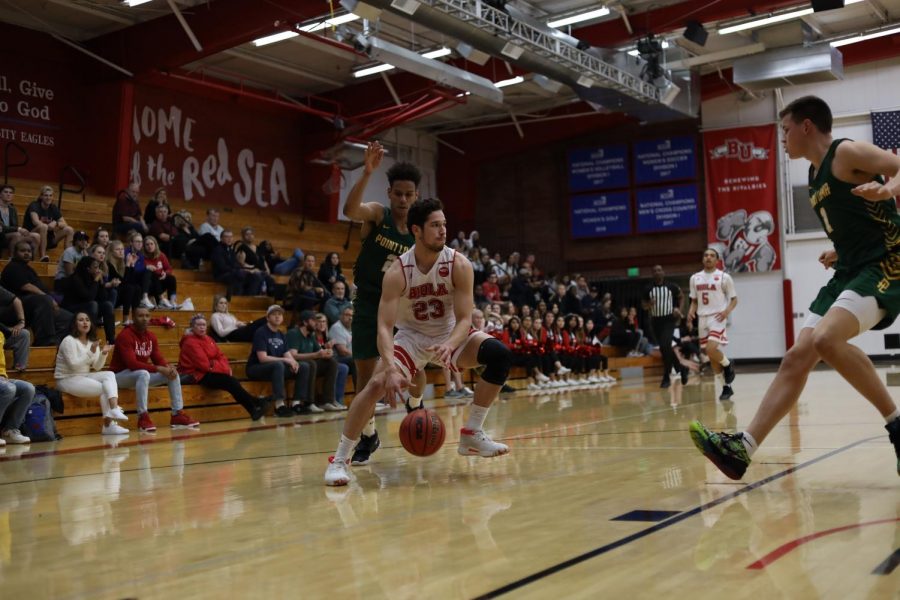 Sophomore guard Whitten Dominguez dribbles the ball around his opponents.

Men’s basketball won their second game on a two-game road trip to Northern California against Academy of Art University. The Eagles were led by junior forward Michael Bagatourian, who had 20 points and four rebounds, and junior guard Chris Rossow, who scored 18 points on 7-8 shooting.
LIGHTS OUT
BU shot the ball extremely well against the Urban Knights, knocking down just under 60% of their field goals along with 56% of their threes. They were even on fire from the free-throw line, making 92% of their attempts. The Eagles’ offense was also boosted by their stellar defense. They caused 13 turnovers from the Urban Knights and were able to add 15 points off of them.

Academy of Art was unable to get their offense going, due to poor shooting. They shot just 40% from the field and were lackluster from deep, converting only 26% of their threes. However, they were dominant in the paint, outscoring BU by 12 in that department.

All five of Biola’s starters ended the game with double-digit scoring. Sophomore guard Alex Wright had 14 points on 4-7 shooting from behind the arc while senior guard Marquise Mosley and junior forward Jesse Elrod also had 14 points each.