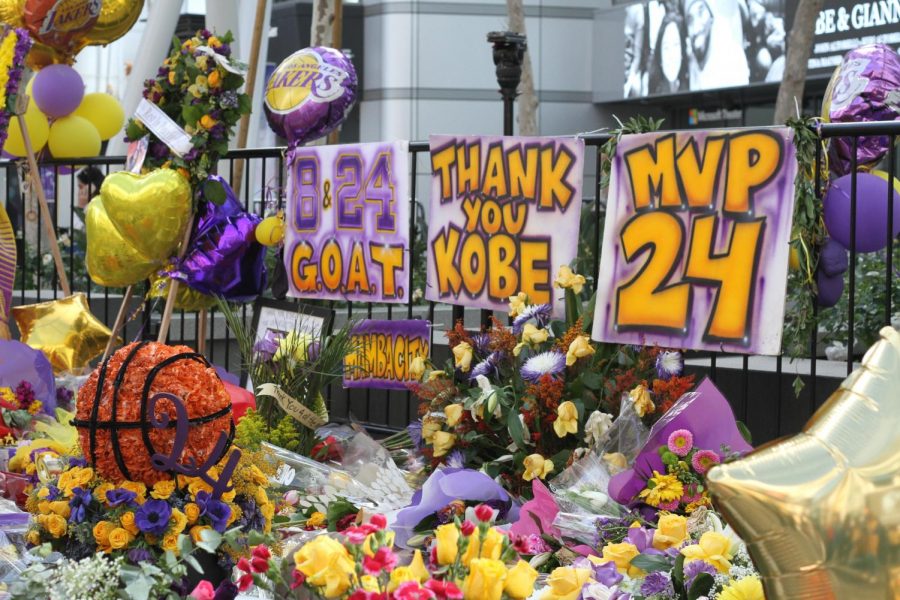 Thousands celebrated Bryant's legacy at the LA Live area, where the streets were flooded with flowers and balloons in Lakers purple and gold.

Even if you aren’t a basketball fan, odds are you have heard the name Kobe Bryant. It’s likely you’ve witnessed someone in class, at work, in a DMV waiting room jab, square up and shoot a fadeaway crumpled up piece of paper into a trash can while yelling, “KOBE!” The phenomenon that was Kobe Bryant didn’t happen overnight. He earned the honor of being the name behind every on and off-court jump shot during his 20 years of blood, sweat and tears with the Los Angeles Lakers. His achievements, loyalty and “Mamba Mentality” won the hearts of fans around the world—and no one was prepared for his sudden death.
#GIRLDAD
Most knew Kobe as an NBA superstar, not a father. Whether he was your favorite player or your most feared, played for your team or against it, Kobe will go down in history as one of the greatest to ever play, a basketball hall of famer. He transcended the game through his tireless dedication and determination—he was unmatched. On and off the court, the man was highly influential and admired by young hopefuls who believed they could achieve anything, just like Kobe. After his retirement in 2016, people started to see Kobe as a father figure, not just a basketball icon. He took the heart and soul he put on the court every night—his “Mamba Mentality”—and transferred it into being the greatest dad he could be for his girls.

The NBA superstar started his career by jumping fresh out of high school straight into the big leagues. He was only 17 at the time, so his parents had to co-sign his first contract with the Lakers. He was a rare breed, considering that no one had ever been drafted into the NBA that young before. A little cocky and with a slight chip on his shoulder, Kobe explored hobbies other than basketball—as most teenagers do. He had a few years of professional basketball under his belt when he decided to pursue a rap career on the side in 1999. Kobe was on set for his two-day music video shoot when he met his wife, Vanessa, who was a backup dancer for the video. The couple hit it off instantly and were hitched just two years later in April 2001.

While his music career eventually died off, his basketball career continued to skyrocket. Kobe led the Lakers to three-straight NBA titles from 2000–2002. He matured from his rookie era and began to think of life in a bigger context. Kobe and Vanessa started their family when their first daughter, Natalia, was born in 2003. They went on to have three more beautiful children in the years passing: Gianna “Gigi” (2006), Bianka (2016) and Capri (2019). Even with a chaotic traveling schedule as a pro athlete, Kobe never forgot the importance of being a family man, a “girl dad.”

In an on-air segment dedicated to remembering Bryant’s life, SportsCenter broadcaster Elle Duncan recalled a conversation she had with the father of four.

“I asked if he wanted more children, and he said that his wife, Vanessa, really wanted to try again for a boy but was sort of jokingly concerned that it would be another girl. And without hesitation, he said, ‘Girls are the best. I would have five more girls if I could. I’m a ‘girl dad.'”

For Kobe’s own children, their athletic abilities began to show as they grew older. Natalia is a star volleyball player, and Gigi, a gifted athlete who was ready to carry on the Bryant basketball legacy. She asked her five-time NBA champion father to teach her the craft. They shared the same immense love for the game, both having that special Bryant sparkle in their eye.

“That middle one, [Kobe said], that middle one was a monster,” Duncan said. “She’s a beast. She’s better than I was at her age. She’s got it.”

Kobe coached his Mamba girls in a way that taught the girls that the “Mamba Mentality” is not only for men but women too.

The father-daughter pair had been putting in the work to fulfill Gigi’s dreams to play for the notorious University of Connecticut women’s team, and eventually make her way into the WNBA—but she was taken too soon to live out her father’s legacy.
BIOLA SPEAKS

“He really inspired me to be better in the way I worked. Who he was, who he stood for especially in his post-career, it was just amazing. When I heard the news I was in shock, it sent ripples throughout the school, through me. It makes you see how [valuable] life is. Made me want to put my head down and grind out even more. I don’t know how long my body and my soul is gonna last so I’m going to make the most of it while I still can and do it for him.”

“We watched his final game and his speech and it was then that I broke down. I haven’t cried like that in a while, but it all hit me that he was gone. Now seeing all the memorials, I realized a legend doesn’t die. His life has sent waves into the future.”

“The media has done well so far focusing on him being a father. He was a really stand-up dude. Obviously his work ethic, what he stood for, what he cared about. Definitely the type of guy that didn’t hesitate to being the underdog in that role and using hard work to boost his career and his family’s lives.”

“He was definitely more than just a basketball player. He took that mentality and put it to every single thing, into being a father figure, coaching younger athletes and encouraging other people.”

“He was an icon living out of LA, which was so close to home. I remember just so many different moments watching him in the joy and the magic he was able to bring on the court… In everyday life, I’d shoot something into the trash can and say ‘KOBE!’ just ‘cause that was the name, man. The biggest thing I think people can take away from Kobe is to persevere through everything you go through but also that there is no substitute for hard work.”

“It is just tragic. Not just for Kobe but all nine people, a couple kids, the whole thing was sad. It is just a reminder that we are not in control in life and we have to be thankful for every day we have.”