The Eagles came up short in a four-point loss to Holy Names University. 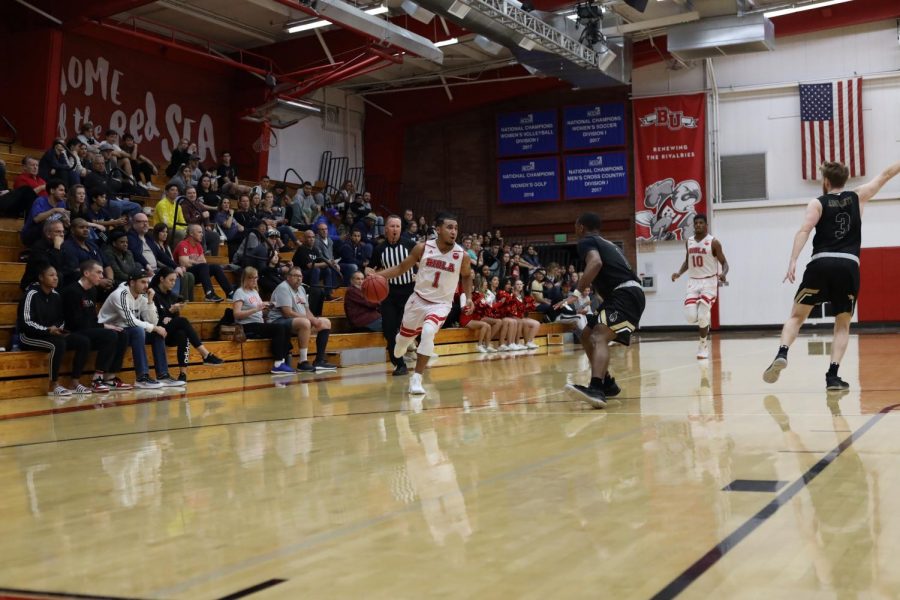 Men’s basketball traveled north to Oakland, California on Thursday evening to take on Holy Names University in a tight PacWest matchup. Junior guard Michael Bagatourian led the way for the Eagles, tallying 24 points, six rebounds and three assists. Bagatourian was perfect from behind the free-throw line, shooting 9-9 on the night. His offensive efforts were supported by senior guard Marquise Mosley and junior guard Chris Rossow, who both scored 13 points apiece. However the Eagles fell just short of topping the Hawks, who defeated BU 76-72.
DYSFUNCTIONAL TIMES
It was a back-and-forth battle between the Eagles and the Hawks all night. Seven lead changes between both halves prompted a toss up for who would walk away with the victory. Even with the chaotic conditions of the rough game, Biola was only down 36-38 at the half. The last 20 minutes were just as tight as the first. What gave Holy Names the edge to their victory was their defense. The Hawks held BU to just 26 total rebounds, a season low. Without getting second chance boards, the Eagles found themselves in yet another scoring conundrum.

However, Biola was excellent from the foul line, collecting 21-22 free throws. BU’s starters were able to keep the team within striking distance with a couple of defensive stops, but problems arose for the Eagles as the Hawks’ deep bench began rotating into the game. Holy Names scored 26 bench points versus the Eagles’ seven total bench points. The dagger for BU came when struggles from behind the arc surfaced, shooting only 12% from three-point range in the first half and 2-12 shooting from deep in the second.

The Eagles (12-10 overall, 8-8 PacWest) will continue their NorCal roadtrip with a matchup against the Academy of Art on Saturday, Feb. 8 at 3:30 p.m.