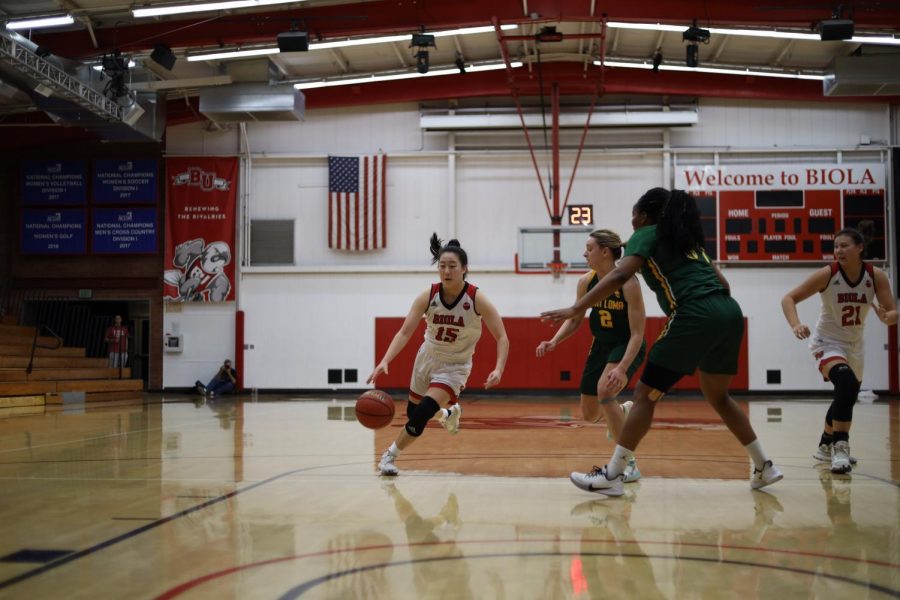 On Thursday evening, Feb. 6, women’s basketball traveled up the I-5 to play against the Holy Names University Hawks in Oakland, California. The Eagles came into the game searching to regain their momentum as they had won three straight games before dropping their last matchup at home. Biola easily defeated Holy Names, 84-51.
THE LEADING EAGLES
Holy Names found their only lead of the night after a free throw at the start of the game. The Eagles quickly gained control and went on a 14-0 run. Throughout the four quarters, BU remained on top and in control playing a solid and consistent game. It was truly a team effort as many of the girls put up impressive numbers. Freshman guard Stephanie Lee led the way with 16 points and went 6-7 from the field, securing seven rebounds and three assists to her statline as well. Freshman forward Madi Chang and senior guard Tatum Brimley finished with 15 points apiece, while junior forward Jazz Benn contributed 11 points with six rebounds and five assists.
EXPLOSIVE OFFENSE, SOARING DEFENSE
Biola’s offense was strong in their victory over Holy Names. They made 32 of their 62 shots, equating to a 51.6%. from the field. They were efficient and did not waste offensive opportunities. From beyond the arc, they shot a respectable 40%, making 10 of their 25 total shots. The Eagles’ offense soared in the second and fourth quarters, shooting an astounding 56% in the second and 68% in the fourth.

Biola did a magnificent job on defense as well. They held Holy Names to shooting 30.2% from the field and 33.3% from three-point range. The Eagles did a great job of limiting quality shots, which forced many errant shots from the Hawks.

Biola (overall 15-7, PacWest 11-5) will remain in the Bay Area as they look to carry their momentum into their next matchup against the Academy of Art (7-12) in San Francisco on Saturday, Feb. 8 at 1 p.m.