Students can give meal swipes to students struggling with food insecurity during donation week. 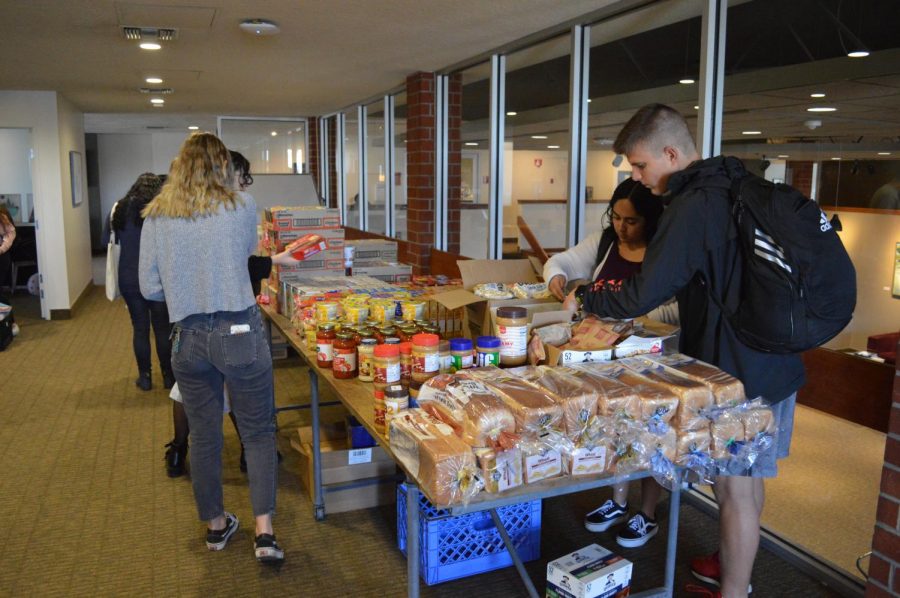 Students stop by the Pop-Up Pantry located in the Student Union Building every Tuesday in order to pick up groceries.

According to a 2019 national survey by the Hope Center for College, Community and Justice, 41% of students at four-year institutions experience food insecurity. At Biola, 68% of students experience food insecurity, according to a survey conducted by Biola Shares in 2019. After seeing this need, the new Biola Shares committee under Student Enrichment and Intercultural Development researched ways to combat food insecurity, which led to the creation of meal-swipe campaigns like Biola Shares Donation Week and resources like the Pop-Up Pantry.
FOOD INSECURITY
Food insecurity is a common problem on college campuses. Biola Shares defines it as “a spectrum of experiences where a student lacks consistent access to enough healthy and nutritious food,” but it can manifest in different ways.

“A student who is living on campus might choose the 10-meal plan,” explained sophomore communication studies major and Horton Hall senator Keren Godwin, who is involved with the Biola Shares program, “but then for the rest of the meals not eat because they need money for books, or they need money for gas, stuff like that.”

Junior public relations major and Biola Shares coordinator Marie Sonson said food insecurity can also be caused by a lack of time or other resources, and it affects a variety of people.

“It doesn’t look like what you think it will look like because there are some people that are on the extremes,” she explained. “Some are graduate students, some are undergraduate, and there are single moms or new moms applying for low-income housing… There’s other students though [whose] families have money, so the only thing is either the families will say, ‘You’re completely on your own now, you’re 18, you’re independent, pay for your school,’ or some parents don’t want to pay for their school because they don’t believe in what they’re studying.”
BIOLA SHARES DONATION WEEK
Biola Shares Donation Week is one of the ways to address this problem.

“We kind of have two goals. One is to reduce waste, but the main goal obviously is to help students thrive,” Sonson said. “It’s just really hard to get across, because people don’t understand the things that other students go through.”

Tables outside the Biola Health Center and inside the cafeteria are set up to accept meal swipes, student flex dollars and faculty and staff points from 11 a.m. to 1:30 p.m. every day until Friday and during Student Government Association Hour on Sunday. Donations can also be made through email or on the Give to Biola website. Last year, all donated meals were used.

“It’s hard to get across the message of food insecurity, especially because it looks like so many different things,” Sonson said. “The most touching thing is to see [students’] faces when they realize we’re just giving them meals. They’re so grateful for the students who have donated.”
POP-UP FOOD PANTRY
Another way Biola Shares combats food insecurity is through the Pop-Up Pantry, held every Tuesday from 10 a.m. to 2 p.m.

“It’s a really fulfilling thing to see the amount of kids that come in here,” said freshman engineering physics major and Pop-Up Pantry coordinator Logan Kuhn. “It doesn’t put a lot of pressure on people or stress like, ‘Should I be taking or should I not be taking?’ People can just come in and take whatever food they need.”

Donations come from two local churches, and staffers shop for whatever food items they are missing each week. All students have to do is come in and scan their ID card before shopping for what they need.

“We get all years, freshman to senior, we get some grad students and faculty members sometimes that come through,” Kuhn said. “I don’t know their personal situations and that’s kind of what we hope to do. We don’t want it to be like, ‘You have to meet this certain standard to be able to use the food pantry.’ Anybody can come in and grab food.”

While the pop-up pantry has helped a lot, Biola Shares is making plans for a permanent food pantry. Godwin says the focus now is on gathering student feedback and determining the best location for it, but so far the response has been very positive.