The Eagles came down to the wire during singles but lost 2-4. 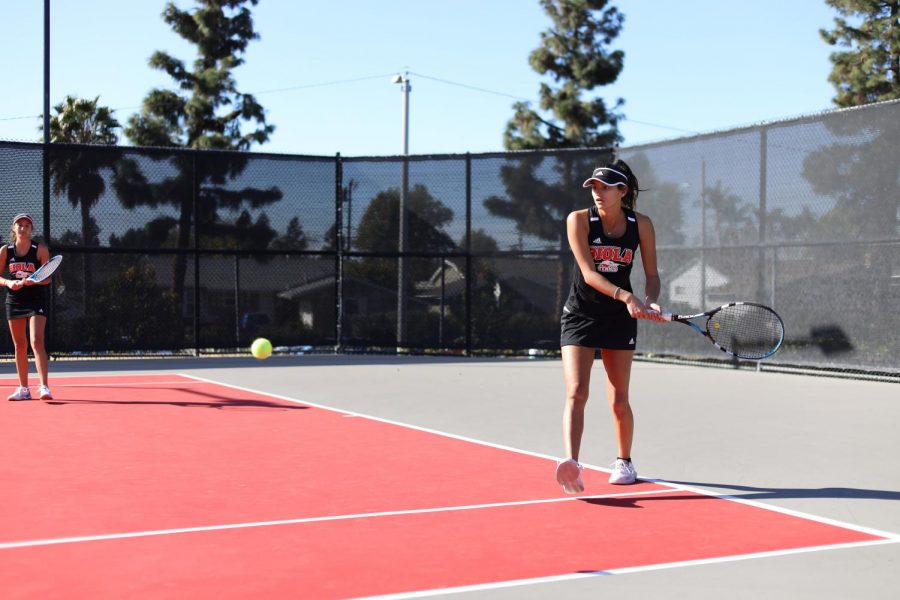 Senior Allison Torres goes in to hit the ball.

The Eagles opened their season this afternoon at the Biola Tennis Center, facing the Westmont College Warriors. Biola was predicted to have a great match today, with their early lead in the doubles. The Eagles fought hard but unfortunately lost in the singles, resulting in the 2-4 defeat.

“We wanted to go out there confident and strong,” said assistant coach Madeline Heer. “We had prepared for this tough match. We knew that it could’ve gone either way and it really came down to the wire today. I think the girls were very ready to fight in every match and I think they did. It just came down to one match, but we came in fighting.”
EVERY POINT MATTERS
Going into the doubles were sophomore Ines Diaz and senior Allison Torres, who won their match 6-1 over the Warriors. Following on court was double team sophomore Anna Hartmann and senior Lauren Lee, with a close match of 7-5 to secure an early lead in the doubles for Biola.

With Biola’s early 2-0 lead, they had confidence and excitement going into singles. Yet, the Warriors were looking for redemption to regain control in this clinch singles match up. Torres provided her team with their first singles win, sweeping both her sets 6-0 and 6-1. However, the rest of the Eagles went to battle out every last point to try and win it for Biola. Diaz won her first set 6-2, yet lost set two 4-6 and set three 2-6. Lee lost in a two-set singles match, scoring 2-6 and 1-6. Similarly, in another two-set loss, junior Madison Swaney came short with scores of 1-6 and 4-6.
DOWN TO THE LAST MATCH
The Eagles had only won one of the four single matches to this point, but they still had a window to pull out a victory. Freshman Brooke Fager had a strong performance in the singles going, 6-4 in the first set and losing 3-6 in the second, yet regaining control of the court in her third by going 4-2. Whilst Fager was competing in her fourth set, Emery lost her set 1-6 but then came back with an impressive 6-2 victory in the second. Unfortunately, Westmont called the match after freshman Emery put up an impressive fight in the third set. Losing 5-7 this declared Fager’s  match unfinished overall, resulting in Biola’s loss of 2-4.

“Fight, work hard and stay positive,” Fager said. “Just staying positive and fighting was keeping my energy up. Especially fighting for every point, focusing on every single shot and every single point.”

The Eagles (1-1) will take on Lewis and Clark College at the Biola Tennis Center Friday, Feb. 7 at 4 p.m.