The Eagles swept the Warriors to maintain their perfect record. 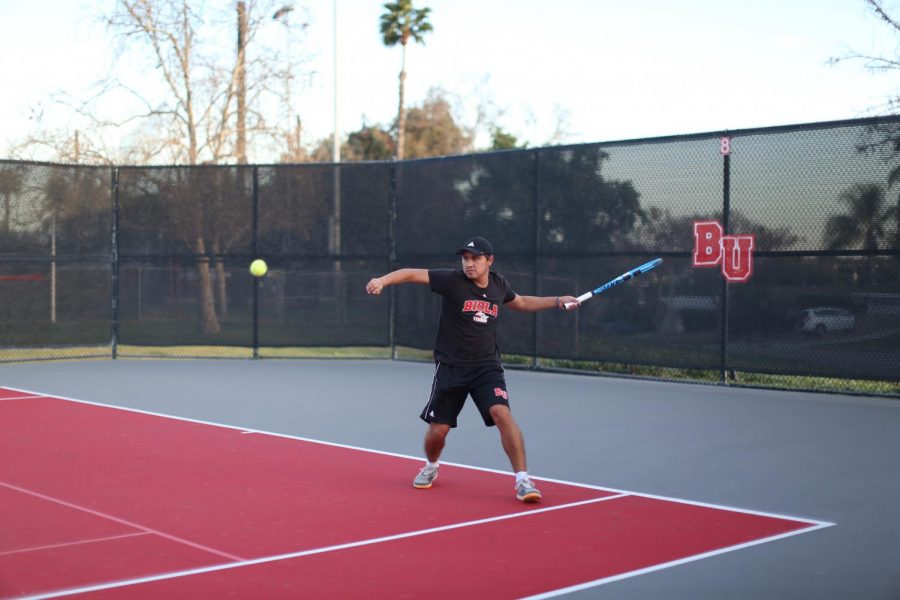 Andres Meneses, a sophomore business major, prepares to swing at the ball.

Men’s tennis dominated Westmont University in their match on Tuesday afternoon. The Eagles won all six of their singles matches and secured the doubles point, resulting in a 7-0 sweep.

Seniors Alexei Prokopchuk and Derek James highlighted the night, both only allowing their opponents to win one game. Additionally, junior Logan Blair battled for his singles point, winning back-to-back games in dramatic 6-4 fashion.
COMPLETE CONTROL
The day started off with a clean sweep of the doubles matches. Senior Edwyn Ramos and junior Quentin Lau won the first match, 6-1, while Blair and sophomore Andres Meneses guaranteed the point for the Eagles in their win, 6-2. The team’s aggressive approach to their matches showed how well they had prepared in the preseason.

“We’ve worked really hard this year leading up to the season and I think they are just chomping at the bit to compete and play and win,” said head coach David Goodman. “I think this [was] a good match for us to prepare ourselves for the [PacWest] conference and for [University of California,] San Diego, which is a big match for us this weekend.”

The domination continued into the singles matches, where the Eagles won every single match. Lau’s match was the only one to go past two games, winning in his third set, 10-7.
EYES ON THE PRIZE
Despite the big wins in both their matches so far, the Eagles are not getting ahead of themselves.

“It’s a good warmup match going into UC San Diego on Saturday, which is a really big regional match for us, and just excited to finish and be ready for them and [Azusa Pacific University] on Tuesday,” Blair said. “Practice has been really good. We have been putting in the time on the court and in the gym, and I’m hoping it pays off.”

The Eagles (2-0) will be back on the court this Saturday, Feb. 8 to face the University of California, San Diego at the Biola Tennis Center.