The Eagles battled against Azusa Pacific University in their second grueling matchup of the season. 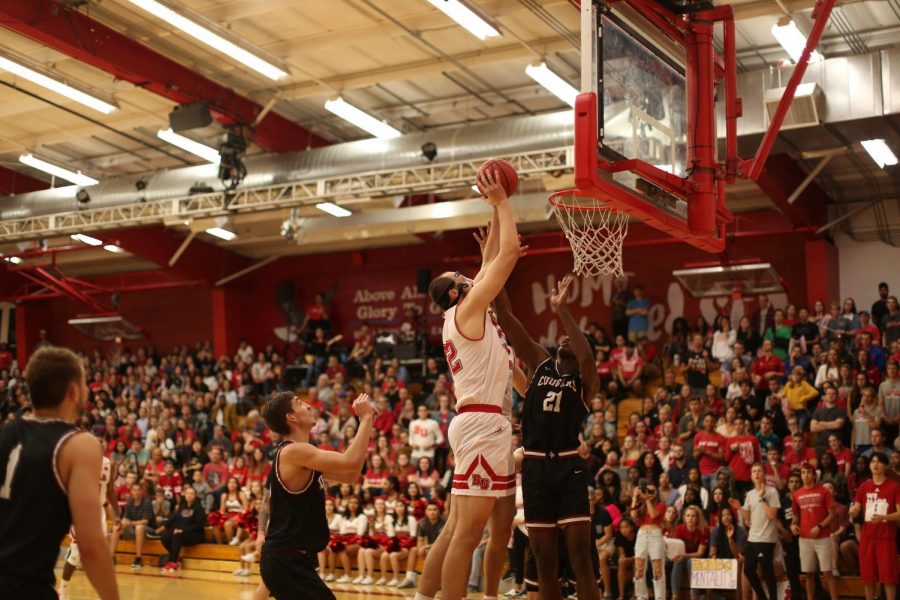 Solomon Ruddell, a sophomore undecided major with a forward position, makes a basket.

Men’s basketball couldn’t quite pull out a victory against Azusa Pacific University on Feb. 1, losing by only an 11-point margin. The crowd was engaged all night, chanting “I believe that we will win!” on multiple occasions. Despite the energy from the stands, the game ended 90-79.

The Eagles were led by junior forward Michael Bagatourian, who had 22 points and 12 rebounds, while junior guard Chris Rossow also had a big scoring night with 20. In the second half, senior guard Marquise Mosley, who had 14 points and three assists, came up with multiple big plays to keep BU in the contest.
DEFENSE WINS GAMES
The Eagles fell short defensively, allowing the Cougars to shoot 50% on their field goals and a staggering 43% from downtown. On the other hand, APU was able to hold BU to only 25% from deep, with no 3-point attempts made in the second half.

“I think we had some lapses. We played pretty hard, with intensity, but throughout the game [we] just had mental lapses that they capitalized on,” Mosley said. “Also, containing the 3-point line, which we struggled with, they hit a lot of threes.”

On top of the defensive issues, the Eagles’ bench was outscored by a 12-point margin. APU’s junior guard Terrence Becvar had 13 points off the bench, while BU’s bench only mustered nine points combined.
FIGHTING MENTALITY
Throughout the second half, the Eagles showed their fight, even cutting the lead down to four points with only eight minutes left. However, with 1:39 left in the game, APU’s junior guard Rymer Brennan hit a 3-pointer from way behind the arc to seal the game. The Cougars went on to win 90-79 in the Cornerstone Cup.

“We did a lot of things well. We took care of the ball, we only had five turnovers. I think it was just a two rebound difference, and we got to the free-throw line 25 times,” said head coach Dave Holmquist. “We met some of our goals, but we just didn’t guard the 3-point line as well as we wanted to.”
CRAZY CROWD
The Biola student body was electric in the crowd throughout the game. The rivalry between the Eagles and the Cougars brought out the best in both teams and crowds.

“I think the crowd was great,” Mosley said. “They gave us energy throughout the game. I loved it, it was a great atmosphere tonight.”