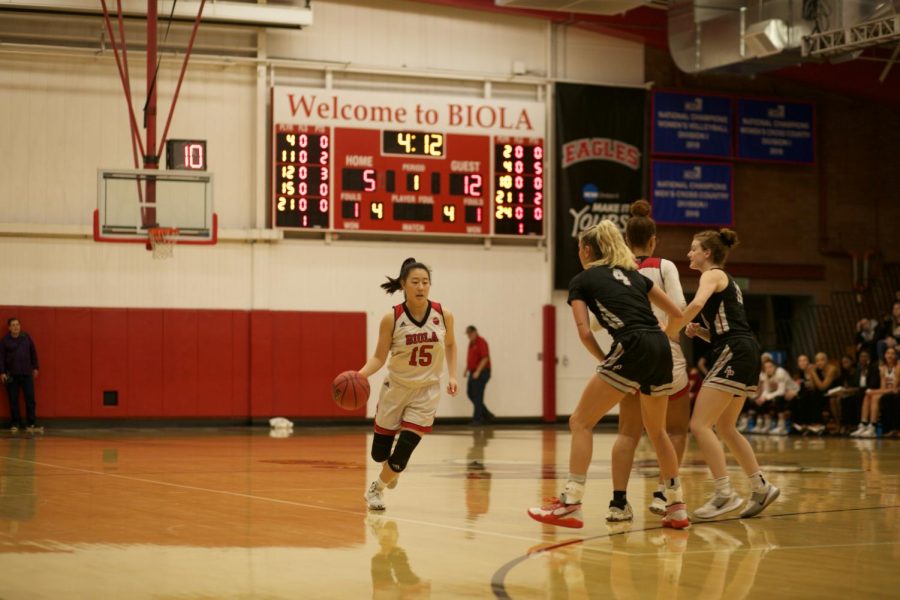 Stephanie Lee, a freshman nursing major with a guard position, dribbles the ball.

Biola women’s basketball, hot off a three-game win streak, took on Azusa Pacific University for the second time in PacWest conference play. After a loss earlier in the season, the Eagles looked to change the result a second time around. Although a close game, BU fell short in the end, 64-74.

Senior guard Jelissa Puckett led the team with 14 points, four rebounds and two steals. Sophomore guard Aysia Johnson and freshman forward Madi Chang followed close behind with 11 points each. Johnson also added four rebounds.
SLOW START
The Eagles started slow, with the Cougars in the lead 20-12 at the end of the first quarter. But Biola picked up the pace in the second quarter, scoring 18 points, led by Puckett’s seven, to APU’s 17. Both teams battled on the boards, however, APU’s eight offensive rebounds were too much for BU, who only had two. Chang also went 2-2 on 3-pointers. Puckett changed the atmosphere going into the second quarter, energizing her team.

“The energy is always great, it’s always good to play at Biola, to play at home. It’s always exciting. Unfortunately, we didn’t pull out the win,” Puckett said.

APU’s Savanna Hanson led her team’s momentum with four 3-pointers. But the Eagles followed close behind, 30-37, only down seven points at half time.
FALLING SHORT
The Cougars pounced on the Eagles in the second half, outscoring them by nine points in the third quarter.

“They wanted to play their best and pull this game out to represent Biola and because of all the support that we get,” said head coach Alan Nakamura. “They’re really disappointed that we didn’t play our best.”

Biola matched Azusa in the fourth quarter, adding three 3-pointers. The Eagles grabbed 14 points off of turnovers to APU’s 10 points and 20 fast break points. It was not enough, as APU finished the match up by 10, 74-64.

The Eagles (14-7 overall, 10-5 PacWest) will be back out on the court Thursday, Feb. 1 in Oakland, California to take on Holy Names University.