The Eagles’ nine-game home winning streak ends in a tough loss to PLNU, 50-71. 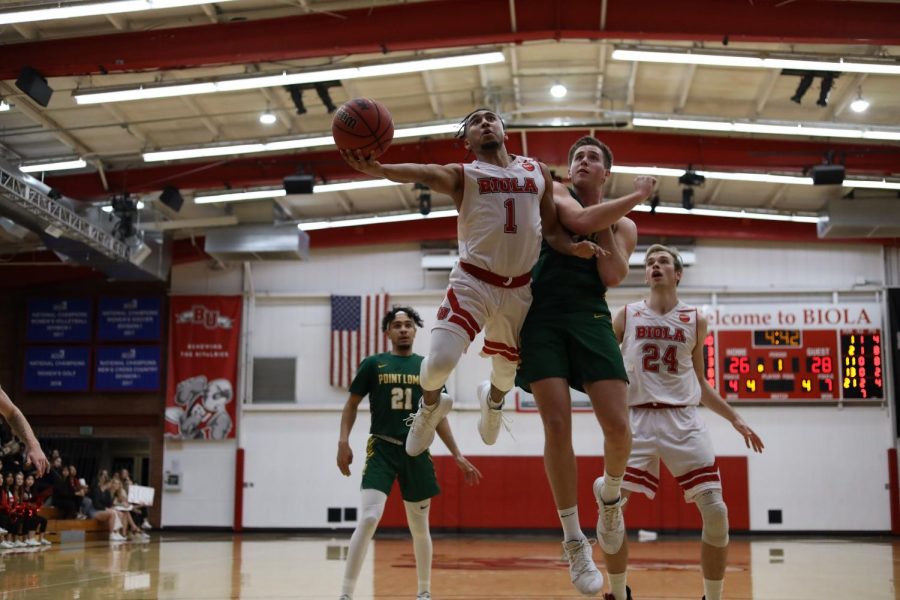 Men’s basketball hosted Point Loma Nazarene University for the second time on Wednesday evening. During their second matchup against PLNU this season, the Eagles looked to extend their nine-game home winning streak. Biola kept the game close for the first 10 minutes but let the game slip away and took the loss at 71-50.

Sophomore guard Alex Wright led the Eagles with a double-double, earning 12 points and 14 rebounds. Junior guard Michael Bagatourian followed closely with 14 points and 9 rebounds. Junior and senior guards Chris Rossow and Marquise Mosley both contributed on the offensive end, Rossow with 10 points and Mosley with eight of his own.
STOLEN MOMENTUM
The Eagles started the game with equal momentum to the Sea Lions, keeping the game close in the beginning minutes. Biola tied the game at 20-20, shedding some hope for a possible Eagles win. The Eagles began on a good foot, shooting 6-15 from behind the arc, while PLNU’s foul trouble begin early in the game with 7 fouls at the 15-minute mark. However, BU began to lose their momentum when the Sea Lions started sinking deadly shots. Biola tried to redeem themselves by picking up on defense, but left their supporters disappointed. The Eagles ended the half with messy offense and lax defense.

“We could have done better on defense for sure,” Wright said. “[We] should have stuck to our game plan and do what we had to do instead of doing what we did tonight.”
EAGLES STUNNED
PLNU came out of the locker room on fire and ready to compete, shooting 54.8% from the field in the first half. Into the second half, Biola fans hoped the Eagles would be able to close the 10-point deficit but they were stopped by PLNU’s steady defense and missed multiple chances to make progress across the floor. The Eagles looked to follow their solid 3-point shooting from the first half, but were unfortunately only able to make 1-14 shots in the second, shooting 7.14%, proving their downfall in the 50-71 loss.
POSTGAME REFLECTIONS
The Eagles’ 21-point loss came after only a three-point loss to the Sea Lions back in mid-December.

“We got punched in the mouth and never responded,” Bagatourian said.

Despite the tough loss, head coach Dave Holmquist was encouraged by the competition.

“PLNU was very good. They were much better than the first time we played them. Their defense bothered us considerably. We didn’t have an inside game at all, there were just a lot of things we got to go back and look at and try and improve,” Holmquist said. “I think we were ready to play but we didn’t execute very well on offense. They just outplayed us.”