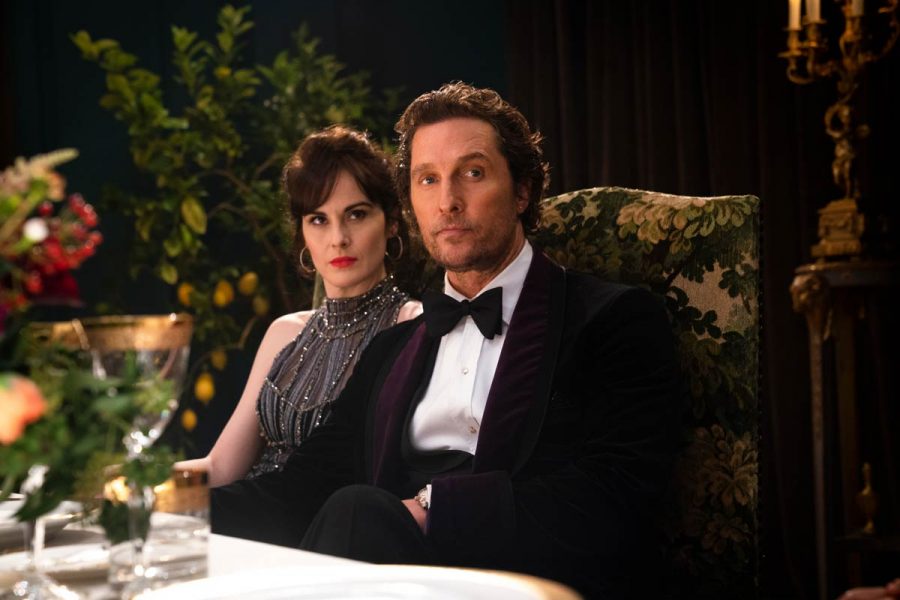 From live-action Disney remakes to historical crime dramas, Guy Ritchie has a wide variety of stories under his belt. He makes his 2020 film debut with “The Gentlemen,” a unique story that will either be a hit or a miss for audiences. Although it is packed with action, advanced humor and plenty of twists and turns, the plot of “The Gentlemen” may go over some viewers’ heads.
NICHE STORY
Ritchie  tries his hand at making a crime-action film into a comedy with “The Gentlemen,” for better or for worse. While some of his jokes are quite clever, not all are executed tastefully. Ritchie portrays a very specific style of crude humor that not all viewers will fully understand or appreciate, such as using sexual innuendos to describe film terms. Hugh Grant’s performance as private investigator Fletcher is stellar, yet a large portion of his character is based around the crude jokes he makes while explaining his investigative findings on an elaborate marijuana business.

The film as a whole follows the same route. The story revolves around a marijuana empire that Michael Pearson, portrayed by Matthew McConaughey, has built in London. Each character desires wealth and power, and Ritchie uses metaphors such as lions, dragons and kings to convey this message. It is undoubtedly a very gritty film, containing violence, drugs and crude humor, with no uplifting messages. While Ritchie succeeds in visuals, the story will likely only be enjoyed by a niche audience.
NOD TO CINEMA
Film nerds will appreciate Ritchie’s nods to the industry in “The Gentlemen,” especially with its well-executed visuals. Fletcher enters the story with a typed-up screenplay, attempting to sell his findings to Michael’s associate, Ray. The entire film is built around Fletcher’s explanation of his findings on Michael in the form of a story pitch, from its portrayal as Michael the protagonist to minuscule details like its aspect ratio, using the wide screen to execute their outlandish scenes. “The Gentlemen” starts and ends with Fletcher pitching his screenplay to another person, even hinting at a potential sequel to Michael’s story.
OVERLY COMPLEX
Ritchie does not fail to impress with the bold twists and turns presented throughout the film, as “The Gentlemen” is packed with one surprise after another until the very end. These surprises, combined with shocking humor and unexpected events, will keep the audience on the edge of their seats throughout the film. Although the story is enough to make some viewers feel uncomfortable, it does not fall short in the entertainment category—Ritchie transformed a basic crime story into something much more complex.

That being said, Ritchie’s story is arguably too complex. Switching back and forth between past and present is enough to confuse some viewers, not to mention the additional layers of depth added at nearly every scene. Ritchie makes some connections  throughout the film, but it is not difficult to become lost somewhere in the story. Audiences may not realize what exactly is going on until the very end of the film. “The Gentlemen” will have audiences thinking and putting the pieces together the entire time.