To keep up with NCAA Division II regulations, Biola has broken ground to add two new wings to Chase Gymnasium. 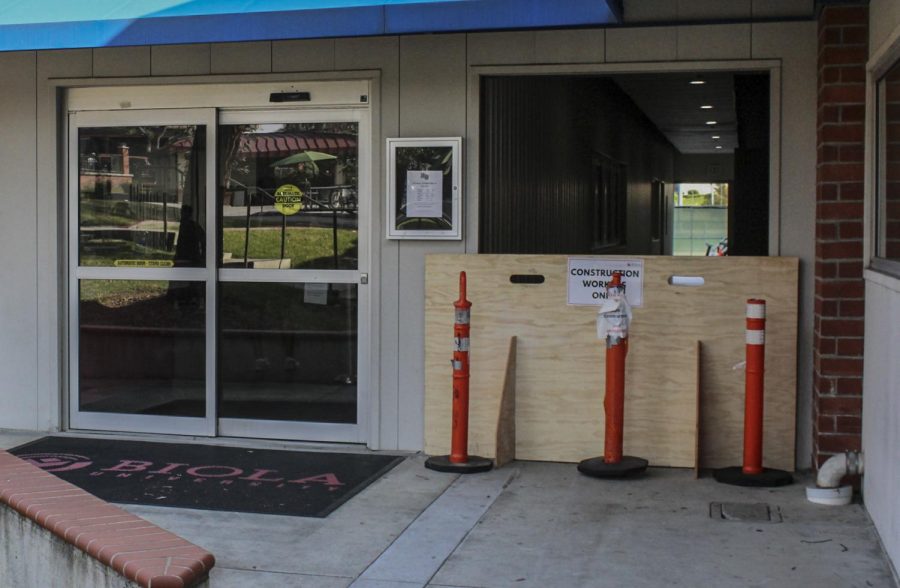 The fitness center construction is set for completion in mid-March.

With the start of a new semester comes a new and unusual look to Chase Gymnasium. Orange cones line the edges of torn-up dirt and concrete, showing signs of a new foundation for Biola Athletics. The versatile gym was built in 1966 and has received few renovations since then. Fifty-four years later on Jan. 2, the university started significant construction on the facility, adding two new wings to the gym. Due to the renovations, students have been forced to share the workout facility during the interim period, which has interrupted the daily training routines of both students and student-athletes.
NCAA STANDARDS
Biola’s officially transitioned into Division II effective Sept. 2019. To meet the standards established by the NCAA, Athletics must include a minimum space requirements for athletic facilities to accommodate student athletes. Associate Athletic Director for Internal Operations Eddie Shepard noted the renovations are in accordance with NCAA health and safety standards, particularly pertaining to the athletic training room. The regulation intends to ensure athletes will be properly served with adequate access to weight training, preventative medicine and locker room amenities.

“The NCAA transition kind of helped us to have the momentum to get this project going,” Shepard said. “But I would also say that we needed to do it one way or the other, regardless of [the regulations]. I think it would have been a longer process had we not transitioned to the NCAA but it was something that we had to do in the next couple years.”

The north wing spending has reached $2,066,000 while the south wing is budgeted to reach heights of $4 million, according to Associate Vice President of Facility and Auxiliary Operations Brian Phillips.
NOT SEEING EYE TO EYE
However, the new facilities come at a price. Renovations mean that both students and student athletes would have to share one small workout room until construction is finished. The weight room is currently divided up into segregated halves to best accommodate everyone, one side for students and the other strictly for athletes.

“They took away a lot of the yoga balls and the rowing machines and a lot of mats to do abs,” said sophomore public relations major Kate Roberts. “It’s so frustrating though. There could be one or two athletes in that station working out and even if there are, you’re not even allowed to go in the premises, you’ll be asked to step out to give them their space.”

Students are still in the process of learning to adapt and adjust to the temporary gym situation. Priority is given to Biola sports teams, who have set times in which they have total access to the entire weight room. Students, however, only have certain times in which they can have access into the facility.

“It makes it harder trying to contain a team of 40 guys while also allowing the open gym for students, but so far we have been able to work around it okay,” said Josh Ludman, senior pitcher for Eagles baseball. “It’s a lot easier to be flexible with what’s going on knowing that, in the long run, the gym, weight room and training room are going to be a lot better.”
STUDENT AMENITIES
Athletic facilities are not the only areas receiving a facelift. The university plans to renovate the student-utilized fitness center after the weight room is finished.

According to Shepard, students should expect access to a survey in the next couple of weeks, available at the front desk in the fitness center. Both athletes and students can hope to have a fresh and fully functioning workout facility in 90 days.