Biolans who worked on the project say the New-York based duo was open about their faith. 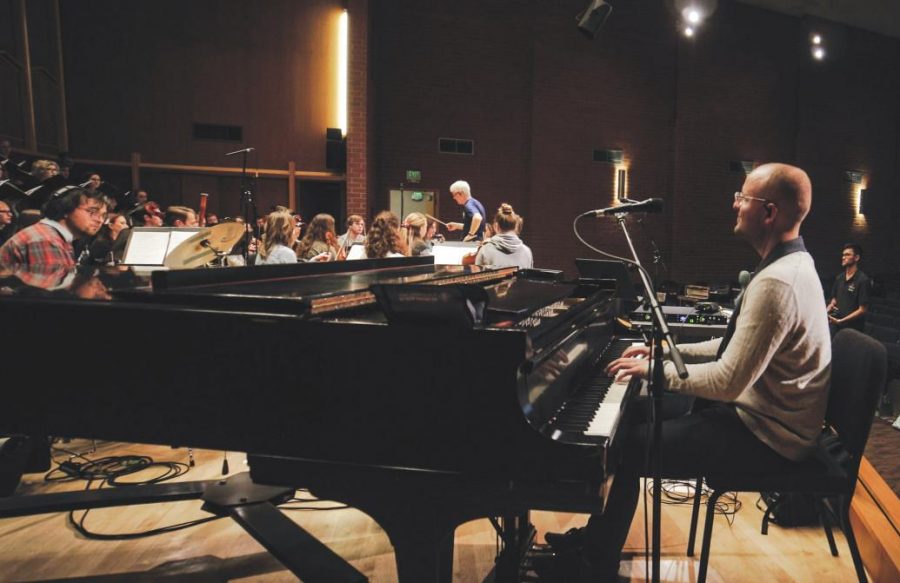 The Conservatory of Music’s orchestra and chorale worked on the project with The Brilliance.

Not many people can say they were featured on the album of a successful artist. Luckily, acoustic-rooted and pop-inspired duo The Brilliance sought out members of the Conservatory of Music’s orchestra and chorale to be featured in their newest album. Their recent album released on Jan. 10, “Suite No. 2: World Keeps Spinning,” features both solo and ensemble performances from students.
BLENDING MUSIC TYPES
The Brilliance is well-known for their neoclassical style, with dashes of pop and R&B sprinkled in. Incorporating the orchestra and chorale into their latest album adds some musical diversity to their record. Recorded last March, the orchestra is featured on tracks “Release Me” and “Holding On,” while the chorale is featured on “I Shall Not Fear.”

“It was a really collaborative process,” said Sarah Ritter, a senior music performance major and chorale member. “It actually relied more heavily on improvisation than I expected.”

According to Ritter, The Brilliance built some of their songs around the sounds of the orchestra and chorale. During their recording sessions, the band would change elements on the fly based on the students’ sound, resulting in an intriguing mixture of classical, pop and orchestral music styles that flow seamlessly together.
FAITH DEMONSTRATED
The Brilliance’s music undoubtedly showcases their Christian beliefs and values, as many of their songs serve as commentaries on faith and culture. According to the students who worked closely with band members David Gungor and John Arndt, The Brilliance not only speaks their message out in their music, but also lives it out in their interactions with others.

“They wanted to share the heart of the project,” said senior sociology major Hailee Wachowiak, who was featured in “I Shall Not Fear.” “In the songs that we specifically sang in, they would explain what they were feeling when they wrote the piece.”

Wachowiak emphasized that the band members were open about their faith and the purpose behind their music. While some of their tracks, such as “I Shall Not Fear,” seem darker than others on the album, they recognize the human nature that comes from a Creator. Even the songs that feel more secular, such as “Facebook” and “World Keeps Spinning,” are still rooted in faith, promoting messages about where hope comes from without explicitly mentioning Christ.
VALUABLE EXPERIENCES
Recording with the band was fast-paced and different than what most of the students were used to, having trained classically at the Conservatory. In addition to the resume boost, students say they appreciated the opportunity to be involved in a fun, collaborative atmosphere. In addition, Wachowiak was given a unique and valuable experience as the only student to sing a solo in their featured songs. Director of choral studies Shawna Stewart said this was an opportunity for the students to try something new with their music.

“Any time students get the opportunity to be involved in a live creative process outside of their traditional sphere of music-making, it is so valuable for them,” she said.