By denying the role of coal emissions in recent bush fires, Morrison neglects to prevent Australia from future disasters. 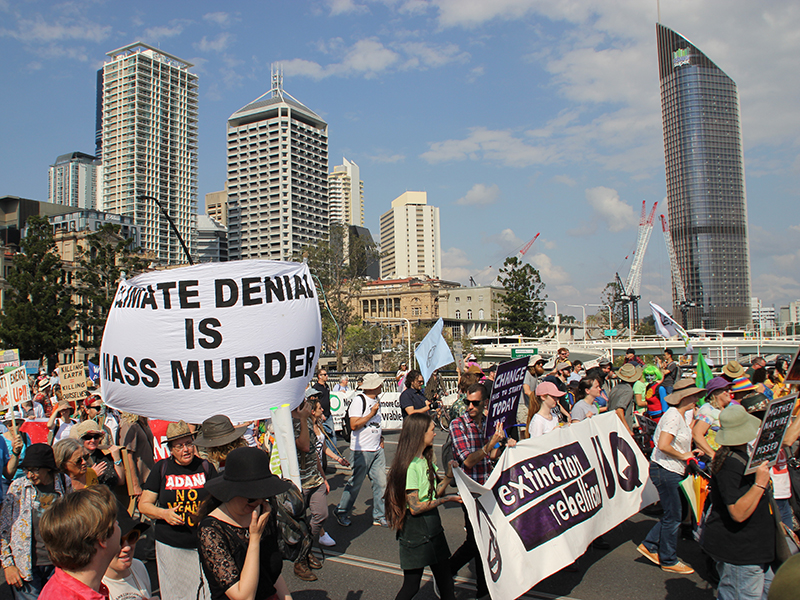 When I was 13 years old, the Rim Fire burned through forests in Tuolumne County—where I grew up. A few years after the fire, my dad and I drove through the burned area. I looked out the window at the trees that now looked like toothpicks stretched across mountainsides. We drove by the creek where my dad had first taken me fishing. It was unrecognizable. The ferns and cedar trees that lined its water pools were completely gone. While I stared at the blackened trunks of dead trees, my dad told me it broke his heart to see the country that he grew up exploring completely burned.

The Rim Fire in California burned 257,314 acres. The bushfires in Australia have already burned 14.5 million acres. Australia is facing devastation to their land on a scale I could never imagine.

The Great Barrier Reef faces decay, kelp forests are disappearing and rainforests are burning. According to TIME, hundreds of homes have burned and at least 24 people have died. The World Wildlife Fund reported that nearly 1.25 billion animals died as the fires push entire species closer to extinction. However, the Australian government has not responded to this heartbreaking devastation by defending their country and its ecosystem. Instead, they’ve defended their coal industries. Regardless of whether or not climate change is the cause of the intensity of the fires, the government’s choice to defend industries that stand for environmental degradation in the face of such a devastating loss shows passivity when it comes to caring for the land they were elected to govern and protect.

AUSTRALIAN GOVERNMENT’S INITIAL NEGLECT
Throughout his governance, Australian Prime Minister Scott Morrison repeatedly said that Australia has adequately curbed emissions, especially since the population of Australia is relatively small, the New York Times reported. However, Morrison’s platform for his election in 2018 was, in part, catering to the needs of coal miners and the mining industry.

Australia contributes massively to coal exports and has a diverse ecosystem with plants and species that are especially vulnerable to emissions. Under the Paris Climate Agreement, Australia was set to reduce climate emissions 26-38% by 2030 compared to their 2005 emissions. However, according to BBC News, the UN found there had been no improvements in climate policy or reduction in emissions since 2017. By neglecting to limit coal exports—which admittedly are valuable to the economy—Morrison’s passivity allowed emissions to fuel the bushfires. Had Morrison considered taking action against climate change, such as placing restrictions on industries that contribute to emissions, Australia could have avoided the severity of the recent bushfires.
GOVERNMENT RESPONSE DENIES ROLE OF EMISSIONS
Though the bushfires are the worst reported in Australian history, Morrison declined to consider major changes in policy regarding fossil fuels, coal and renewable energy, according to a recent interview with ABC News Australia. Instead, he promised “historic change” in how and when defense resources are deployed in the event of a natural disaster. Morrison proposes focusing on relief in fires, cyclones, floods and drought—prioritizing what he believes to be a practical response to disaster. However, this is not the historic change many Australians were hoping for.

Though Morrison argues that focusing on disaster relief is just as effective in fighting against climate change as reducing emissions, the Australian government can only respond to a disaster after it occurs. By limiting coal exports, the government would limit emissions—actively preventing damage before disaster strikes.

By neglecting to address the coal industry’s emission contribution in Australia, Morrison denies his role in allowing the bushfires to grow in severity. Rather than address his short fallings as a leader in protecting the Australian environment, Morrison proposed a solution that ignored the coal industry’s contribution to climate change altogether. His change in policy is not historic. It is only a desperate reaction to the devastation he knew he had the power to prevent.
ENVIRONMENT BEFORE ECONOMY
Morrison’s inability to address climate change marks a turning point in how governments should respond to disaster that can be prevented through environmental preservation. Morrison made the decision to put the economy before the environment, focusing on upholding the coal industry and providing resources for relief after fires, rather than limiting emissions that could prevent intense fires in the future.

However, governments around the world can learn from the damage this has caused to Australia.

Reflecting on the fires that impacted my home, I understand that the environment is home to the memories of the people who have lived and explored the land, the species and the plants. If it is within the government’s power to protect this, then they should do whatever they possibly can to prevent intense destruction. There is no amount of money that completely reverses the impact of the loss of firefighters, homes and animals. Morrison did not protect Australia. However, by reducing emissions and limiting the use of fossil fuels, governments everywhere have the capability to care for the environment they were elected to protect. Through climate action, leaders everywhere have the chance to protect their communities before heartbreaking disaster strikes.