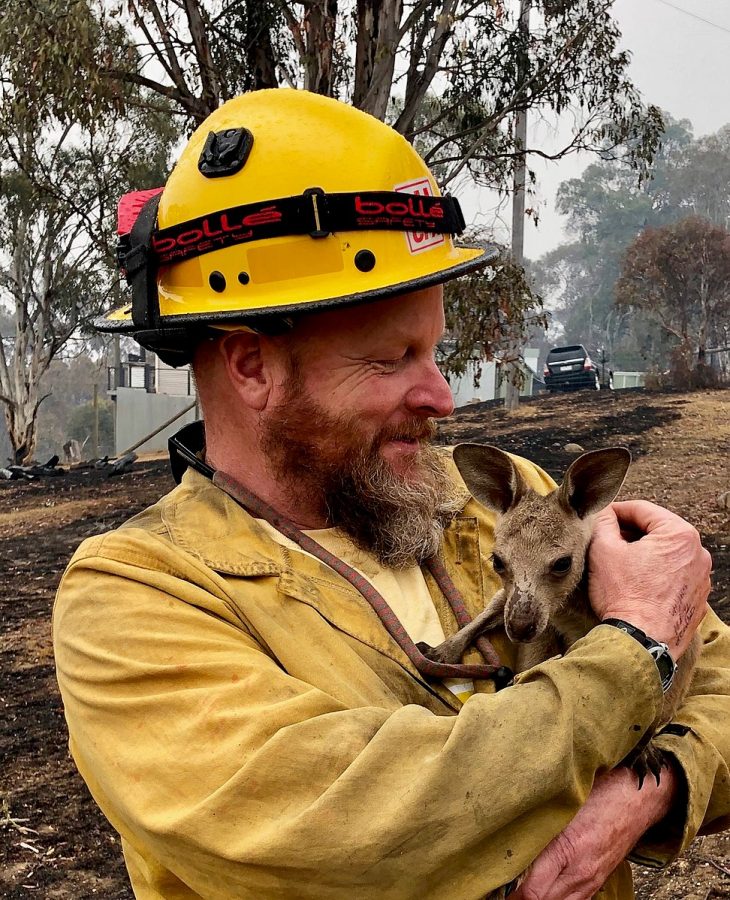 Koalas. Kangaroos. Wallabies. Five months of devastation and fear. The heart-wrenching images of these beautiful creatures attempting to escape certain death are plastered all over our Instagram pages and news feeds. These are only three of the many species that reside in Australia, which is currently threatened by grim bushfires that endanger this unique habitat. The New York Times reported that roughly one billion animals have been killed as a result of these fires, and while this large number is disputed, it illustrates the massive amount of devastation these fires are causing the nation.

Internationally, people have turned this horrible natural disaster into fuel for their argument toward climate change reform. Even presidential candidate Bernie Sanders’ economic advisor has referred to these fires as a “wake-up call” for policy reform, according to the Guardian. On the other hand, an LA Times editorial reports that the Trump administration has opposed steps that could help save the planet from climate change.

However, it is the voice of Australia’s Prime Minister, Scott Morrison that matters the most. According to ABC Australia, Morrison has agreed that the nation’s climate change stance has yet to work toward reform. However, he is not actively working to reduce emissions because of the threat it poses to the economy, as the coal industry provides jobs for many Australians. While some Australian citizens are discontented by their leaders’ lack of action when it comes to climate change, Morrison’s decision to put his nation above politics shows his rightful consideration of the economy in response to the Australian bushfires.

Read more “Australian government response shows passivity in response to climate change.”
PRIME MINISTER’S CAMPAIGN
Much of Morrison’s campaign was focused on economic prosperity for the nation, particularly coal and tourism for Australia. NPR reports that he “championed working-class economic stability” and was a voice for Australia’s silent majority, who are the working class in Australia—many of which are employed by the coal industry. Morrison was passionate about putting his people first.

Morrison promised to address the problems facing his nation. He acknowledges climate change but has decided to stand firm in his protection of his nation’s coal industry. According to the Minerals Council of Australia, the organization employed about 50,000 Australians in 2018, calling their coal mining “sophisticated and hi-tech.”
ECONOMY VERSUS ENVIRONMENT
Many environmental activists, such as the passionate Greta Thunberg, argue that Australia must end the construction of a giant coal mine planned for the northern part of the nation. Australian Resources Minister Matt Canavan fought back, claiming that many environmental activists aren’t truly concerned with emissions reductions, but rather desire the “radical massive changes to [Australia’s] economy and society.”

While environmentalists seem to be concerned with climate change, they have interrupted many ways people seek to prevent wildfires in the past. Known for its dry climate, Australia has completed “controlled burns” in some areas, which help the nation prevent major wildfire disasters. A controlled burn is when a small area is intentionally set on fire to burn dry brush and grass that could cause danger to forestry during dry and hot seasons. However, one of Australia’s environmentalist groups, the Greens, protested that the controlled fires would contribute to climate change and the practice is now frowned upon.
PRESERVING THE FUTURE
Because of Morrison’s lack of climate change action during these wretched fires, much of his support has burned out. Rather than focusing on the claim that climate change is the cause of these fires, he has chosen to preserve Australia’s economic future. Much of the nation’s economy derives from coal, iron and gold mining as well as natural gas. Australia is a significant exporter of these resources to the rest of the world. Morrison has chosen to focus on natural disaster relief to fight destruction as it happens, which is the best way to protect the wildlife without damaging the coal industry. The New York Times writes that Morrison has sent military-aided evacuations for those threatened by the fires.

Morrison and his administration are doing the right thing. Morrison plans to act on climate change, but he does not want to do it in a way that will threaten his nation’s economic stability. Instead of focusing on those who only see the world through climate change, Morrison plans to rationally fight disaster by providing practical relief and stabilizing the economy.

What many people do not realize is that Morrison is indeed leading his nation toward a more sustainable future. In an interview with Australia’s Today Show, he explained that he plans to “reduce carbon emissions per capita by half between now and 2030.” He shared that Australia is a leader with renewable resources for the world. Morrison goes on to explain that he does not want people to lose their jobs so he is choosing to beat “emission reduction targets” rather than shut down massive sources of employment for his citizens. There is much more at stake here than most people see. Morrison is defending his country’s economy while paving the way to a more sustainable Australia.