Men’s basketball bounces back against NDNU 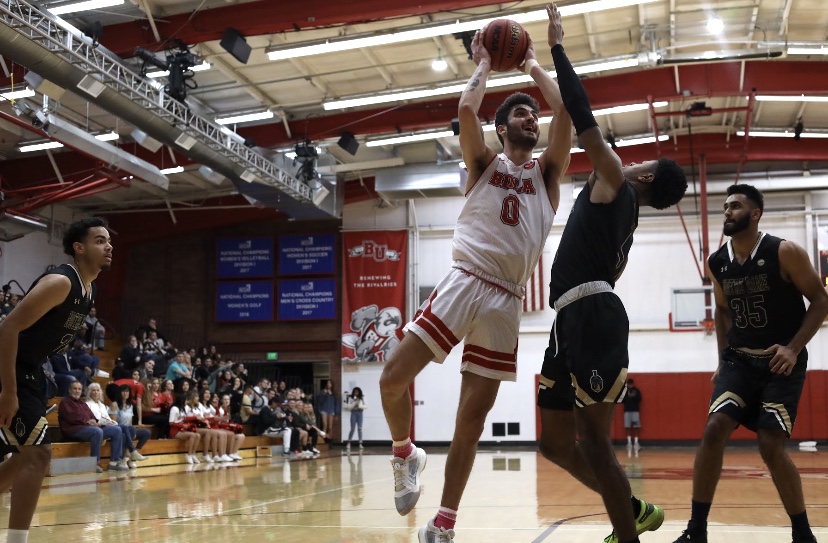 Men’s basketball welcomed Notre Dame De Namur University into Chase Gymnasium on Thursday evening seeking to extend their perfect winning streak at home (8-0). After back-to-back road losses to Concordia University Irvine and Azusa Pacific University, the Eagles came into the matchup with a positive mindset, which reflected on their performance. BU dominated on the defensive end and in turn found offensive gain from start to finish to pull away with the victory, 74-53.

Senior guard Marquise Mosley led all scorers with 20 points, shooting 9-14 from the field. Both junior guard Michael Bagatourian and sophomore guard Alex Wright earned double-doubles, Bagatourian with 16 points, 13 rebounds and three assists and Wright with 14 points, 12 rebounds and two assists.
MELLOW BEGINNING
Right from the tip, BU made a quick 9-3 push to maintain the lead during a progressive but slow start. NDNU tied the game on a couple of occasions but never mustered up enough buckets to pull away. It wasn’t until a 16-6 run by the Eagles that they got the gas they needed to create space between the Argonauts.

“Keeping our foot on the gas pedal and to just keep working on things to improve moving forward, that was our mindset,” Mosley said.

And the Eagles did just that. BU, putting a stop to the Argonauts’ attempt to gain control, collected enough consistent shots to put them up 36-28 at the half.
KICKING INTO GEAR
The Eagles came out explosive to start the second half. A monster slam dunk by Bagatourian sent the crowd to their feet, lifting the energy in Chase Gymnasium. A Wright steal and finishing layup forced NDNU to call a time out after a 12-3 run by the Eagles. Shots continued to fall for BU, and the runaway victory inched closer as bench players freshman guard Zanen Zeller and junior guard Tyus Dennis got some play time in the remaining minutes, where they each put their names in the stat book with two points each.

“We came together as a group-unity was good for us,” Mosley said. “We had some tough losses but we regrouped and I liked our attitude coming into the game.”

Biola put in the work on both ends of the floor. They outscored NDNU 36-12 from points in the paint and grabbed 21 more rebounds than the Argonauts, 47-26. The valiant bounce-back effort earned them their eighth straight win at Chase Gymnasium, 74-53.

“It was a good game for us,” said head coach Dave Holmquist. “We came back after those two losses on the road last week. We were just happy to get this one and did some good things tonight, hopefully we can do that again on Saturday.”

The Eagles (11-7 overall, 7-5 PacWest) will return to play at Chase Gymnasium on Saturday Jan. 25 at 4 p.m. to take on the Dominican University of California Penguins.