Catch a triple threat performance in “The Music Man” 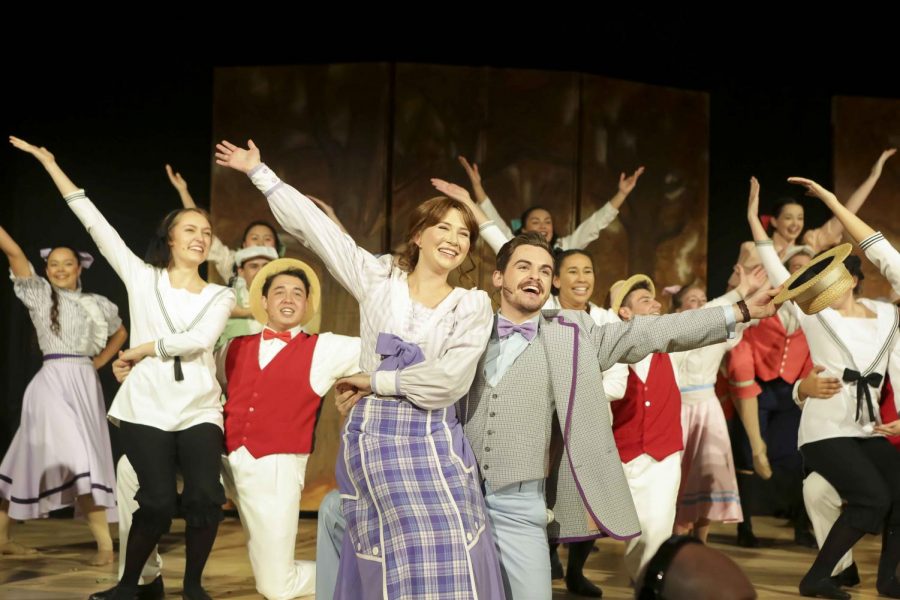 Professor Harold Hill, who hails from Gary, Indiana, sweeps the townspeople of River City, Iowa, off their feet when he encourages them to pursue music.

While most people associate the term “triple threat” with proficiency in acting, dancing and singing, this semester, Biolans can look to a different kind of triple threat in the latest production of American classic “The Music Man.” Although the cast dominates in song, dance and acting onstage, the behind-the-scenes preparation from Biola Youth Theatre, Theatre 21 and the Conservatory of Music presented a triple threat-like collaboration that made the show possible.
ALL ABOARD
Coordinator of vocal studies and artistic director for opera Jeanne Robison usually directs operas, but she recalls a specific incident that sparked her ambition to present a musical with Theatre 21 and Biola Youth Theatre. While she was aboard a flight back to California from her Maine vacation a couple of summers ago, she was flipping through the channels on her seat’s TV monitor. She landed on the famous “76 Trombones” scene from “The Music Man,” in which professor and “conductor” Harold Hill helps the townspeople envision their children in a marching band. Intrigued by its large cast with actors and singers of all ages, she knew the production would flourish with the help of BYT and Theatre 21.

“It’s a fun musical, and it’d be easy for the Conservatory students who are more trained in opera or classical singing to adjust to that kind of musical because it’s an American classic,” Robison said.

Upon her return, she approached assistant professor of theatre Zachary Bortot and artistic director of BYT Michele Stevens about collaborating to bring the show to life, and they agreed. Since December 2018, the trio has been meeting to organize the production.

While the departments have collaborated in other ways, such as sharing resources and ideas, this marks the first time the departments have come together to present a full-fledged musical. With a cast ranging between ages eight to 28, each member offers a diversity of experience, whether it is an operatic voice or best backstage practices. The cast is also nearly split down the middle between college students and youth, with 48 BYT members and 42 college students who have been rehearsing since September.

“They’re all at different levels of experience and ability,” Stevens said. “Some have never been in a musical before. And that has probably been the most interesting thing—just the mix of diversity of experience, but I feel like [the college students and BYT members] have both learned from each other.”
CHALLENGE OF CHANGE
As the director, Stevens has uniquely immersed herself in the world of high schoolers as well as college students, which has been rewarding yet challenging. When she directs BYT productions, she usually establishes rehearsal times from 4 p.m. to 10 p.m. However, Stevens and Robison said it was difficult solidifying a time to gather with the college students, since everyone has a different schooling schedule. In addition, they worked with two full casts, doubling scheduling issues.

Eventually, Stevens established a six-hour block on Monday evenings as the weekly rehearsal time with the full cast, with an additional four Saturday rehearsals over the course of the semester. Throughout the week, college students met with Robison for more specific coaching. This pattern allowed both the entire cast to prepare for the production despite their different schedules.

Because the Biola Youth Theatre usually holds their productions in Sutherland Auditorium, Stevens also found challenges in acclimating to the much smaller Lansing Recital Hall. During their 16 weeks of rehearsal, they would split time between Lansing and Sutherland. However, this challenge gave the cast and crew a taste of professional theatre.

“For the students, it’s definitely a shift when you go to a new environment, but it’s pretty standard in professional theatre too that you rehearse in one place and then move in the show for tech week,” Stevens said.
THEATRICAL TRIO
As a first-time-ever production collaboration between the BYT, Theatre 21 and the Conservatory, Robison, Bortot and Stevens are thankful to have seen cast members improve in disciplines they are not familiar with and expand their skill sets. Bortot is especially thankful the production allowed the three departments to become one family, rather than separate entities.

“I personally have a vision for great collaboration between all the arts on campus, so I think this is great because it further breaks down silos, rather than each functioning as their own individual thing,” Bortot said.

“The Music Man” will be held in Lansing Recital Hall until Jan. 25. Ticket prices start at $10 and can be purchased online.