MLK Chapel: racial barriers hinder us from a beloved community

Albert Tate opened the day and multiple speakers followed at discussion based events. 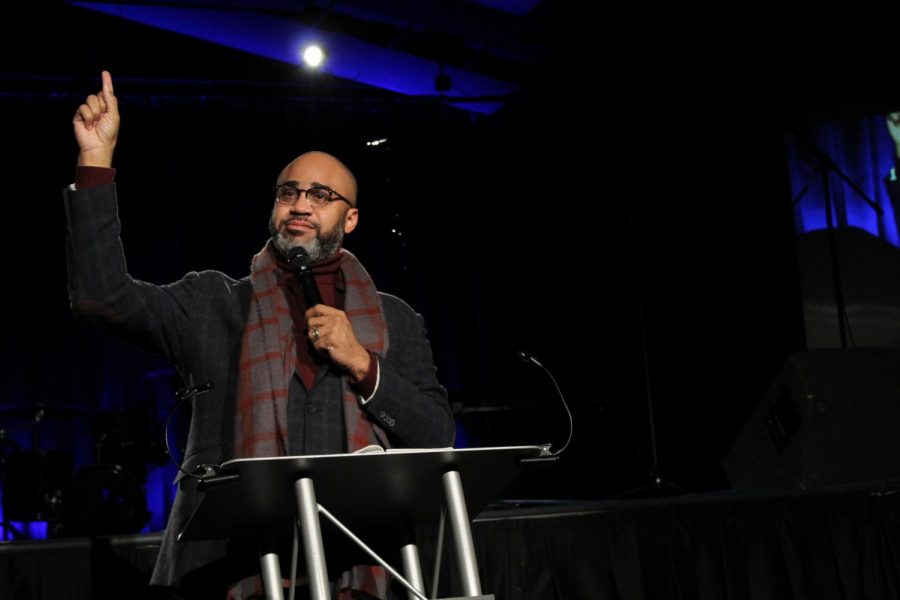 Pastor Albert Tate speaks on racial diversity and change at the 2020 MLK chapel.

“Our unity will be his witness on earth. They will see our unity, our ability to come together, our ability to be one in him,” Tate said as he opened the morning by calling students to a united front in Christ.
LEADERSHIP
He reflected on the idea that Biola’s students and rising generation are to be active leaders. He added that activism is not posting on social media, but rather mentoring youth and breaking cyclical patterns of oppression.

“I don’t care what people say, you are a leader, you are the leaders of the voices of the next generation,” said Tate.
LIVING
Tate claimed power and privilege are the “natural appetite” of racial majorities but in order to establish unity, that attitude must be rejected.

“The lion has to sacrifice for the greater good of the community. It’s in my natural proclivity towards power and authority,” Tate said. “I will deny and sacrifice so that I might walk with my brothers.”

In the same way, Tate urged racial minorities to walk in courage and take their place at the table, as God has deemed them worthy.

“For the sheep that normally run and hide because they’ve been taught from the day that they were born that they’re inferior to the lion,” Tate said. “Instead of running in fear when opportunity comes, you sit confidently at the table and you have courage as you sit in a room full of lions. And you will say, ‘I belong here just like you.’”
LISTENING
Tate admonished his audience to confront misunderstandings by listening.

“This definition of merciful means for you to stand not just in the other person’s shoes, but their whole consciousness. Stand in their full understanding,” Tate said in reference to the Beatitudes.
WORKSHOP
Later in the day, students and faculty attended an interactive workshop in the Andrews Banquet Room. Director of Intercultural Education and Research Walter Augustine opened the event by explaining the theme of the workshop: How to have difficult conversations.

“Beloved community, as pastor Tate talked about, is a wonderful vision based upon Jesus talking about this concept of unity within the body of Christ—unity amidst diversity,” Augustine said. “Yet it is not something that comes naturally… It is something we have to work at together.”

Associate professor of education Denise Reid and chair of the Undergraduate Department of Philosophy Kent Dunnington as well as Augustine also explored this topic.

Dunnington explained that a positive posture for hard discussions includes welcoming disagreement, fighting for community, fighting without violence and fighting to understand.

Augustine provided tips for having a difficult conversation, like asking open ended questions, finding areas of agreement, listening to hear instead of listening to respond and speaking to build up the hearer. He then invited the audience to open up discussions at their tables to put this advice into practice.

Senior cinema and media arts major Jane Juarez said she appreciated the opportunity for interaction as well as the topic itself.

“I think that a lot of people want to shy away from these [difficult conversations] and not open up or really put their opinion out there for fear of judgment,” she said. “What I take away from this is that you shouldn’t be afraid, speak your opinion, and enter these difficult conversations because ultimately this is what grows us as a community.”