The Eagles fought back late in the game with a 20-8 run but were insufficient in producing a victory, falling 61-69 to CUI. 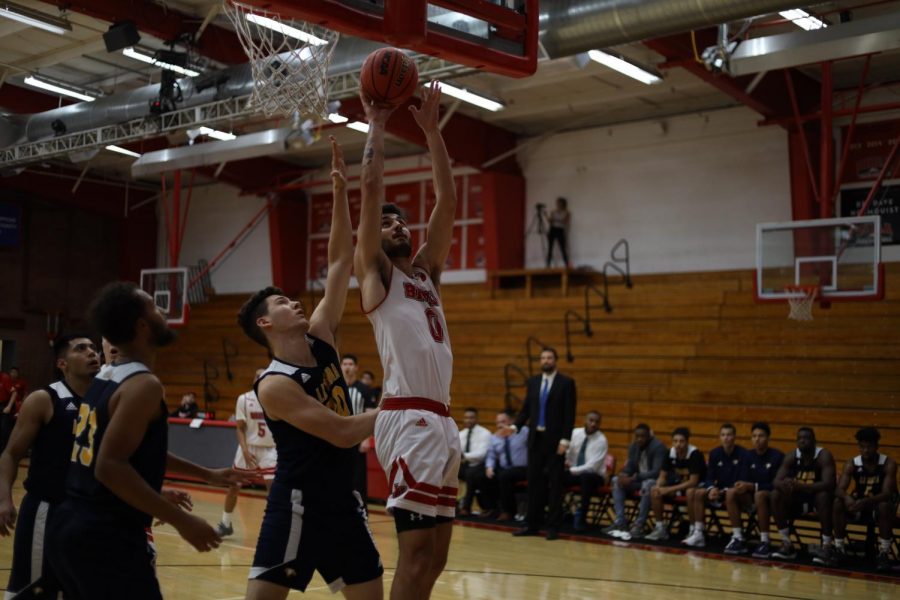 Men’s basketball traveled south to take on Concordia University, Irvine in a grueling matchup against the Golden Eagles on Thursday night. CUI’s defense remained unchecked and unmatched by Biola, who were held to an icy 5.9% shooting from three-point territory on 1-17 attempts. BU finally found a rhythm and fought back in the second half, outscoring Concordia 37-29. But it was the Golden Eagles who ultimately soared to victory, leaving Biola at a loss, 61-69.

Sophomore guard Alex Wright and transfer sophomore forward Solomon Ruddell rocked the Golden Eagles as they each crafted up individual double-doubles. Wright’s well-rounded performance on both the offensive and defensive ends gifted him 14 rebounds, 13 points and four assists. Ruddell returned home with 11 rebounds and 10 points under his belt. Junior guard Michael Bagatourian was an offensive threat, leading Biola in points with 14 along with four boards.
WON’T BACK DOWN
A sluggish start for the Eagles allowed for CUI to take control of the night early on. Remaining scoreless in over five minutes of play proved to be a critical factor in Biola’s downfall. Concordia took advantage of the Eagles’ struggles and entered the half up 16 on BU, 40-24.

Dominance continued to reign in favor of CUI in the beginning minutes of the second half. What looked to be more of the same from the first 20 minutes of play suddenly took a left turn. The Eagles started sinking shots and making stops. BU was nearly perfect from the free-throw line, securing 14-15 on the night. Finding scoring opportunities gave Biola the boost they desperately needed to get themselves back in the game. A 20-8 run late in the game gave the Eagles a glimpse of hope. The boys fought hard into the remaining minutes of play, inching themselves closer and closer to the Golden Eagles, but ultimately were unable to pull off the comeback, losing 61-69.