Despite a valiant defensive effort, the Eagles were defeated by Concordia University, Irvine, 57-63. 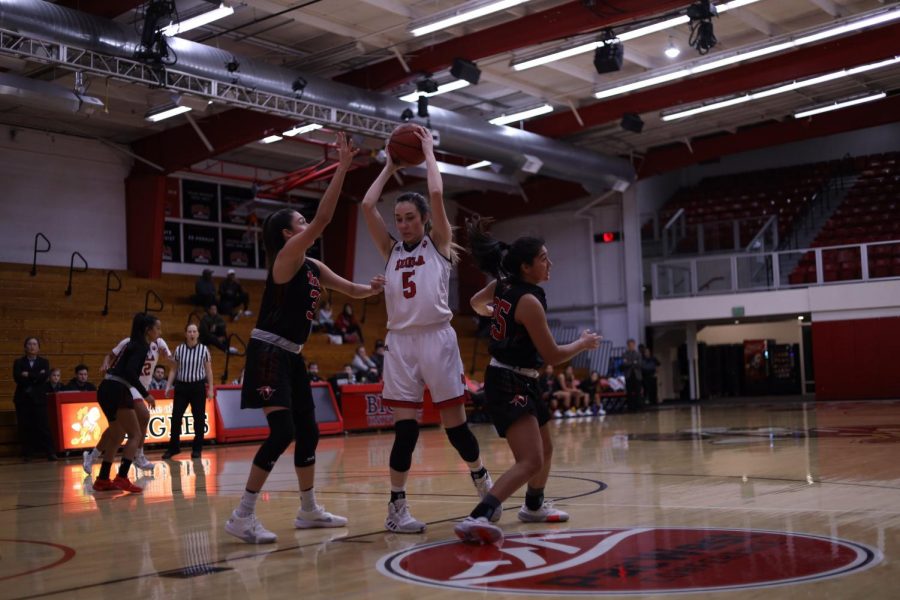 Women’s basketball traveled to Irvine, California on Thursday evening to compete against the Concordia University Golden Eagles. Biola established an aggressive defense as their goal for the night due to poor offense in their performance. However, strong defense wasn’t enough to outweigh the insufficient shooting as Biola went 22-75 from field goal range. The Eagles kept it close but ultimately fell to CUI, 57-63.

Playing her 100th game as an Eagle, senior guard Tatum Brimley led her team with 17 points and five rebounds. Following closely behind was senior forward Mikayla Green, contributing 12 points. Crashing the boards tonight was sophomore guard Aysia Johnson, with 10 rebounds that aided the Eagles against CUI. Alongside Johnson, junior forward Jazz Benn put up eight boards and senior guard Jelissa Puckett secured seven rebounds.
SHUT DOWN
In the first quarter, Biola came out strong offensively and commanded the court with five 3-pointers, putting them up 19-11 over CUI. By continuing to execute offensively, they created a solid court presence and held their lead going into the half, 29-27.

The momentum began to shift at the start of the third quarter as the Golden Eagles became more aggressive and fast-paced defensively. The back-and-forth battle continued into the remaining 10 minutes of the game with both teams tied at 44-44. However, the Eagles lost their finesse offensively in the critical moments of a close game, handing CUI a victory of 57-63.