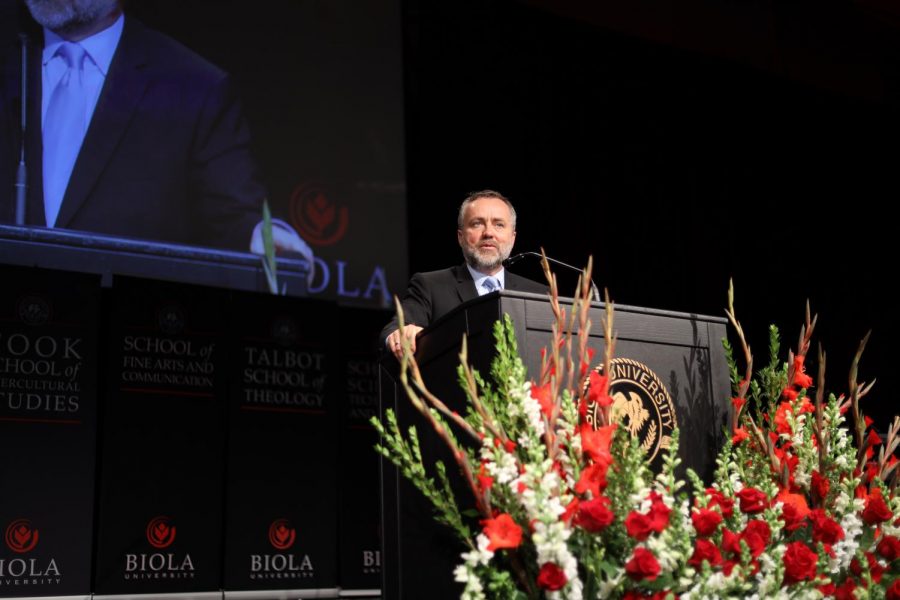 A sea of students swarmed the bleachers in Chase Gymnasium during this morning’s Spring Convocation. As Biolans settled into their seats, they joined together in worship. Afterward, Dean of Spiritual Development & Campus Pastor Todd Pickett opened the convocation in prayer, making way for President Barry Corey to take the stage and welcome in new students and new faculty members with an encouraging message. Among the new faculty is Eddie Byun, an associate professor of Christian ministry, who Corey announced during Convocation.

In the midst of raging wildfires in Australia, rumors of war and chaos, Corey stressed the importance of being a united community in his opening speech.

“With a lot going on, I pray that we support each other this year in love. All as one,” Corey said.
WHAT IS ZEAL
Corey continued his message by describing what it means to have zeal. As enthusiasm is often high in the beginning of the semester, he argued that zeal and enthusiasm should never be confused, as the two are nothing alike.

“Zeal is not dependent on the winds of our emotions,” Corey said. “It is not some highly animated, spazmatic energy that keeps you from sitting still. When Paul says zeal, he’s speaking about something that’s constant.”

The excitement of a new semester can quickly fizzle out, which Corey compared to Christians’ relationship and obedience to Christ.

“If you get all emotional in a worship set but don’t live the long road of daily surrender to Christ, that’s not zeal—that’s shallow,” Corey said. “Zeal is about daily conforming our lives to the will and character of Christ.”
ZEAL WITHOUT KNOWLEDGE
Corey concluded by discussing the vital relationship between zeal and knowledge. The president referenced Biola’s mission of teaching students to use both zeal and knowledge in order to serve Christ and people. He urged students to grow in both of these areas this semester, as a way to reach the world and minister to people properly.

“By the integration of your spiritual zeal and your desire to learn, this coupling of soul and mind equips you to be a faithful presence in your world and encounter the intellectual life at Biola, deeply drinking from the well of knowledge as writers, readers, researchers, communicators and artists,” Corey said. “Biola University is nothing if it is not a place where we convey the essential and inseparable nature of zeal with knowledge.”