The Eagles fell to Point Loma Nazarene University in a nail-biter, 81-78. 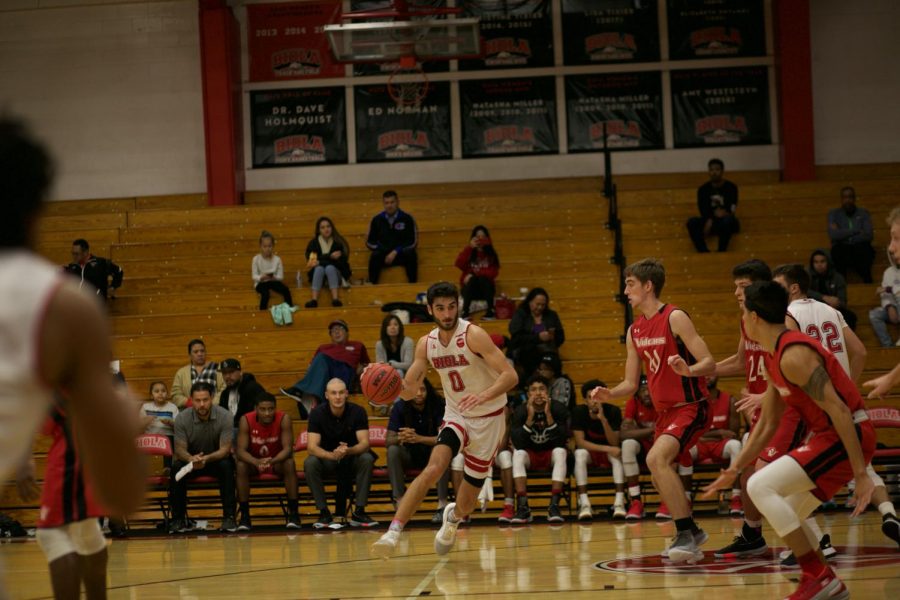 Men’s basketball traveled south to San Diego on Saturday evening to take on Point Loma Nazarene University, looking to extend their seven-game winning streak. The Eagles were in a back-and-forth battle for the lead throughout the game. The Sea Lions were on top at the end of the first half, 41-37. While BU managed to fight back with 41 second half points, it was not enough to outdo PLNU, who snagged the PacWest conference victory, 81-78.

Junior forward Jesse Elrod shot 100% from the free-throw line, where he found six of his 22 total points. Sophomore guard Whitten Dominguez helped lead the Eagles on the offensive and defensive end with 18 points, five rebounds and three assists. Junior guard Chris Rossow contributed 15 points, five rebounds and four assists to the Eagles’ efforts. Junior guard Michael Bagatourian and sophomore guard Alex Wright were a power force in the paint, combining for 16 total rebounds.
BACK-AND-FORTH BATTLE
The Eagles’ poor field goal shooting in the first half was equaled out by their near perfect free-throw percentage, going 14-15 from the line. BU had the lead halfway through the first 20 minutes, but lost it when the Sea Lions started hitting deep shots. Even with their early offensive struggles, BU managed to go into the locker room down only four points, 41-37.

The second half showed more promise from the offensive end, where the Eagles shot 55% and ended the night with 30 points in the paint. The Sea Lions’ 18 bench points were a big factor in PLNU’s late game success. Biola had the game tied at 76 with just one minute remaining, but the Sea Lions came back with five fastbreak points to top the Eagles, 81-78.