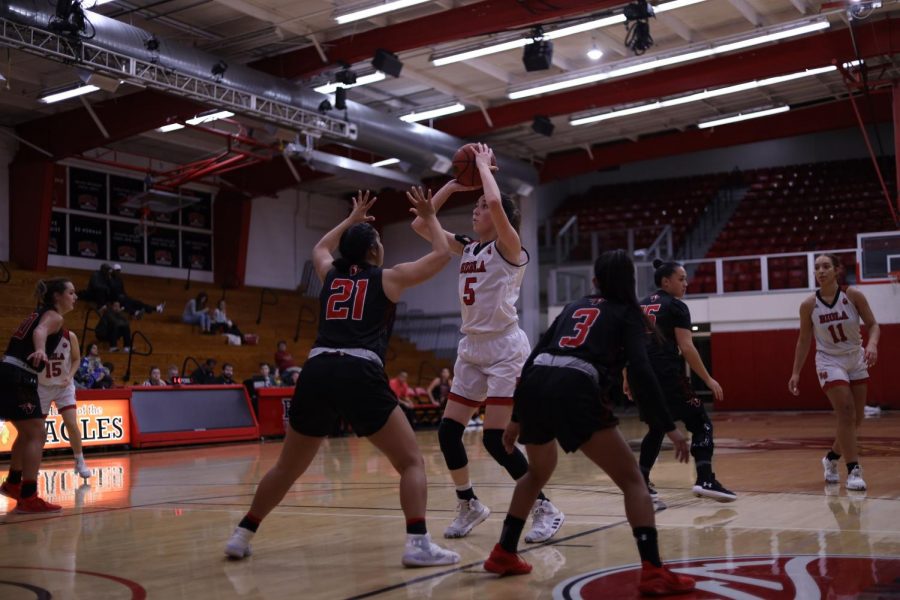 Women’s basketball traveled to Point Loma Nazarene University on Saturday, Dec. 14 for their third road game in PacWest play. The Eagles played a tough game, keeping it close with a five-point lead at the half. However, BU let their momentum slip away in the fourth, losing the game 68-63.
ESTORGA LEADS OFFENSE
Senior guard Tatum Brimley helped the Eagles to a quick start defensively with a quick steal and a rebound in the first minute. But Biola fell into a bout of fouls midway through the quarter, turning over the ball which gave PLNU the lead 13-11. The Sea Lions used their free throws to keep the game competitive when sophomore guard Danita Estorga grabbed a 3-pointer and a layup. Sophomore forward Haley Gantt hit her first bucket of the game with a minute to go-a 3-pointer which secured the Eagles’ lead 19-18 going into the second quarter.

Estorga continued the offensive momentum shooting 5-7 in the first half and scoring off a fast break possession to make the score 26-21, Eagles. Senior guard Jelissa Puckett assisted Estorga by anchoring the team’s defense. Puckett added two rebounds and two steals and tallied a block during the second quarter. Puckett drained a free throw and senior forward Mikayla Greens, assisted by junior forward Jazz Benn, scored a layup in the paint to end the quarter 37-33.

Benn claimed five points at the start of the third quarter, extending the Eagles’ offensive momentum. Biola held their early lead, 50-44, with layups from Puckett and Greens. Freshman forward Stephanie Lee stayed strong on defense with two rebounds and an assist. The Eagles ended the quarter with a lead of only one point, 56-55.

Greens scored a layup to start the fourth quarter and would eventually end the game with 13 points from the bench. The Sea Lions worked their way past the Eagles to make the score 62-60 with just over two minutes to go. Brimley responded with a clutch jumper that brought her total for the game to 10 points and tied up the game 62-62. Biola fell short in the final moments to several free throws from PLNU and lost for the first time in PacWest play, 68-63.

Estorga led the team with 16 points, four rebounds, one steal and one block. Brimley trailed close behind with 10 points, two rebounds and two steals. Overall, the Eagles played a strong game on the road and will stay ranked in the top four in PacWest play.