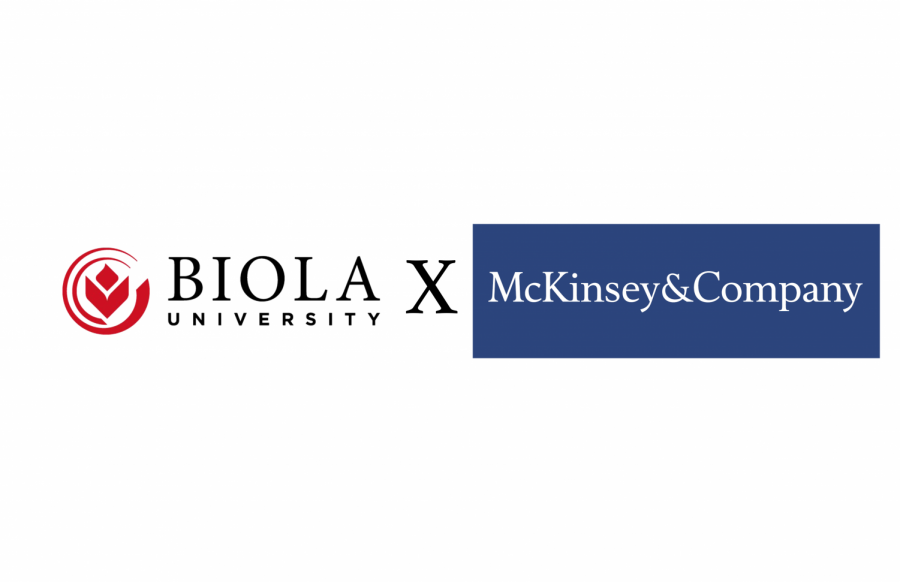 Biola recently announced a partnership with McKinsey & Company, a consultancy that’s globally recognized among the top three management consulting firms. As the university prepares for an upcoming demographic shift in graduating high schoolers, McKinsey will guide the university to set goals for the next 10 years.

However, McKinsey has recently faced extensive media attention for its alleged unethical business practices. Both McKinsey and Biola dismiss these claims as misrepresentations of McKinsey’s work.
BIOLA OF THE FUTURE
In a press release, the school said it foresees a significant decline in the upcoming decade of recruitable high school graduates and a rise in religious “nones”—those without religious affiliation. These challenges led the President’s Cabinet and Board of Trustees to unanimously select McKinsey to provide outside counsel regarding two significant goals: “optimizing the Biola of today and envisioning the Biola of tomorrow.” The project is owned and fully funded by the Board of Trustees, but will be carried out by the President’s Cabinet.

“I am excited about discerning what it will take for Biola to be a thriving university two decades from now, open to creative, efficient, effective and sustainable ways of keeping us educationally excellent, missionally faithful and financially strong,” President Barry Corey said in a press release.

The university said McKinsey began its work on Dec. 2 and is assessing Biola’s potential as the school envisions the Biola of 2030, analyzing studies and seeking feedback from the Board, senior leadership, faculty, staff and students. The Board seeks to review the consulting firm’s first deliverables in January 2020, with final review and approval in May. The plan will then be shared with the community in Summer 2020.
OPIOIDS, ICE & CHINA
After Democratic presidential candidate Pete Buttigieg’s time as a management consultant for McKinsey brought the consulting firm into the national spotlight, the company has faced media scrutiny for consulting advice given to opioid manufacturers, authoritarian governments and Immigrations and Customs Enforcement.

Earlier this year, McKinsey was entangled in lawsuits that accused them of advising pharmaceutical companies to increase opioid sales, which exacerbated the opioid epidemic. According to the New York Times, in Oklahoma’s case against Janssen—Johnson & Johnson’s pharmaceutical subsidiary—the state brought up McKinsey’s PowerPoint presentation to Janssen in 2002. In the presentation, McKinsey asked, “Are we properly targeting and influencing prescription behavior in pain clinics?”

“McKinsey recommended ‘targeting and influencing’ doctors who specifically treat back pain in the elderly and those in long-term care,” the Times reported. “The consultants also advised the company to move physicians who were ‘stuck’ in prescribing less potent opioids into prescribing stronger formulations.”

In Massachusetts’ case against Purdue Pharma, documents from 2013 showed that McKinsey recommended that Purdue Pharma “turbocharge” the sales of OxyContin, which the FDA categorizes as a strong medication that has a high risk of abuse.

Now, McKinsey says they no longer work with companies that produce opioids and that their work was intended to support the legal use of opioids.
MCKINSEY’S ICE AGE
After interviewing those who had worked for both ICE and McKinsey to enforce the Obama and Trump administrations’ immigration policies and reviewing 1,500 of the agency’s documents, ProPublica reported that McKinsey had advised ICE to cut spending on food for migrants and medical care and supervision for detainees. The New York Times found that McKinsey did more than $20 million in consulting work for the agency.

“As a firm, we are committed to supporting the United States’ legacy of welcoming immigrants,” they said in a statement. “We believe that our firm, the United States and the global economy are strengthened by the mobility of diverse talent.”
‘WE DO NOT SUPPORT OR ENGAGE IN POLITICAL ACTIVITIES’
According to the New York Times, McKinsey advised several of China’s state-owned companies, even though the nation has been urged by a United Nations committee to end mass detention of Uighurs, one of the country’s Muslim minority groups. The same report also cited examples of how McKinsey’s work has supported controversial authoritarian governments like those in Saudi Arabia, Russia, Ukraine and Turkey.

“Like many other major corporations including our competitors, we seek to navigate a changing geopolitical environment,” McKinsey said in a statement published by the New York Times, “but we do not support or engage in political activities.”
BIOLA PRAYERFULLY CONSIDERS
Biola is aware of the allegations against McKinsey, but the university underscored its confidence in McKinsey’s ability to uphold Biola’s religious tenets and mission.

“We have discussed these allegations with McKinsey and, having heard their account of what happened, are assured that they remain the best fit to help the university successfully complete this important work,” the university said in a statement. “If at any point we have questions or concerns about their work, we have contractual options to end the agreement.”

The university described the initiative as “Biola-led” and says many of those on the team McKinsey has assigned to work with Biola share the university’s faith values.

“Biola’s leadership will prayerfully consider McKinsey’s recommendations in light of Biola’s culture, mission and ethos to determine which recommendations will be implemented,” the school said.