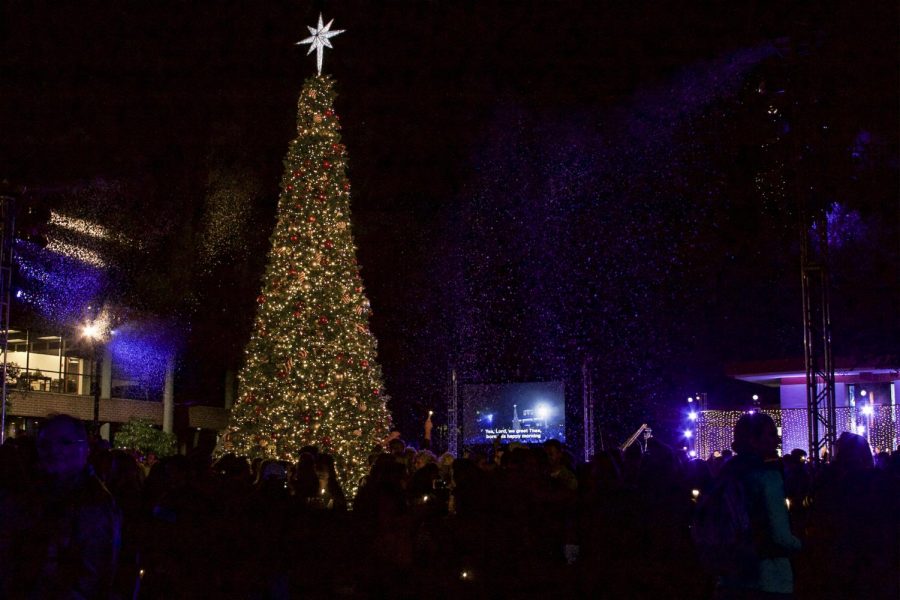 Christmas music filled the air as students, alumni and faculty gathered on Metzger Lawn for the much anticipated annual tree lighting on Wednesday evening. The event was originally supposed to take place a week earlier on Dec. 4 but was postponed due to weather conditions. The delay did not seem to affect the event’s attendance, as attendees flooded the entirety of the lawn to celebrate the Christmas season.
HONORING CHRIST AND VETERANS
Senior Director of Alumni and Parent Relations Lily Tsau introduced California state Sen. Bob Archuleta to the audience. Archuleta visited the campus for the first time earlier this semester during the opening of the Veteran Center and came back tonight to continue supporting Biola and its veterans. Tsau and Archuleta explained that although Christmas is the main focus of the event, the active military or veteran students and alumni were also being commended tonight.

“We also want to honor our active military,” Tsau said. “Those who are serving or have served have answered their call, even daring to die for all.”

Senior biblical and theological studies major Kevin Gallmeier was the first veteran to take the stage. He and his family talked about the gift of Christmas and shared the importance of longing for Christ at this time. Three other veterans followed—sophomore kinesiology major John Butler, biological science major Isaac Castellanos and freshman kinesiology major Destiny Vazquez-Morones—each adding Scripture about the story of how Christmas came to be.

“I think it’s awesome because there are many veterans here, especially women,” Vazquez-Morones said. “So it’s really cool that I get to stand up and show and represent, since I know not many people get to meet our community.”
COUNT DOWN, LIGHT UP
Student Government Association President Renee Waller took the stage with her father, associate professor of political science Scott Waller. The two asked the audience to light their candles as the band sang “O Holy Night,” remembering Jesus Christ’s birth, which brought light to the world.

President Barry Corey came on stage to share the story of the birth of Jesus Christ. He was followed by Student Alumni Association President Sarah Hartono and Vice President Joe Conway, who began the countdown for the official tree lighting. The crowd joined in with them as the tree’s lights flickered on, bringing the night to an end as fake snow began to fall down on them from the sky.