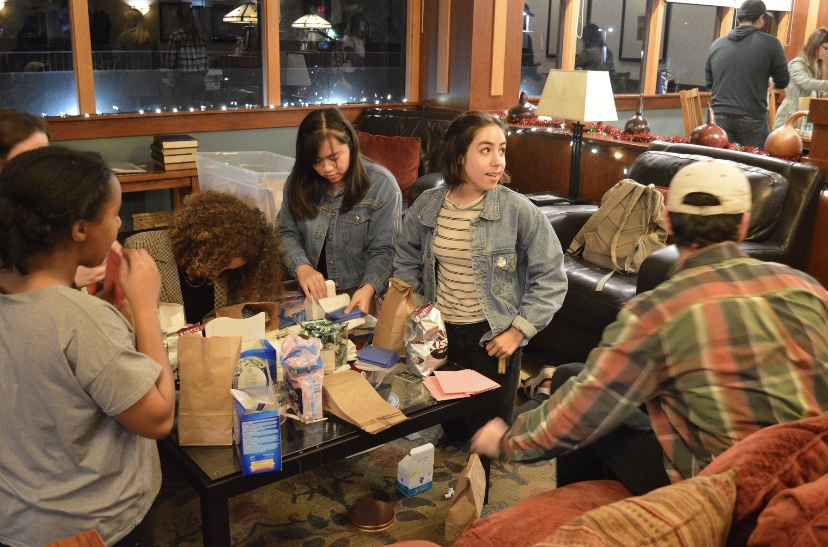 At the fourth annual GRITmas, students came together to serve homeless women by making care packages.

Christmas music seeped out of the Collegium’s front door Tuesday night, accompanied by the soft sound of laughter. Inside was a warm and cozy GRIT team at the fourth annual GRITmas, a celebration dedicated to serving homeless women by making care packages. GRIT invited the Biola community to assemble packages of pads, tampons, cleansing cloths, chocolate and a note of encouragement written by attendees of GRITmas. GRIT will deliver the packages to the Downtown Women’s Center.
NOT A CONVENIENCE, BUT A NECESSITY
Senior journalism major and co-founder of GRITmas Jasmyne Bell started this event to serve the homeless women in Los Angeles in a practical way. For Bell, feminine hygiene products are not just a convenience, but a necessity.

“[Homeless] women will sometimes take old rags and use it for pads,” she said. “Sometimes they have to think, ‘Oh, do I want to use this money for a meal or to stop myself from getting an infection?’ And that’s unacceptable.”

Bell has watched the event evolve throughout the years. The amount of packages produced has grown from around 100 packages at the first GRITmas to 400 this year.

“I think that this generation of women love the idea and action of helping other women,” she said. “I think that we really want to take care of each other and we’re over competition. And I think that it’s just a blessing to be able to come together during the Christmas season and help women who really have nothing.”
A COMMUNITY BUILT FROM SERVING
For GRIT advisor and Dean of Student Wellness Lisa Igram, this event not only reaches women outside of campus, but also ministers to students.

“I think what I love about it is that you can have a conversation and build community with people you don’t know by focusing on a third thing that’s a really good thing to be doing,” she said.

Alumna Whitney Barnard, who was involved with GRIT while at Biola, said GRITmas was one of her favorite events to attend. She explained that the event allows students to step out of their own world and focus on the needs and hardships of others.

“I think, even if it’s once a year that were able to do this, it’ll change people’s lives,” she said. “Right now is a stressful time, especially for those experiencing homelessness, especially with the cold and the weather changes, so it’s just a little thing to kind of help relieve that stress for them.”

According to Igram, GRITmas highlights the privileges that students often take for granted, including things as simple as hygiene products.

“It’s a great way to celebrate Christmas, but also give back and think about people who don’t have the privileges that we have, and how to support those who really, really need it,” she said.