The Eagles beat Hawaii Hilo University to earn their third conference win of the season, 74-56. 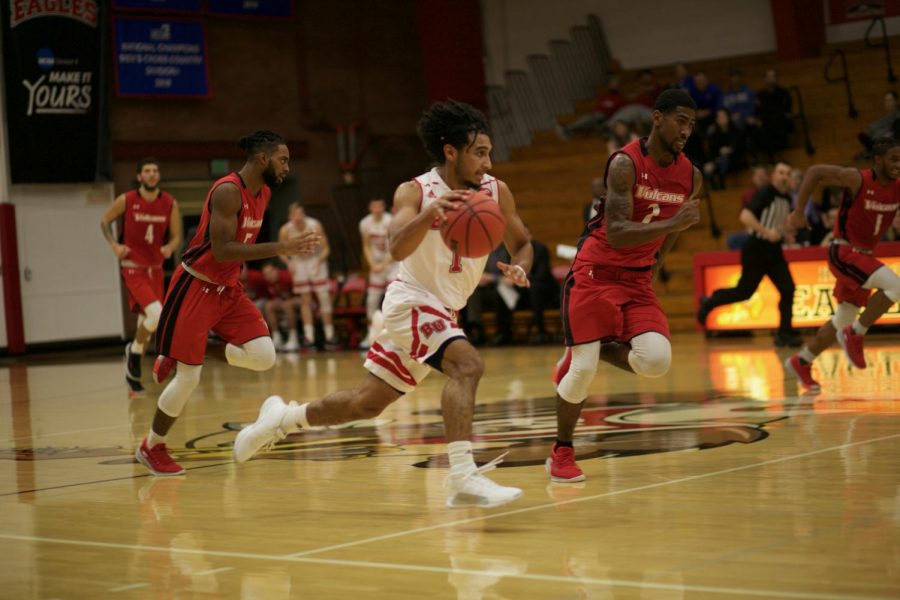 Men’s basketball advanced their winning streak to seven after a victory over Hawaii Hilo University on Tuesday night. The Eagles are now 3-0 in the PacWest conference. BU was led to a 74-56 win by senior point guard Marquise Mosley, who scored 18 points and had five assists.

Along with Mosley, the pair of junior forwards Jesse Elrod and Michael Bagatourian gave the Eagles a boost on their way to the win. Elrod finished the game with 17 points and four rebounds, while Bagatourian was just two assists away from a triple-double, totaling 15 points, 14 rebounds and eight assists.
DEFENSE WINS GAMES
In the first half, BU held the opposing Vulcans to just 17 points on just 22% shooting. This tough defense, combined with 55% shooting from the Eagles, prompted a 19-point lead for them at the half.

“We played super hard, we did a great job of boxing out and hustling on defense,” said sophomore guard Whitten Dominguez. “That was one of the biggest things we wanted to improve on. We had been talking about that because we had only been showing it in little spurts in the past games. I feel like we did a great job of doing that the whole game.”

Dominguez finished the game with three points and six rebounds.

While the Vulcans cut the lead to 11 toward the end of the second half, they were never able to capitalize. After two big dunks by sophomore Solomon Ruddell, the Eagles soared through the final four minutes of the game, finishing with a score of 74-56. Ruddell had eight points and seven rebounds on the night.
LOOKING AHEAD
This was the Eagles’ third conference win of the season, putting them atop the PacWest standings.

The Eagles (7-2 overall, 3-0 PacWest) will travel to face Point Loma Nazarene University next on Saturday, Dec. 14 at 4 p.m.