The Eagles nearly doubled Hawaii Hilo’s points as they advanced further in their seven-game winning streak. 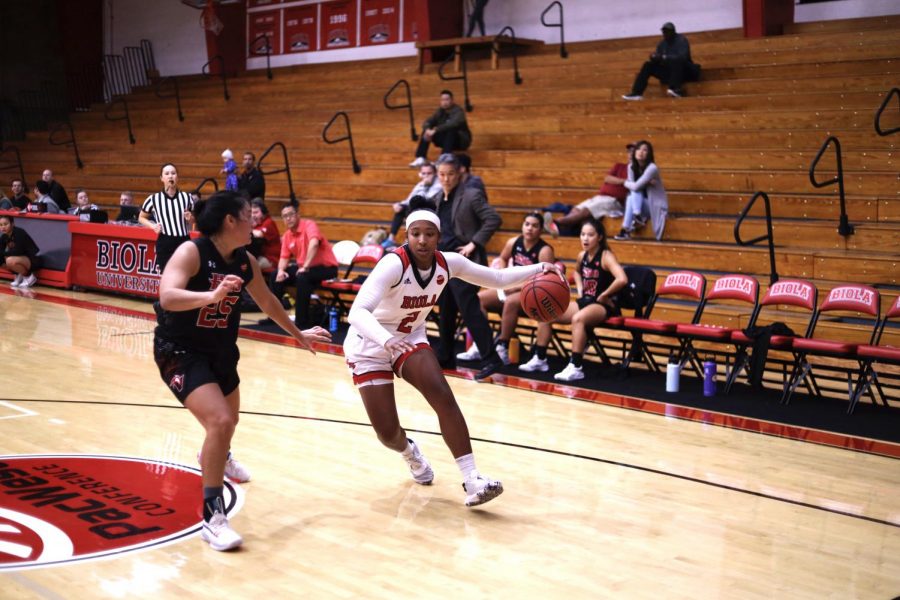 Senior guard Jelissa Puckett dribbles the ball around her opponent.

Biola hosted Hawaii Hilo University on Tuesday, Dec. 10, continuing their seven-game winning streak. The Eagles led in each quarter, proving their dominance with an incredible 61-34 win.

The Eagles had their way with the Vulcans, as sophomore guard Aysia Johnson led BU with 12 total points and nine rebounds. Senior guard Tatum Brimley went 5-8 from the field, granting her 11 points and four assists. Sophomore guard/forward Danita Estorga also earned 11 points, along with seven rebounds. Senior guard Jelissa Puckett rounded off the night with 10 points of her own.

“We’re ready to work from the jump—‘Strength in numbers’ is our mantra,” Puckett said.
EAGLES RALLY ON
The Eagles had a fiery start as they came out strong with a nine-point advantage in the first quarter. Even though they only shot 38.8%, Biola still managed to outperform the Vulcans on the offensive end. They continued this pattern throughout the half and went into the locker room up 35-19. The third quarter started slow, but the Eagles still held the lead. In the final minutes of the game, the Eagles kicked their offense into high gear and finished out the night with 30 defensive rebounds and 14 fast-break points, ultimately leading BU to a 27-point victory.

The Eagles (7-2, 3-0 PacWest) look to gain another win in the PacWest Conference as they head to Point Loma Nazarene University on Saturday, Dec. 14 at 2 p.m.