Swim and dive shatters records at the Collegiate Winter Invite

Freshmen Kellynn Hayes and Patrick Waggoner wrote their names in the record book. 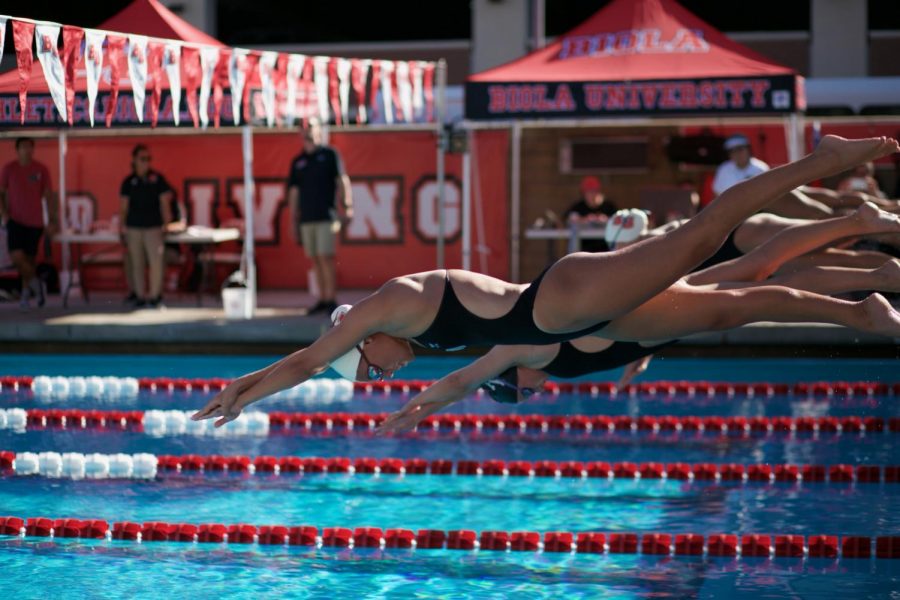 Biola swim and dive traveled to Monterey Park, California for the three-day Collegiate Winter Invite. The men rounded out their final fall competition in first place with 1,388 points and the women in fourth with 1,303. Biola shattered five school records in the pool and earned their very first NCAA Division II provisional qualifying time.
HAYES OWNS DAY ONE
Freshman Kellynn Hayes was the star on the women’s side on day one. Hayes swam the 500-freestyle finals in 5:03.70, adding her name to the record holder’s list for Biola Aquatics. The Eagles dominated the 500 event with a second and third place finish from freshman Koyla Vos and freshman Audrey Vermuelen. Although these finishes pushed Biola higher in the standings, the women did not stop with individual wins. The Eagle’s 400-medley team of freshman Julia Zulker, sophomore Kasidee Pascoe, sophomore Alyssa Trejo and freshman Kristina Arcerito, took first with a time of 3:53.32.

The men also grabbed a win in the 400-medley. Sophomore Clayton Owens, sophomore Colin Reeve, senior Raymond Kam and freshman Patrick Waggoner earned a time of 3:29.38, edging out the next closest team by nearly three seconds. Waggoner claimed a runner-up spot in the 200-yard individual medley and a top-three finish in the 200-freestyle.
EAGLES STAY ON TOP
Freshman Liza Parahnevich and sophomore Katelyn Harper swam to first and second place, respectively, on day two for the women’s 400-yard individual medley. Parahnevich helped her 800-yard freestyle relay team, of Pascoe, Hayes and Vos to a first-place victory, with a time of 7:45.78. The Harper sisters, sophomore Katelyn and senior Bethany anchored BU’s second 800 team to a third-place finish.

On the men’s side, Reeve, Kam, freshman Alex Ness and senior Andrew Benson took first place in the 200-yard medley relay with a time of 1:35.67, topping Chapman University by less than a second. Waggoner continued to dominate with a first-place finish in the 200 freestyle. The Eagles ended day two in first place, managing to stay ahead of rival Concordia University Irvine.
DAY THREE SEES RECORDS BROKEN
Biola saw success in the water on Sunday, with four school records broken on the last day of the invite. Hayes and Vermeulen both swam faster than the Biola record in the 1,650 freestyle, Hayes with a time of 17:43.43 and Vermeulen with 17:50.23. Paranhevich continued to turn heads with a record breaking swim in the preliminary race of the 200 backstroke. The freshman broke her own record later in the day in the final with a time of 2:05.90.

Waggoner wrote his name in the record books with a first-place finish in the 200 butterfly at 1:54.57. Another victory for the men came in the 400-freestyle relay from Jonas Huckabay, Tanner Smith, Ness and Waggoner. The Eagles swam 3:07.35 and barely surpassed Concordia who took second place. Freshman Gabe Weber also grabbed a record with a 9:44.06 in the 1,000 freestyle.

Overall, the Eagles reigned champion of the pool beating eight other teams on the men’s side and five on the women’s. The Eagles concluded their fall season and will be back out in the pool on Jan. 3 for the Chris Knorr Invitational in Thousand Oaks, California.