Todd Elkins steps down from Eagles Athletics after 16 years with Biola. 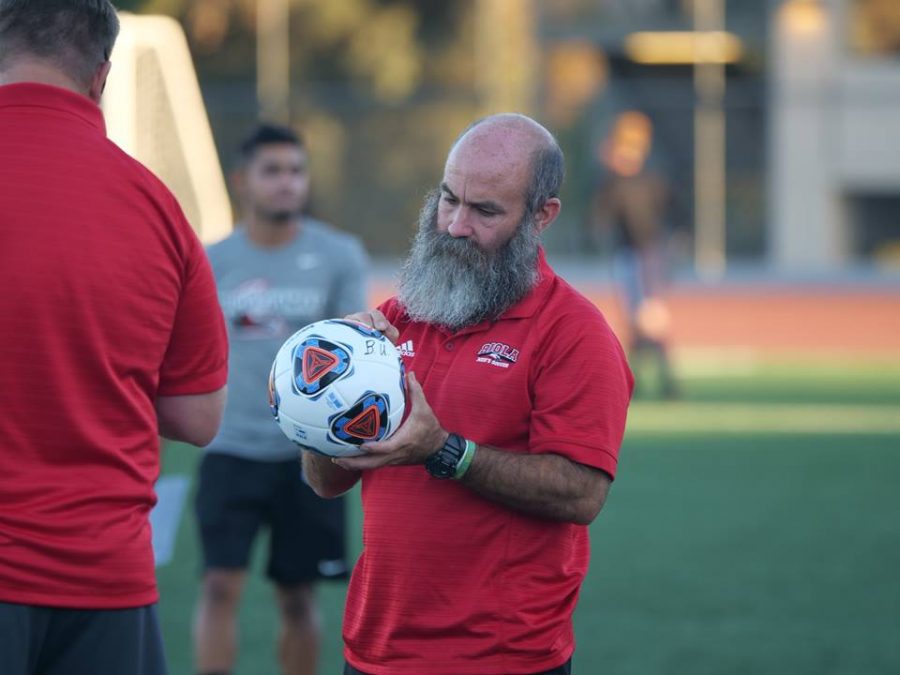 Todd Elkins coached soccer at Biola for 16 years before stepping down.

Twenty-eight phones buzzed with a message on the morning of Nov. 20, notifying each member of the men’s soccer team of an urgent meeting. Four days prior, the Eagles had finished their season with their second straight come-from-behind win, this one on the road against Fresno Pacfic University. When the players gathered on campus, there was a notable absence—head coach Todd Elkins, who had been at Biola since 2003. That same evening, Athletics officially announced that Elkins had suddenly stepped down from his position.

The news delivered in the meeting that morning stunned every member of the team, including its senior captains.

“Todd Elkins has been a devoted coach and mentor to countless student-athletes. He has been a beloved member of our athletics staff and will be missed for his kindness, sense of humor and wise perspective. We wish him and his family the best,” said Athletic Director Bethany Miller in a statement accompanying the announcement.

Miller, Elkins and his former assistant coaches declined to comment further on the announcement.
PLAYERS BLINDSIDED
“I was really surprised because I had just met with him, we were talking about the future of the program,” said junior redshirt Luis Rodriguez. “I don’t know, it just didn’t seem like that was something that was even on the radar for him to step down.”

Players set to return the next season were led to believe that Elkins would continue his role as head coach.

‘I was pretty sad and it just felt weird not knowing why he left. So that part brought a little bit of anger like ‘Oh, why won’t they tell us?’” said senior defender Alejandro Pelayo. “I know his character and I know he’s a really good guy and a good coach.”
FAITH-BASED CULTURE
Elkins spent nearly two decades with Athletics, crafting a soccer program centered on Christ. Junior forward Jack McDonald emphasized how several players came to Christ under the leadership of Elkins in the last two years. The faith-centered foundation Elkins’ created for his team allowed them to realize soccer is more than just a game, but rather an opportunity for the men to come together and deepen their relationship with God.

“Even though our goal is to win, it’s to win in a way that will honor God and [Elkins] was big on that foundation and team culture,” Rodriguez said. “I know that he spent a lot of time just praying for us and checking in on us if he knew something was going on. He cares about us being men and men of God more than just being an athlete or a player on his team.”

The way Elkins lived out his relationship with Jesus, in both action and prayer, significantly impacted the faith lives of athletes on his team. He demonstrated a Christ-like life within the world of athletics, which is contrary to many past examples the players had encountered.

The theme of family embedded in the men’s soccer culture also stemmed from the example of Elkins’ own family. Mrs. Elkins cooked for the team multiple times a month and supported the team as a whole.

“I grew up in a broken home, so for me family and marriage was never in the picture,” said an emotional Rodriguez who learned that a life centered around God can cultivate a stable family environment.
EXPERIENCED ELKINS
Elkins began his career at Biola in 2003 as a women’s assistant coach and moved to head coach of the women’s program in 2008. During the 2014-15 seasons he coached both the men’s and women’s teams. Erin Brunelle, an assistant coach of Elkins, transitioned into the women’s head coach in 2015 to lighten Elkin’s load. Since then, Elkins has spent the last three years pouring his time and expertise into the men’s soccer team.

During Elkins’ seven seasons leading the men, he constructed a 70-44-14 record. The 2019 Eagles earned a winning percentage over .500, with a record of 8-7-3 during Elkins last season, their first as full-fledged members of NCAA Division II.
NEW COACH, SAME CULTURE
Biola athletics is now beginning the search for a replacement. Returning players are hoping the core of their faith-based culture will remain the same, even with a new head coach. Rodriguez embodied this statement by asking that the future coach “buy in” to the foundation established by Elkins and their captains.

Elkins incorporated team devotionals before practices and games which became the cornerstone of their culture. Many players spoke highly of the devotionals and the time Elkins provided for worship.